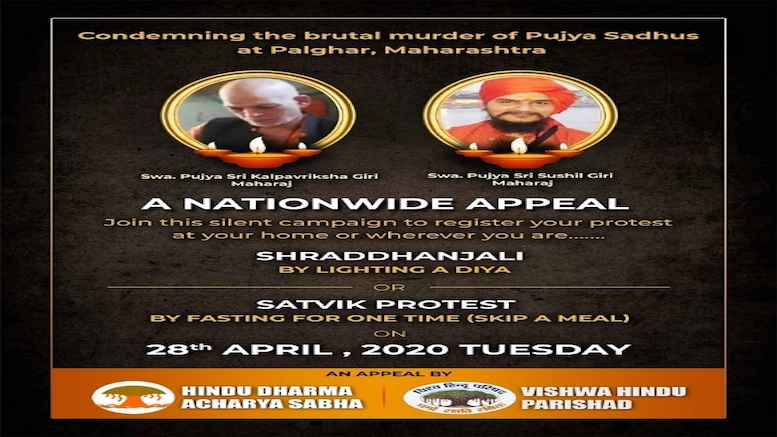 Hindu Sadhus and organisations across Bharat are coming together in an unprecedented manner to protest the brutal lynching of 2 sadhus of the Juna Akhara in Palghar, Maharashtra.

Today, sadhus and followers of other Hindu organisations across Bharat will be on fast and offering prayers to pay tribute to Sri Kalpavriksha Giri Maharaj, Sushil Giri Maharaj, and their driver Nilesh Telgade who were brutally lynched by a mob on April 16 in Palghar, Maharashtra while police stood watching. This ‘Satvik Protrest’ initiative spearheaded by Juna Akahara & Hindu Dharma Acharya Sabha is also demanding to fast track the judicial process in the matter. Vishwa Hindu Parishad (VHP) has appealed to the entire nation to join the ‘Satvik Protest’ by lighting a diya (lamp) and fasting for one time on April 28th.

The VHP in a press release has also put forward a memorandum addressed to the President of Bharat through the office of Governors of the state/UTs. The memorandum demands a high-level inquiry into the gruesome Palghar lynching of the Sadhus and severe punishment for the killers and conspirators.

Earlier, other Hindu bodies like Akhil Bharatiya Akhara Parishad, Sringeri Math, ISKCON and others had also condemned the brutal lynching and demanded a high-level probe and speedy justice in the case.