Religious Fanaticism and Law of the Land – Seminar Report 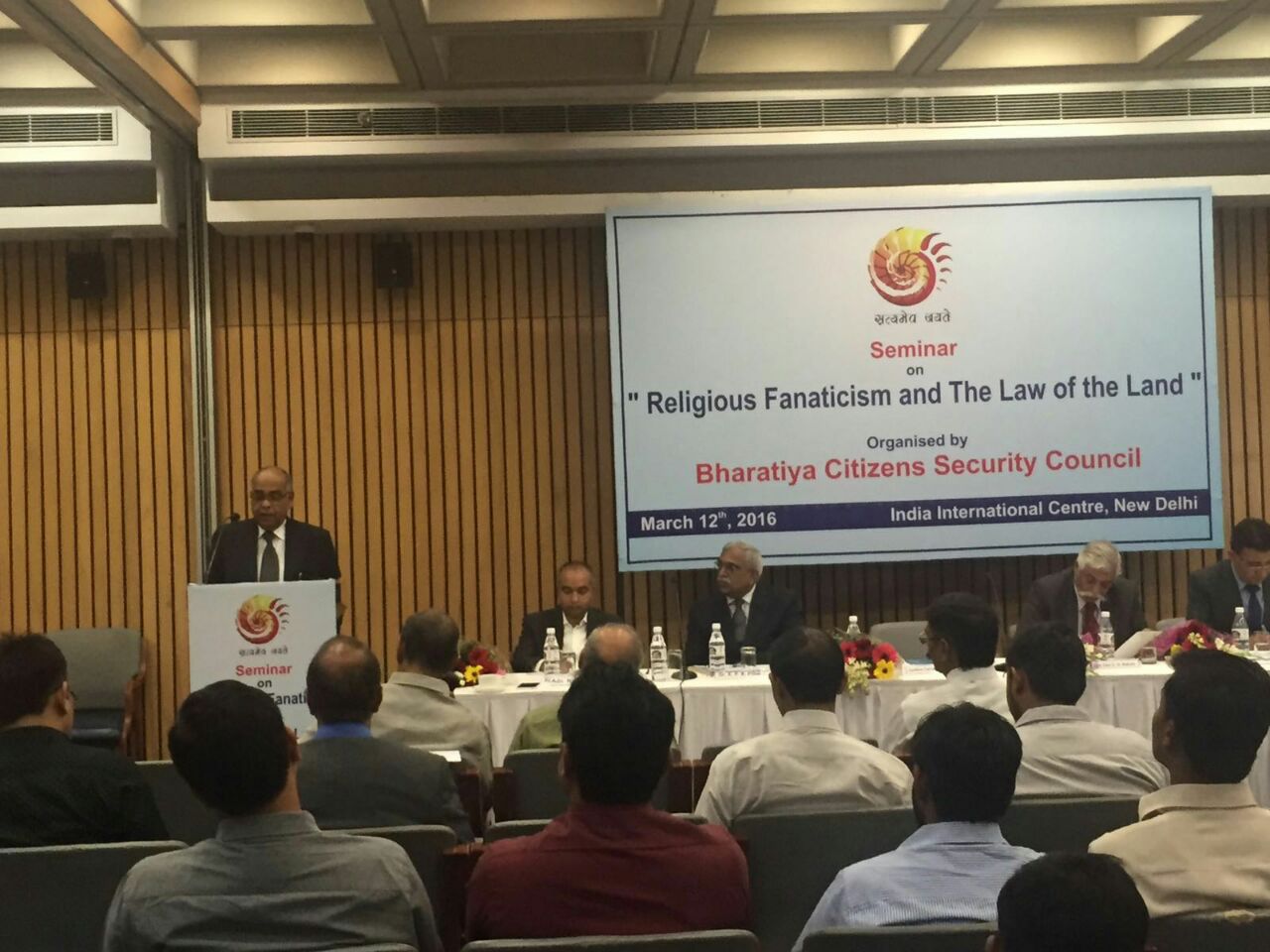 On 12 March 2016, Bharat Citizen Security Council organized a seminar on ‘Religious Fanaticism and Law of the Land’ at the India International Centre. A panel of expert speakers spoke on how to counter terrorism and religious fanaticism, within the ambit of the Constitution.

Gen G.D. Bakshi, in his thought provoking talk, praised Israel for the way they protect their people when the safety, security and dignity of their countrymen is concerned; he urged our policy makers and implementers in this country to see as clearly and act judiciously so as to protect our people. He told we have over 80,000 martyred due to terror attacks and infiltrations, which have a common breeding ground in their religion that preaches Jihad. He condemned the JNU incident and refuted their shameful remarks like ‘Men in uniform rape’; independent investigations have found that 97% of all such rape allegations were fraudulent. In genuine cases, the culprits face instant court martial – “there is no forgiveness in the army,” he said. These allegations are often made on the Army by vested interests with an aim to demoralize the Army, and create discord between civilians and the Army. He also condemned the acts of those human rights organisations who only see the violation of rights of terror perpetrators, but turn a blind eye to the human rights of victims.

He gave the example of how liberal communism led the peace loving teachers of France to remove the stories of bravery and gallantry of their warriors and soldiers from the school curriculum; this lowered the French fighting spirit and helped the Germans in their invasion of France. He warned us not to repeat the same mistake and learn from world history. Our children and all generations must know the real history, struggle, challenges faced by our brave ancestors. The story of Bangladesh war gave goosebumps to many present in the hall. Mr Mendi Safadi from Israel threw light on their unique and probably the most successful approach to deal with terrorism.  Since Obama killing Osama did not lead to the end of terror from the world map, we must identify and target the creator of terror and differentiate it from the instruments that play it, he said. Individuals like Osama and outfits like ISIS are only the products of such creators who actively work in madrassas (Islamic religious schools) reaping a crop of Jihadis by intoxicating young minds and turning them away from humanity.

He emphasized that the tools of democracy are a green house for terror, so we must find and tackle the sponsors of terror. Educated European jihadi attackers prove that good education and good life style is not what can change them and their mindsets. Israel faces 2 to 3 terrors attacks daily. He said, “Israelis wants peace but also want to save their people. After all, what good is the lull of the graveyard in the name of peace.”

Justice Cyrian Joseph mentioned that the word ‘Secular’ was added via the 46th amendment in 1976 (during the draconian Emergency imposed by Indira Gandhi). He said the constitution of Bharat uniquely allows one to propagate one’s religion with out allowing to force, coerce, misrepresent, or insult another for their religious preferences and practices. He also mentioned that the unity and integrity of the Nation cannot be compromised at any cost.

Dr. K.P.K. Pillai, termed fanaticism as ‘a disease of the mind’, where one is not honorable in ones’ actions. Citing the example of our very own Kashmir which was once God’s own country just like Kerala; population of Hindus is drastically reduced in both these states. Kashmiri Hindus have regularly faced genocides in their long history, and since the exodus of 1990 the valley has been cleansed of its original people. Hindus were raped and looted in Bangladesh because the then central Government was not alert. To this day, enemies of Hindus are preying on us and eating us like cancer. He mentioned that we must move beyond castes and sects and unite as citizens of Bharat.

The lively Question & Answer session raised some relevant points like the bias of Bharat’s media – news channels creating media trials and raising a furor without an iota of truth; threats of ever growing terrorism and foreign funded NGOs who are selective in their approach; and denial of justice to the common man.

The seminar was organized under the leadership of Col. D.R. Semwal, Mr. Vijay Kumar Bharat and Adv. Nishant Kanitkar of the Bharat Citizen Security Council (BCSC). The organizers expressed their thanks to Chief Guest Dr. K.P.K. Pillai and the panel of expert speakers – Justice Cyrian Joseph, Gen G.D. Bakshi and Mr. Mendi Safadi.

(This seminar summary was prepared by Liza Bhansali, a member of BCSC)