Registrations Close For ‘World Hindu Congress 2018’ Due to Tremendous Response The ‘windy city’ of Chicago, USA will play host to the World Hindu Congress 2018 and welcome icons, thought influencers, prominent leaders and members of the Hindu community from September 7th – 9th, 2018. They will gather to connect, discuss, energize and push awareness about critical issues facing Hindus worldwide and figure ways on how the community can be globally significant and impactful. The event is being hosted at Hotel Westin in Lombard, Illinois.

A digital billboard placed on a main highway in Chicago flashes a message about the World Hindu Congress (WHC) every 40 seconds and has been seen, at last count, by 1.5 million drivers. 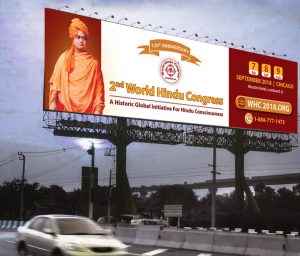 Registration coordinator Amitabh Mittal stated that registration has been closed two months prior to the event due to the tremendous response. A few spots for co-sponsors are all that’s left and some spots have been reserved, on a case by case basis, for delegates from countries outside of North America.

Over 2000 Hindus from across the globe and 250 thought leaders are expected to fly in to attend the gathering. They include heads of countries with a sizable Hindu population, top tier corporate heads from both Bharat and the US, dynamic Hindu leaders and media personalities. RSS Chief Mohan Bhagwat is one of the key speakers. Tibetan leader HH Dalai Lama, Art of Living Guru Sri Sri Ravi Shankar, Chinmaya Mission Head Swami Swaroopananda, Swami Brahmavihari Das who is the Head of International Relations from BAPS, Swami Purnatmananda from Bharat Sevashram Sangh and Pranav Pandya from Gayatri Parivar will also be present at the event that has been dubbed as “the biggest Hindu gathering of leaders to date.”

The conference is being organized by the World Hindu Foundation headed by IIT, Kharagpur graduate Swami Vigyananand. It will commemorate 125 years of Swami Vivekananda’s historic Chicago address on September 11, 1893. This is the second such conference, the first was held in New Delhi in 2014.

With over 3.23 million Hindus in the US and a little over one billion worldwide, making Hindus count globally is a key issue.

Senior leaders of the organization elaborated on the significance of the conference. According to WHC founder Swami Vigyananand, wealth creation, quality education, a robust Hindu presence in mass media, Hindu leadership, unique strengths of Hindu women and Hindu organizations must be encouraged to “graduate to collective success.” This, he said, is the only way to increase our sphere of influence and have a positive societal impact.

Convener Dr. Abhaya Asthana highlighted the importance of “boosting the profile of Hindus” on the world stage. Hindus, he emphasized, need to come together collectively and establish their presence, and only then can they wield their clout to make a positive difference.

The goal of WHC, Chair S.P. Kothari said, is to “make the world understand the Hindu way and view of life not just at the spiritual and social level but also at the economic and educational level” while WHC Vice Chair Raju Reddy reflected that “Hindus are viewed as great doctors, engineers and entrepreneurs, as positive role models but they need to become change makers. This requires them to be organized.”

Leaders of the organization are confident that this will be a “historic and a not to be missed gathering of Hindus from all over the world.”

To learn about or participate in the 2018 World Hindu Congress, visit worldhinducongress.org