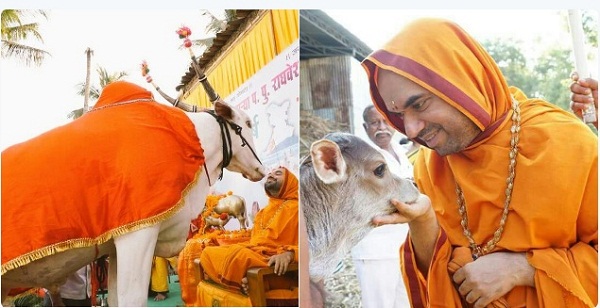 Ramachandrapur math (@ShankaraPeetha) & its mahant Sri Sri Raghaveshwara Bharathi are working to help poor Hindus for decades & are in the forefront of cow protection. Head office of the math is located in Hosanagara near Shivmogga, Karnataka.

In March 2017, a huge slaughterhouse was planned in a village called Harohalli, near Bengaluru, though villagers protested against it, Govt didn’t care much. Swami ji sprang into action, lending support to locals. Then, recently Karnataka government decided to fence Male Mahadeshwara hills endangering 75,000 to 1 lakh cows and dependent villagers. Cows were rendered fodder-less. Seer again sprang into action!

Devotees went on simple food, simple living, sacrificing one meal a week and then donating savings for cow fodder. Some devotees even sacrificed their jewelry! From this money, fodder is being bought for thousands of cows, many of which are native breeds. Karnataka government is seemingly not doing much for the rehabilitation of these cows. It is said the whole area of MM hills has been fenced for mining or so. 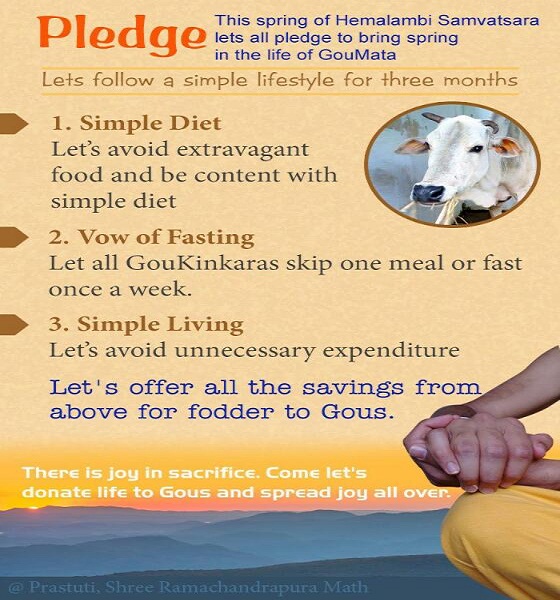 Then the devotees to the cause launched an online campaign called #GiveUpAMeal. Its a simple concept of giving up one meal a week on Monday noon and donating to this social cause. They aimed to reach a million people. They planned a unique concept to achieve this – to change the handle/ profile names to “<Name> #GiveUpAMeal” and request people to donate if possible.

On this Monday, they ran this online campaign with the message “Skip a Meal, Save, Donate for Desi Cow Cause” Result was heartening :

If you would like to inquire about the cause, or donate, here is the information as provided by math devotees :

(We thank Girish Alva for speaking to us and providing images).