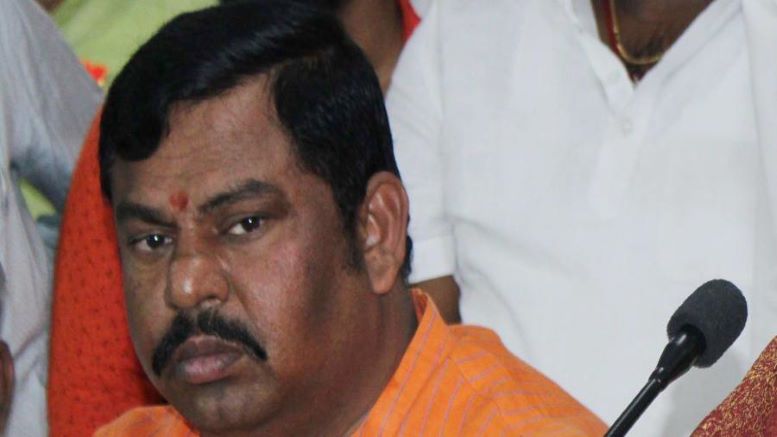 BJP MLA Raja Singh was given a one-year jail term in a five-year-old case relating to a dispute over the beef festival held at Osmania University campus in 2015. Singh moved a bail petition and was granted bail by the Nampally court which gave the MLA a month’s time to approach the high court.

As per available information, a case was registered against Singh at Bollarum police station stating that the MLA assaulted and threatened the police in addition to disrupting the beef festival organized at the university campus by some students.

An AP7AM report put out MLA Raja Singh’s reaction to the verdict. The report says:

Speaking to the media, MLA Raja Singh said thatin 2015 they gave a call to protest against organising a Beef festival in Osmania University. He said that during that incident, police arrested party workers and shifted them to Bollaram police station, said that he was also presented at that place during the incident.

He said that an argument took place between him and the inspector after police conducted lathi-charge against the party activist. Raja Singh said that the police sent a notice to him after two years. He alleged that police submitted fake witnesses against him in the court.

While the police were prompt to file a charge-sheet against Singh, they keep doing flip-flops as far as concerned leaving even the courts perplexed. AIMIM leaders always treat the police with contempt as has been evident from several cases including that of corporator Murtuza Ali obstructing and threatening on-duty cops to the Owaisi brothers abusing cops.

It is not surprising that the Cyberabad police does flip-flops or goes slow or doesn’t even taken cases into consideration if AIMIM is involved. As Hindupost had earlier reported:

The Hyderabad Police, which had lodged an instant FIR against a Hindu twitter user over a sarcastic meme, has not taken any action as yet against this venom-spewing radical. Does a threat to commit genocide, spreading fake nonsense against doctors, dismissal of a serious pandemic, not constitute a serious offence for the city’s police? Or do Hindu lives not matter in the city of Asaduddin Owaisi?

On the one hand, the Hyderabad police took immediate offense to MLA Raja Singh’s statement but it simply kept mum when the Owaisis referred to the police as khatmal (bed bugs). As pointed out earlier, AIMIM and Asaduddin Owaisi carry far greater influence with CM K Chandrashekhar Rao than these numbers would suggest. The party rules over old Hyderabad city like a mafia.

No wonder the cops had been dilly-dallying to register a case against AIMIM MLA Akbaruddin Owaisi for hate speech till they were pulled up by the courts which directed them to register a case against him. In fact, the police had given Akbaruddin a clean chit but the Karimnagar Magistrate court directed the cops to file an FIR against Owaisi after examining all the documents.

An India Today report in this matter says:

After examining the documents, the Magistrate court of Karimnagar asked three town police stations to register a case against Akabaruddin Owaisi under Section 153A (promoting enmity between different groups of religion, race, place of birth, residence and language.) of the IPC. The court also asked police departments to book Akbaruddin Owasi under Sections 153B and 506.

The double-standards of the police and administrative system is apparent in the swift action against Hindus for innocuous social media posts but leniency towards the likes of Tablighi Jamaat members, Owaisi and others for serious offences shows what ails out police system.