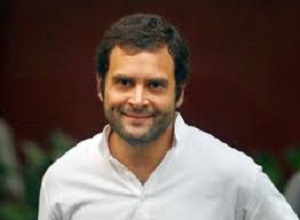 Rahul Gandhi has dragged Bhagwan Ram into his now frequent rants against Narendra Modi. Speaking at a rally in Rishikesh, he reportedly said, “Ram ji will come to Ram Leela sporting a Narendra Modi mask,” taking an ill-advised jibe over the raging Lutyens’ controversy created by Mahatma Gandhi’s photo being replaced by Modi in the annual Khadi and Village Industries Commission (KVIC) calendar.

Invading the sacred space of Hindus and dragging it down to the level of the profane, is a common practise of the Hinduphobe (communist, secular-liberal, missionary, mullah) or the juvenile minded. It is besides the point to note that Rahul Gandhi would never use Mohammed or Jesus while attacking a political rival – his speech-writers know where the buck stops as far as freedom of expression goes – but it is the utter tastelessness of his jibe which needs to be called out.

Ram Leela is the folk re-enactment of the life of Bhagwan Ram, which is traditionally performed over 10 nights to coincide with the Dussehra festival. It is an act of devotion where entire communities are involved to re-enact the timeless victory of good over evil. The reverence, love and inspiration that Ram, Sita, Hanuman and others from Ramayana evoke in ordinary Hindus is something beyond the party-hopping urbanite or the Marx-worshipping intellectual. It definitely is beyond someone like Rahul Gandhi who started doing Bharat-darshan at the age of 35, and who believes that a journey by local train and meal at a Dalit home is what it takes to understand the pulse of Bharat – of course, with each such interaction with aam junta followed by secretive foreign getaways to exotic destinations…after all, baba needs his break.

stupid remark by @OfficeOfRG . No concrete points. But sad that he makes fun of Hindu Gods with contempts and gets away

Rahul Gandhi went on to add –

“Jisne seene pe teen goli khai iss Tirange ke liye, unki photo Modi ji ne hata di” (The one who took three bullets on his chest, Modi Ji removed his image). Charkha is the blood and sweat of poor. One on hand Modi Ji takes photo with Charkha, but on the other he works for businessmen, he added further.

We will come to the ‘controversy’ created by the KVIC calendar later. A question arises – are Rahul Gandhi and his courtiers trying to equate Gandhi with Bhagwan Ram? Someone needs to drill it into the head of this ill-informed yuvraj (prince in waiting) that Ram is a timeless icon for the Hindu civilization – even Great Hindu Emperors like Shivaji, Krishna Deva Raya, Maharana Pratap, Chandragupta Maurya etc pale in front of Bhagwan Ram, leave alone modern political greats like Tilak, Ambedkar, Gandhi, Lala Lajpat Rai, Bipin Chandra Pal etc. Political parties will come and go – Ram Leela will forever be about Ram & Sita…and Ramayana.

The Gandhian stick to guilt-trip Bharat

Lets examine this obsession with Gandhi – why is Congress and every secular clone it has spawned so desperate to hero-worship one man and one Nehru-Gandhi dynasty over and above all else? Everywhere we go in Bharat – we find a Mahatma Gandhi Road, a Nehru park/stadium, or Indira nagar, or Rajiv Chowk….even at the expense of regional heroes and true greats of our civilization like Gautam Buddha, Chanakya, Charaka, Aryabhatta etc. Why does Congress and its ecosystem want to erase the collective consciousness of this nation, so that we remain forever enslaved to just a handful of figures from the 20th century?

The West often uses Gandhi and his message of non-violence as a convenient stick to beat us with – whenever they see us stepping out of line from their agenda, such as electing a nationalist leader for a change. Obama’s patronizing rebuke ‘Gandhi would be shocked at acts of intolerance in India‘ during a visit in 2015 – a comment delivered in perfect synchrony with the fake ‘Christians Under Attack’ narrative raging in Lutyens’ Delhi at the time – being a case in point. And anti-Hindu elements in Bharat do the same – keep reminding Hindus about Gandhian qualities, while studiously ignoring those very qualities in their personal lives:

Marxist intellectual: Their idol is Karl Marx, a man who said that British colonial rule was good for Bharat, a country on which he contemptuously remarked “That man, the sovereign of nature, fell down on his knees in adoration of Hanuman, the monkey, and Sabbala, the cow” (The British Rule of India, New York Daily Tribune, June 25, 1853). Marxists hero-worship brutal dictators like Stalin and Mao who killed millions in pursuit of that ultimate communist goal – a classless society. The Marxists in Bharat even call Naxal terrorists as ‘Gandhians with guns’! And then these same people turn around and with a straight face lecture Hindus to follow Gandhian pacifism.

Muslim intellectual: This breed believes that Muslim invasions were good for Bharat, as it helped build an ‘egalitarian’ society. They routinely invoke Gandhian principles of non-violence while asking Hindus to guard against majoritarian intolerance. But ask them why Hindus in Muslim dominated areas of Bharat such as J&K, North Kerala and West Bengal are suffering – and they will maintain a strategic silence. Ask them who their personal ideal is – and none will name Gandhi! Look at any prominent secular Muslim leader today – Owaisi, Omar Abdullah, Azam Khan – and ask yourself if you find even a trace of Gandhi in their conduct?

Liberal Right Wingers: This group claims to promote individual liberty – they routinely admonish Hindu society for all sorts of ills but are comparativley muted when it comes to Muslim and Christian society. Some of them advocate dialogue and open-borders for a South Asian free trade block, and remind Hindus of Gandhian forgiveness & non-violence to forget past assaults. They idolize America as the land of milk and honey, conveniently forgetting the un-Gandhian way in which that country was created by exterminating native Americans!

The fact is that Hindus of this nation have been fed the kool-aid of Gandhi worship for far too long – Gandhi was a prominent figure of the freedom struggle, but he was not the only one. That he single-handedly won us freedom is a farcical statement that does not stand the test of reason. Gandhi was a grassroots leader unlike Nehru, but like any politician he too has a chequered record – unlike his contemporaries Tilak, Aurobindo and Savarkar, Gandhi was softer towards the British & not averse to subverting inner party democracy in the Congress to get his way. And there are certain actions of Gandhi which are hugely questionable – did his support for the Khilafat movement to get Muslims involved in the freedom struggle lead to pan-Islamism being strengthened? Did he do all he could to defend young revolutionaries like Bhagat Singh from a cruel British imperial Government? Were his celibacy experiments while sleeping with young girls moral? Was his advice to Hindus to surrender themselves before marauding Muslim fanatics during the partition riots moral?

Any Hindu who truly understands our civilizational legacy, knows that ultimately we stand for Dharma. And Dharma tells us that ahimsa is the preferred way of life, unless we are faced with Adharmic forces that will not listen to reason or negotiate. In such a case, violence becomes a legitimate tool to enforce Dharma. Bhagwan Ram did finally defeat Ravana head-on in battle….he did not sit on dharna outside Lanka to melt Ravan’s heart.

By now, it is abundantly clear that the anti-Modi cottage industry will go to any lengths to pull him down, and their favorite tool is to project Modi as a narcissistic, self-absorbed, flashy dictator – an Idi Amin, Hugo Chavez, Erdogan rolled into one, if you will.

But careful scrutiny of Modi’s speeches and actions before and after May 2014 tell us that Modi has continued propagating the Gandhi-worship that is all too common in our public life. From choosing Gandhi as the brand ambassador for his flagship ‘Swachh Bharat’ campaign, to routinely praising the ‘Mahatma’ in his speeches, all that Modi has done is also gently re-introduced other historical figures like Vallabhai Patel, Ambedkar, Shivaji etc that had been long sidelined by Congress. But even this, it appears, is not palatable to the opposition and intelligentsia – who would prefer that the poor masses of this country believe till eternity that only Gandhi and his political successors – the Nehru-Gandhi clan – are their saviours.

Most likely, the KVIC decision to replace Gandhi’s photo with Modi was taken by some over-eager bureaucrat, or could even be a well-thought out move by a Congressi mole in babudom with the aim of creating just the sort of Modi-bashing outrage that we are witnessing now – The media outrage is off the charts. Sample this frothing-at-the-mouth attack on Modi in FirstPost by one Sanjukta Basu –

“While Gandhi’s solitary figure represented the ideologies behind khadi leaving gender hierarchy ambiguous, Modi’s towering figure now leads khadi with women in the background as props, making it unambiguous that from Gandhi to Modi, no matter how many regime changes happen, and what politics we follow, women will always be behind, as objects, as eye candies, as body warmers et al and the phallus will remain at the center holding all powers….That’s women’s true place, married in a patriarchal heterosexual family.”

Our English media needs a Modi-detox at once, lest they lose their minds completely. For the rest of us, this is just another manufactured outrage that we have to learn to ignore, while focusing on the real tragedy unfolding in West Bengal, or the never-ending red terror in Kerala.