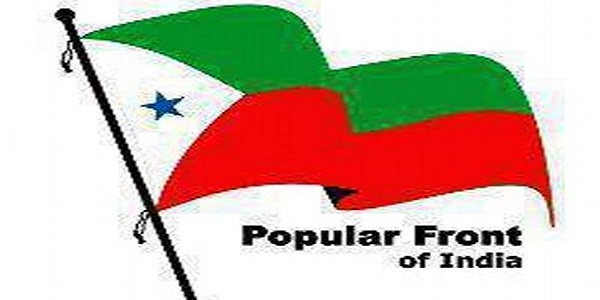 The action was taken following a proposal of the Home Department/ police on which the Law department had also given its consent. PFI has been banned under Section 16 of the criminal Law Amendment Act, 1908. The organization, which originally started in the state of Kerala, was most active in Pakur and Sahebganj districts.

The proposal sent by the Home Department to ban PFI said that it’s cadre are internally affected by Islamic terrorist organization ISIS and many of its members have also secretly gone to Syria. Significant effect of the organization has been felt in the districts of Pakur and Sahebganj.

Pakur DC and SP had recommended the PFI ban to Home Secretary. The issue was also raised in CM’s meeting. The recommendation said that PFI is working towards disruption of communal harmony in the region. The members of PFI are provoking the youth against the government and administration by circulating hateful videos.

PFI had earlier organized violent protests in Pakur district on July 5th, 2017. The rally was taken out against the clean chit given to BJP leader in matters of cow-vigilantism and murder related to child abduction.

The rally was taken under the leadership of PFI’s district president Hanjla Sheikh, Secretary Abdul Hannan and ex-secretary Habibur Rehman. There were approximately 300 members in the rally with weapons like swords and knives in their hands. The protestants blocked the road after reaching near the Pakur City Police Station’s gate. There they went on to tussle with the deputed officer and security forces.

They also tried to snatch weapons from the security forces. SDPO Shravan Kumar, Inspector Shiv Shankar Tiwari, SI Lav Kumar and Journalist Dharmendra Upadhyay got injured during the stone pelting by the protestants.  A case has been registered against 43 members of PFI regarding the matter. The members of PFI thereafter circulated a hateful video clip under the name of Social Democratic Party of India in Pakur to instigate communal tensions in the region.