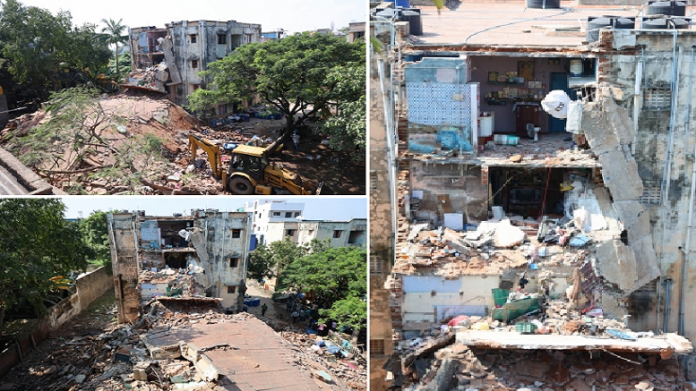 The activists in Tamil Nadu have demanded quality check of all flats of the state after a building of the Tamil Nadu Urban Habitat Development Board (TNUHBD)collapsed in Tiruvattiyoor town.

The activists have demanded a total change in the board’s quality control mechanism as well as on the quality of all old residences in the state.

J. Sebastian, Coordinator of Tamil Nadu Slum Clearance Board Residents Welfare Committee said that the government must have the commitment to conduct quality checks on the slum board flats.

He said that the recently constructed building of the TNUHDB at K.R. Park was of poor quality and so was the old building that collapsed at Tiruvattiyoor.

Venessa Peter, founder-director of Information and Resource Centre for the Deprived Urban Communities, in a statement, said that there was a need for a permanent third party quality check of the TNUHDB tenements and flats constructed across the state.

She said that preference for quality check is given to older tenements across the state with a specific timeline for demolition and reconstruction of dilapidated tenements with community participation.

AIADMK leader Sundara Ramamoorthy told IANS: “The government should immediately take action against all those who are responsible for the failure to conduct quality check in the buildings of TNUHDB and the erring officers be punished in a fitting manner.”