Pune Citizens Take to Streets in Support of Demonetization The Bharat Bandh organized by Congress-led opposition parties on 28 Nov, to protest against demonetization, turned out to be a damp squib. But the bandh call inadvertently motivated citizens, without any political affiliation, to come out on streets in support of the demonetization move.

One such citizens’ movement in favor of demonetization occurred in Pune on 28th November, and this is what one of the organizers had to say –

“As we all know, Rs. 500 and Rs. 1000 notes have been demonetized from 8th Nov, 2016 to catch the corrupt and to punish the corrupt. But it also evoked panic in people and caused inconvenience to common people of Bharat.

But it is very clear that this move of demonetization has pros or benefits – like end of hawala mafia, end of fake currency rackets, end of funding to naxals, end of Kashmiri stone pelters, blow to parallel unaccountable economy running on hard cash, end of so many troubling issues which either our army men had to face or the locals residing in border areas.

So, the question here is: either we, citizens of Bharat, understand these benefits and contribute to this biggest currency evolution or spread rumors and curse the Government for making us stand in bank and ATM queues?

I have been personally observing opinion of common people standing in queue and I found all of them to be happy about this big decision.

But then why is the Opposition cursing the move’s implementation, don’t they understand the required element of surprise in this operation? They talk about pain of common men, but where are these unhappy common men, I can’t find them. I doubt if they exist or they are made up.

To show that we Bharatiyas have welcomed this evolutionary move, we’ve organized a movement in Pune in support of demonetization on 28th Nov, 2016. Support like this have has been seen in all parts of the country, where citizens have come down on the streets to show their support to demonetization.

Here is a video of common citizens’ speaking out during the Pune event in support of PM Narendra Modi’s demonetization scheme:

Some photos from the event : 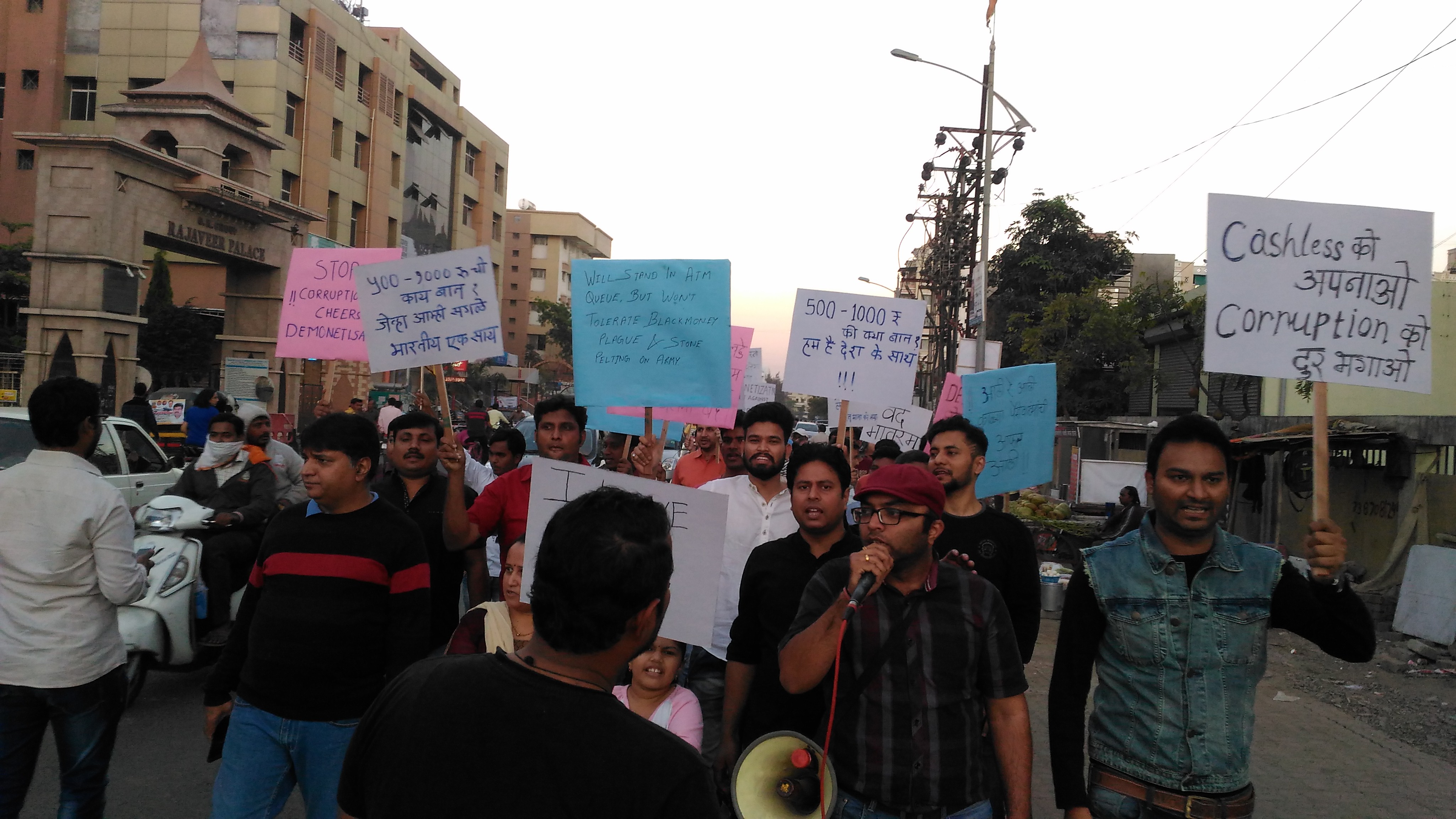 We congratulate Shri Ishwar Rajwani and other citizens of Pune who took part in this movement – ordinary folk taking to the streets in such an orderly manner to voice their opinion is a very healthy sign for our society and democracy. For far too long, such ground activism has been restricted to political parties and professional NGOs (some with dubious hidden agendas), who often resort to disruptive bandhs and violent protests to deliver their message.

The last few years has seen an awakening in the middle class who are increasingly making themselves heard with informed, cogent interventions in matters as diverse as corruption, JNU anti-national activities, assaults against women, fake ‘rising intolerance’ narrative etc. The message for the political & media elites, intelligentsia and NGO lobby is clear – they no longer control the public discourse. Mainstream media’s credibility is especially in decline due to drift from dispassionate reportage to “very aggressive, narrative-shaping” journalism. The rise of social media has also democratized opinion formation, giving space to many hitherto unknown voices with fresh insight.

The true impact of demonetization will only be known after some months, but what this movement in Pune and similar support from across the nation has shown is that the common people of Bharat are backing PM Modi in his bold attempt to tackle the menace of black money and fake currency racket. Congress-led opposition and large sections of English media are totally out of sync with the public mood, once again.