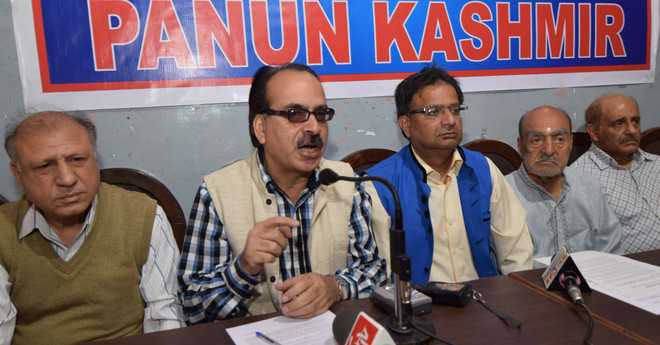 (Below is a brief of the press statement issued jointly by Dr. Agnishekhar, Convenor and Dr. Ajay Chrungoo, Chairman, Panun Kashmir on the occasion of press conference addressed at Jammu on 22.07.2016)

Panun Kashmir urges Government of Bharat to take immediate steps to prevent Kashmir from becoming another Islamist controlled territory like parts of Pakistan, Afghanistan, Syria, or Iraq. Government of Bharat needs to shun its blinkers and recognize the fundamentalist upsurge in Kashmir and parts of Jammu as a part of the global Jihad. The open movement of dreaded terrorists of LeT, HM, JeM during the separatist protests is a warning that dangers to public order, democratic set up are very grave.

Panun Kashmir insists that to evolve proper responses to the situation in Jammu and Kashmir the Government of Bharat needs to recognize that the polity in Kashmir has been captured by the Islamists. It has happened because the entire spectrum of political parties operating in the state, NC, PDP, Congress and BJP have made accommodation with Muslim separatism and communalism as the cardinal feature of their politics.

Panun Kashmir warns both Congress and BJP to desist from hiding the religious fascist nature of the unrest in Kashmir. It is unfortunate that the political class represented by NC, PDP, Congress and BJP have allowed themselves to be reduced to mere over ground support structures of the Islamists waging a Jihadi war in the state.

What needs also to be urgently recognized by the Government of Bharat is that pan-Islamic fundamentalist organizations like Jamaat-e-Islami, Ahl-e-Hadis, Allah Walles have been patronized, protected and promoted by the mainstream political parties under one pretext or the other. Many policies of the State and the political parties have allowed nourishment of these organizations. The internal encouragement and support from within to separatists many times looks like an internal sponsorship.

Phenomenal growth of the organizational infrastructure of these organizations, through proliferation of mosques and institutions, has created a huge machine of radical indoctrination and subversive penetration of the society in Kashmir as well as parts of Jammu. And this infrastructure has been built by the Jihadis using the wherewithal and sanction of the State.

We want to put it on record that if an average is taken of the persons injured in more than 700 incidents of violence by the seditious mobs in the first week of the aftermath of the killing of the terrorist Burhan Wani it will come to between 2-3/per incidence.

From any yardstick of judgment anywhere in the world it will qualify as one of the most restrained responses of the security forces particularly when mobs were not hurling only stones and indulging in loot, plunder, arson and burning of the public and private properties, but also using petrol bombs and in many instances hand grenades.

The seditious mobs have also indulged in genocidal religious cleansing attacks against the Kashmiri Hindus living in Kashmir as also against Hindu pilgrims to the holy cave of Amaranth. It is shameful that the Government of Bharat and the members of Parliament of Bharat have yet to inform the nation of these grave communal offences.

Government of Bharat and the state government have to answer the question: why is it that South Kashmir which has no boundaries with Pakistan or POJK has become a bastion of Jihadi terrorism when it has been receiving the best share in developmental activities, political power in the state? Why has South Kashmir become a leading place for narcotic related activities, hub of counterfeit currency and illegal economy? Why is it that three Universities in Kashmir valley along with the infrastructure of modern colleges and schools have become centers of radicalization?

Panun Kashmir demands that Government of Bharat comes out with a white paper on the atrocities committed against Hindus in Kashmir during the recent unrest in Kashmir.

Panun Kashmir demands that Government of Bharat takes the nation into confidence about the administrative and legal actions taken against the people indulging in seditious activities in the state as well as communal assaults against the Hindus.

(Disclaimer: HinduPost will not be responsible for the accuracy, completeness, suitability, or validity of any information, contained in this press release.)