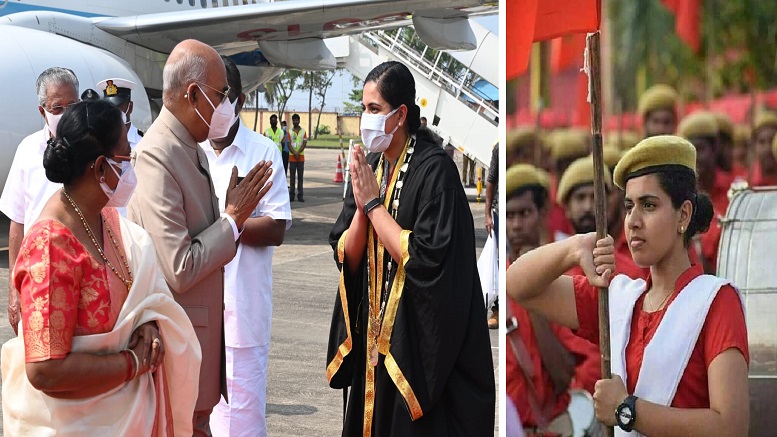 President Ram Nath Kovind’s security protocol was breached not once but twice on the same day at Thiruvananthapuram. The whole visit was marred by administrative errors. The town’s mayor barged into his convoy, and there was no running water where the President was put up.

The initial protocol breach occurred when the mayor’s official vehicle infiltrated the president’s official convoy while it was on the move.

The first citizen was on his way to unveil the statue of late P.N. Panicker at Poojappura, some 10 km away. His cavalcade had 14 vehicles including his security personnel, ambulances, and fire and rescue vehicles.

As per standard operating procedures, vehicles that accompany the president are pre-approved by his security apparatus and then scanned before the actual journey. Once the President’s convoy leaves, it stops for none nor does it pick up any other vehicle in between, no matter how big the VIP. The whole pre-planned route is barricaded in advance.

Had the rest of the vehicles behind her not hit their brakes in time, Arya Rajendran’s vehicle would have resulted in a major accident. For security reasons, the standard operating procedure for such convoys on open roads is usually the maximum speed limit, or slightly higher.

These are dangerous times in crime-infested Kerala and Rajendran’s misdeeds might have given enemy agents better insight into our security protocols. It is not known as to why the president’s own supposedly heavy security detail did not handle the situation more aptly. Some media reports even implied that this breach was executed on purpose.

Rajendran maintained that no protocols were breached but later changed her statement. She modified it following reports of intelligence assessments that this was indeed a major security breach.

The mayor said that she did not know that barging into the president’s convoy was a violation, but does she know that ignorance of the law is not an excuse in any country. It might well be the case in repressive banana republics like North Korea and Cuba.

An adjoining room at the venue was allocated for the President of Bharat to freshen up but there was no water in the restroom toilet. The president was made to wait outside the washroom for several minutes.  Even then water had to be brought in buckets from outside, to use the toilet. This was the second breach of protocols.

Local communist managers tried their best to soft-pedal the issue but central intelligence agencies have launched an investigation into the incident.

Unperturbed by the commotion around him, the President attended the functions with grace.  Panikkar built many libraries since he wanted to remove the evil of illiteracy and wanted to make literacy a people’s movement, he said.

Comrade Arya Rajendran whose political experience revolved around shouting communist slogans for the Students Federation of India (SFI), ie. the student’s wing of the Communist Party Marxist (CPM). That she is an ardent fan of Chief Minister Pinarayi Vijayan, helped her political career.

She won from the Mudavanmughal ward of the city corporation, bagging 2,872 votes, just 549 more than her rival. She was appointed the Mayor around this same time, last year.

It was apparent that she was just another immature dummy comrade for the communists to engage in their corrupt practices. Even as she indulged in corruption and has been caught on multiple occasions, she invokes those 549 voters and democracy.

In the 100-member corporation council, the ruling Left Democratic Front has 52 councilors and the opposition BJP has 35.

Mayor of the corrupt

Within 2 months of becoming the Mayor, gross misappropriation of funds in the name of Attukkal Pongala is the first allegation of corruption against Rajendran. She along with her cronies looted lakhs in the name of deploying rented trucks for waste disposal and other expenses.

Tender documents showed that 21 tipper trucks were ‘used’ to clean the city after the Pongala celebrations at a cost of Rs 3,57,800. Corrupt officials brazenly even tried to get their bills passed from the public exchequer for parottas and chicken worth Rs 35,500, 95 kilos of bananas and 50 cases of drinking water. Alert BJP councilors opposed the move.

Incidentally, the Attukal Pongala was not conducted in public streets or near temple premises this time around citing covid protocols. Pongala offerings were made in homes. Later, Rajendran said that the trucks were used to remove garbage from other spots around the city!

In April, when the whole country was reeling under the Covid-19 epidemic Rajendran went ahead and closed the drug bank meant for the poor near Thiruvananthapuram medical college. At the same time, the dead bodies of corona patients were being cremated not separately but in groups.

She courted controversy when she said that a gas crematorium has been completed on war-footing and even posted photos of her attending its trial run on social media. When it was pointed out to her that it was inappropriate for a responsible representative to say so during a time of the pandemic, she withdrew the posts.

It was only recently that Rajendran even admitted that lakhs of tax evasion took place in Corporation offices under her watch. Corrupt CPM-affiliated officials collected property taxes in cash directly from residents and swindled common citizens without depositing tax collections into banks. As per law, such amounts should be deposited in the bank account before 12 noon on the next working day.

The thefts were first discovered during a local fund audit. Corporation employees committed an irregularity of Rs 33.54 lakh without paying the money in the bank. City dwellers who retained the receipts of payment might escape repayments and fines but no decision has been made in the case of those who did not preserve them. Four officers are currently in jail, and seven have been suspended.