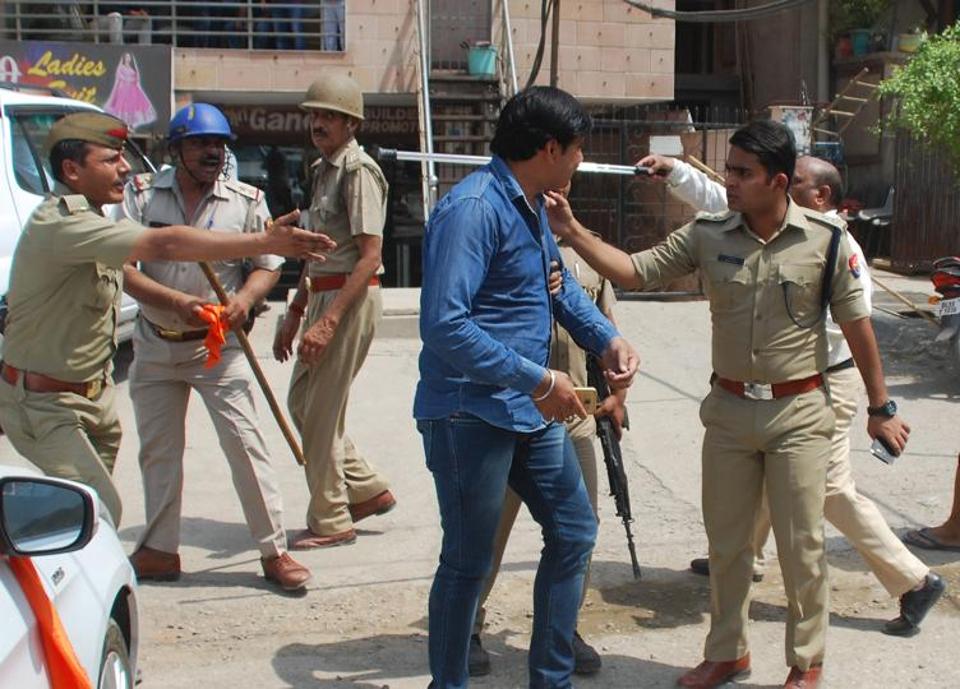 Hindu Raksha Dal took out an authorized Shobha Yatra to celebrate Hanuman Jayanti in 40 villages of Ghaziabad district on 14th of April. The event was a success and they decided to take out another Shobha Yatra on 16th through a different area, Sikandarpur, Ghaziabad district on 16th April. However, they did not have permission for this and the police did not allow them to take out the procession. Sources say that the Hindu Raksha Dal head and volunteers requested the police many times to let it happen since the earlier procession had gone off peacefully, but police flatly refused. The organizers relented and left the venue for their office.

As their head, Bhupinder (Pinki) Chaudhary went to office, many karyakartas (volunteers) collected outside the office to know what had really happened. As per eye witnesses, the police did not take kindly to people assembling there and started a lathicharge without any warning. Some volunteers objected to this and resisted the police assault. Police also damaged the parked vehicles belonging to Hindu Raksha Dal members. Then they arrested Hindu Raksha Dal head, Bhupinder Chaudhary and 20 of his volunteers while thrashing them. Police took all 21 away with them without mentioning the thana (police station) to which they were taking them. The relatives of the arrested people could not locate them for hours. Many present there are saying that this was done on the orders of Ghaziabad SP city, Salman Taj Patil (IPS).

In the meanwhile, most of the calls to mobiles of those arrested were also unanswered. Finally, one of the volunteers who was arrested, Sanket Katara, could be reached on his mobile. The call was picked up but nobody spoke, but in the background what could be heard was severe thrashing of Hindu Raksha Dal volunteers while somebody, apparently from the police, can also be heard abusing and threatening.

Finally, the arrested were produced in front of a magistrate on the night of 16th and shifted to jail. That’s when the people / relatives came to know about their whereabouts. Bhupinder Chaudhary and some other arrested have also been charged under almost a dozen sections of IPC, some of which are non-bailable and very serious : sec 147 (rioting), 148 (rioting armed with deadly weapon), 149 (unlawful assembly), 188 (disobedience to order of a public servant), 186 (obstructing public servant), 336 (endangering life or personal safety), 307 (attempt to murder), 332 (voluntary causing hurt), 353 ( assault or criminal force to deter public servant) and various other sections like 342, 427, 504, 506. The police has also charged them with section 7, Criminal Law Act, which is to do with ‘molesting a person to prejudice of employment or business’. The relatives of the arrested are accusing that unnecessary sections have been slapped on the orders of Ghaziabad SP city, Salman Taj Patil. 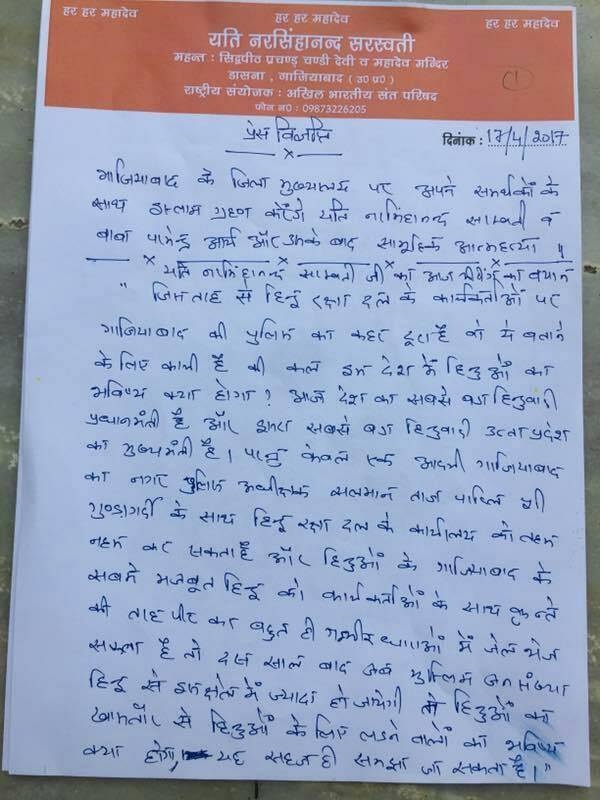 Mahant ji is threatening conversion to Islam and then suicide, if justice is not served in this case. He is upset over the alleged police barbarity and thrashing of the 21 volunteers of Hindu Raksha Dal. It may be noted that Mahant ji has been very vocal earlier for appointment of Yogi Adityanath as CM of UP. The local Hindi media has also published this news : Incidentally, this is not the first case of locals from Ghaziabad and surrounding areas accusing Ghaziabad police and SP (City) Salman Taj Patil of biased action.

Similar protests were heard in the recent case of the rape and murder of a 5-year-old daughter of a Hindu priest by a Muslim mason (who is still absconding), in Indirapuram area of Ghaziabad. As per this Times of India report –

“The family members of the girl, along with over 200 more villagers, demand the arrest of the accused and raised accusations against Ghaziabad police of concealing the girl’s body after its recovery and not handing it over to the family members for its last rites, rather performing them in anonymity. Speaking to TOI, the girl’s father said, ” They did not let us bring the body home and the SP (Salman Taj Patil) tried hiding the matter from the media persons. He said that this matter can strike communal tensions, and hence this action is necessary.”

The allegation of police brutality against Hindu Raksha Dal members needs to be thoroughly investigated. The following points need to be answered –

1.) What was the police justification for refusing permission to the Hanuman shobha yatra on 16th, seeing that a much larger procession on 14th had gone off peacefully? When police uses kid gloves to handle any issue related to Muslim dominated areas, even failing to implement court orders against illegal mosque loudspeakers or Friday namaz being offered on public roads, such selectively uncompromising action against Hindu groups raises eyebrows. Mumbai police even refused to act against Reza Academy hooligans who burnt police trucks and molested policewomen in Azad Maidan in 2012. In this case, there was no threat to law & order – so did police try to deal with the situation amicably, or did they provoke further confrontation?

2.) After the crowd had dispersed and went back to the Hindu Raksha Dal office, what was the justification to lathicharge and disperse those assembled? Only Section 144 of the CrPC (a colonial era law) empowers a magistrate to prohibit an assembly of more than four people in an area. Do citizens now have to take permission from authorities to hold private meetings in their own premises?

3.) The audio recording of the alleged police beating is highly distressing. UP CM Yogi Adityanath should take note and order a high-level enquiry –  strict action is needed against police officials found guilty. UP police has a very poor reputation when it comes to treatment of prisoners – 21 year old Ravin Sisodia, one of the accused in Dadri Akhlaq’s murder case, also died in mysterious circumstances while in police custody.

The work to repair the politicization and dereliction of UP police under the ‘secular’ Samajwadi rule, due to influence of Muslim-Yadav votebank politics, should start on a war footing.