As Kerala is suffering from its worst floods in over 100 years and people in the state are fighting for survival and life, the opportunists of the #BreakingIndia brigade have started playing their ugly game even in this hour of calamity.

An organized social media campaign is underway to create an impression that the centre and BJP-ruled states have done nothing to help Kerala, and that sending the Army is not a help but obligation as the Army is funded by our taxes. Moreover, certain elements are systematically posting filth highlighting the North-South divide and mocking the ‘cowbelt’.

The truth is that people from all walks of life are trying their best to help the state in distress. State governments have opened up their funds to donate for Kerala relief. Even a small state like Arunachal Pradesh has donated 3 crore, and states like Uttarakhand and Bihar which themselves suffer from natural disasters almost every year, have donated Rs 5 crores and Rs 10 crores respectively. But the arrogance & divisive agenda of the Christianist-Islamist-Communist troika from Kerala, subtly supported by our left-liberal intellectuals, is appalling.

For eg., witness this tweet claiming that only UAE and gulf countries are sending help to Kerala while our own country is doing ‘nothing’ –

Foreign governments are stepping up to help #Kerala in this tragedy. Meanwhile, India's PM is still figuring out whether his own people deserve funds that are rightfully theirs, and his party's trolls are calling Kerala a "bikhari" (beggar) state. #shame #BJP #Modi https://t.co/YBYwzuzXdQ 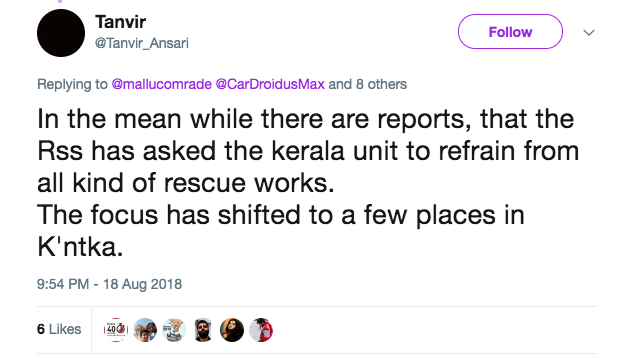 As usual, it was left to individuals on social media to counter this poisonous narrative –

Why People Support, Have Faith Feel Proud & Love @BJP4India ? it's bcoz let their be Problem in Any Part of India , they are Always ahead with helping Hands in Any Situation. See the contribution of BJP Ruled states & #NDA in #KeralaFloodRelief One Always can say #BJPwithKerala pic.twitter.com/LEviI0Jzn7

people who criticises RSS ,Must see this flood relief operations in Kerala.
Done by @RSSorg karyakarta's .
This is the kind of risks these boys are taking to rescue people.Should we close our eyes to it ? @ZeeNews@republic @CNNnews18 @aajtak#KeralaFloods #BJPwithKerala pic.twitter.com/2bxcclUrf7

Some might wonder, why publicize work done by any organization providing relief during a disaster, if they are working selflessly? Well, no organization in history of modern Bharat has been as relentlessly vilified as RSS – and RSS/Hindu-haters still control the narrative in this country. Hundreds of RSS workers have been murdered in cold blood in Kerala, and not one public intellectual has spoken up. That is why the true nature of RSS work and the nation-building spirit they imbue in their volunteers needs to be constantly reiterated.

It is normal human nature to welcome helping hands and noble gestures from all directions at a time of distress, but the priority of the Chrislamist-Communist lobby and their left-liberal apologists is to discredit the central government, RSS and Hindus. Their blind hatred is coming out strongly even in this calamity.

However, they are not questioning this Kerala Minister for whom a conference in Germany takes precedence over flood relief (read this report on news18.com ) or Christians of a flood affected region in Kerala objecting to accommodate Dalit families in relief camp (read this report in The Times of India).  Or the most famous MP from Kerala, who thought it more important to visit Geneva to attend Kofi Annan’s funeral rather than help with relief efforts in his home state. And there is more evidence emerging on the Kerala government’s mismanagement exacerbating the damage.

RSS, like always, during any crisis, is one of the first social organisations that comes forward to help at the ground level. Their volunteers help the needy irrespective of caste, religion or political ideology. It is well known how RSS workers have been brutally killed in Kerala in past. Despite that, RSS workers can be seen all around helping people, rescuing them, providing food and other amenities.

Agree. From my extensive years as a field reporter often covering disasters, I can say that I never found @RSSorg volunteers discriminating when it came to serving relief or medical aid; and I have seen this multiple times from the tsunami to earthquakes to floods. https://t.co/SH9z2sdVzv

Sevabharathi volunteers has been working on ground all over Kerala. Don't spread rumours.
Today few comrades rejected the food packets sent by Sevabharathi to relief camps.
What kind of bigots behave like that during a disaster? https://t.co/raDsHJWIVo

Even local temples have come forward to help those in distress:

The animosity towards RSS is not new, but the hatred for the Army or anything to do with Bharat is also becoming visible now.

A commie see political opportunism even in a natural calamity. No data is shown to prove that food and amenities sent by a foriegn country is "More" than what Govt of India does in an Indian state.
Cheap propagandists in action while people are dying back home. #KeralaFloods https://t.co/hwcLaVVTmC

There are many tweets claiming that help and rescue operation run by the armed forces is actually an obligation for the Center as they (Dakshin Bharatiya states), pay a lot of tax to the center: 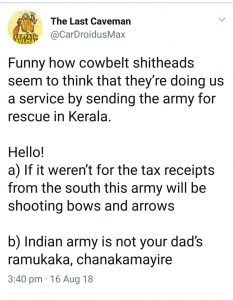 What kind of a mindset feels that accepting help from one’s own Army is degrading? Has the Army asked that people of Kerala thank it for doing its job? NO. But isn’t it normal to feel a sense of gratitude for a jawan who risks all just to rescue people & provide succour? How different is this sick attitude from those who dismiss jawan’s dying on the border or in anti-Naxal operations, by saying ‘this is what they are paid for’?

And it’s not just low-level propagandists spreading the anti-Army narrative, but even sophisticated so-called ‘centrists/neutrals’ –

For starters, Army HAS TO bill. Basic bookkeeping coz, it is not a revenue generator. States need not pay. GoI does. For decades now.

No, it is not the tweet that bothers me, as I've stopped entertaining idiots with zero logic. But, that much number of RTs & Likes? pic.twitter.com/3A4NYAeoc7

The hatred for those who consider the cow as sacred and who support the Army is no longer veiled – the hate is now out in the open. Here are some tweets which capture the the efforts of Army, navy and airforce during these flood relief operations:

Please don’t mind me posting a lot of these videos. These are unnamed soldiers, sailors and airmen who you likely will never hear about or see again once operations end. Doing their job. Bravely, quietly. May they have a chance to rest soon too. #KeralaSOS pic.twitter.com/pfvckDnZti

The fraud intellectuals and social justice warriors today stand exposed – those who talk about redistribution of wealth and advocate minoritarian schemes, are now stoking the fires of separatism and regionalism, as this article explains.

Such is the hate campaign that nationalists have been forced to present the true picture of how ‘secular’ politicians have responded when such calamities struck the much-despised ‘cowbelt’ states.

It is not that a part of the country is experiencing floods and destruction due to excessive rains for the first time. Many states like Uttarakhand, Bihar, Assam and other NE states face nature’s wrath almost every year. Rescue operations are run by the army, other states may or may not send any help, but never have we seen such widespread hatred towards fellow countrymen, army and other states by those who suffer in these states. People might criticize and question their state government’s efforts, but one thing is certain – they appreciate the efforts of the Army and volunteers who save their lives.

But why is this not the case with Kerala or Kashmir? The answer lies in the the fact that the politically driven, #BreakingIndia, anti-Hindu forces which dominate in these states have stooped so low that their only agenda is to mock and criticize Hindus, the idea of a united Bharat and anything associated with it.

Abrahamics (and Communism is a strain of Abrahamism)  have a supremacist belief that they are the enlightened ones and morally & intellectually superior to everyone else in Bharat. Humility automatically comes in the hour of crisis when one is at the mercy of nature, but it doesn’t seem to be a case with these #BreakingIndia forces. For them, their agenda of keeping Hindus divided so as to perpetuate their influence runs supreme at any given point of time.

Bharat, as a country, has always stood together in the hour of crisis, be it a war or nature’s wrath. And this time also, the country stands for Kerala and fellow citizens helping them, praying for them.