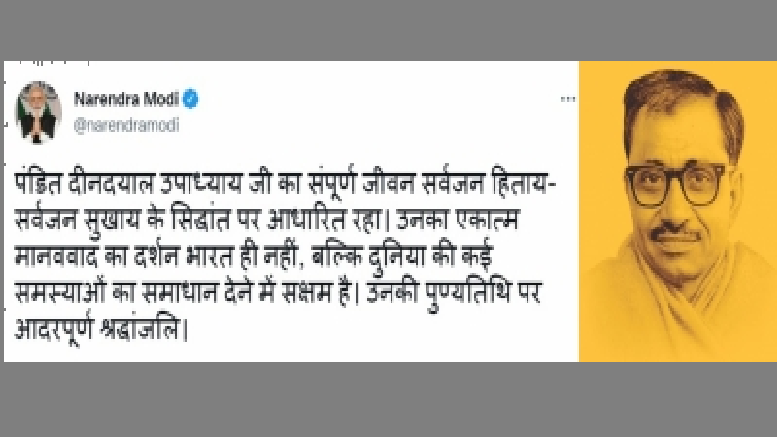 Taking to Twitter, the Prime Minister: “The entire life of Pandit Deendayal Upadhyay ji was based on the principle of ‘Sarvajan Hitay – Sarvajan Sukhay’. His philosophy of ‘Integral Humanism’ is capable of providing solutions to many problems of not only Bharat but the world. Respectful tributes on his death anniversary.”

“His philosophies of ‘Integral Humanism’ and ‘Antyodaya’ have inspired many to serve the nation and the downtrodden and will continue to remain a guiding force for all.”

Also in a tweet, Home Minister Amit Shah said: “Deendayal ji’s philosophy of Antyodaya and Integral Humanism contains solutions to the problems of India and the whole world. By giving house, electricity, gas, toilet and pure drinking water to every poor and downtrodden, Prime Minister Shri @narendramodi ji is doing a great job of bringing Deendayal ji’s ideas to the ground.”

Meanwhile, Defence Minister Rajnath Singh tweeted: “Heartfelt tributes to Pandit Deendayal Upadhyay ji on his death anniversary. He has given such a philosophical concept of ‘Integral Humanism’ to the politics of India, which is completely in line with the culture, tradition and nature of this country. His thoughts will continue to inspire the coming generations of India.”

BJP chief J.P. Nadda said that “his entire life dedicated to the service of the nation is an inspiration for all of us”.