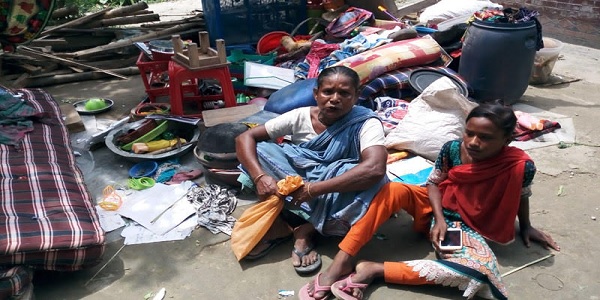 Hindus in Bangladesh are one of the most persecuted communities in the world. Muslims of Bangladesh often rebuke Hindus as Malaun. The word Malaun is derived from the Arabic “ملعون”, meaning ‘accursed’ or ‘deprived of God’s Mercy’, and in modern times, it is used as an ethnic slur by the Muslims in Bengal for Hindus. Political leaders from religious parties frequently abuse the Hindus as Malauns during the election rallies (Source: Wikipedia). However, since January 2018, we have been tracking the various cases of Hindu human rights violations in Bangladesh –

We have followed different media reports to collate these crimes. Here is the report on human rights violations against Hindus of Bangladesh reported in the month of August’18:

2. Again a massive theft has occurred for the second time in this year at a Hindu temple in Lakshmipur district of Bangladesh. Officer-in-charge (OC) of Kotwali police station, Muhammad Lokman Hossain forbade journalists to capture photographs of that post-theft incondite temple’s inside, Bengali-language national daily newspaper of Bangladesh, Kaler Kantho has reported on 3rd August, 2018.

4. Jewelery shop of a Hindu man has been looted in Gaibandha district of northern Bangladesh. The gang entered shop & beat up Hindu owner & threatened to kill him. The gang had been demanding toll from the Hindu owner for the last few months, English-language national daily newspaper of Bangladesh, The Daily Star has reported on 8th August, 2018.

5. Bangladesh Hindu Kalyan (welfare) Trust has demanded the government to establish a foundation for the welfare and development of the country’s Hindu community, news agency United News of Bangladesh (UNB) has reported on 8th August, 2018.

11. Police has not recorded rape attempt case against Muslim youth Samrat lodged by victim, a Hindu housewife after 4 days of submission in Rajshahi District of north-western Bangladesh. Meanwhile, since submitting a case with police, accused’s family members have been threatening the Hindu family by plotting the Hindu family as drug trader, Bengali-language national daily newspaper of Bangladesh, Dainik Ittefaq has reported on 11th August, 2018.

12. Hindu housewife has been raped by local leader of current governing party, Bangladesh Awami League, Habibur Rahman in Sirajganj district of north-central Bangladesh. However, rapist Habibur Rahman has been punished as well as sacked from the party by senior Awami League leaders for his misdeed although rape case can’t be judged by arbitration according to Bangladesh law, only judicial court can, Bengali-language news-portal somoyerkonthosor.com has reported on 15th August, 2018.

15. 10th grader Hindu schoolgirl hasn’t been rescued even after 1 month into her abduction by Muslim abductor in Lalmonirhat District of northern Bangladesh. Victim’s father said, “The relatives & cohorts of abductor Abdul Khaleque are giving threat over cellphone to withdraw the case. Our daughter was very much disturbed as she was being stalked by the main culprit on way to school”, English-language national daily newspaper of Bangladesh, The Daily Star has reported on 27th August, 2018.

16. Fanatic Muslim has removed the poster of Hindu festival ‘Janmastami’ in Dhaka, Bangladesh, hinduexistence.org has reported in it’s website on 29th August, 2018.

18. “Persecution on religious minorities in Bangladesh is going on silently, few get media coverage, few do not”, said municipality mayor of Raozan Upazila (sub-units of districts), Debasish Palit, popular bilingual online news-portal of Bangladesh bdnews24.com has reported on its Bengali website on 31st August, 2018.

We will continue tracking the sorry condition of #HinduHumanRights in Bangladesh.