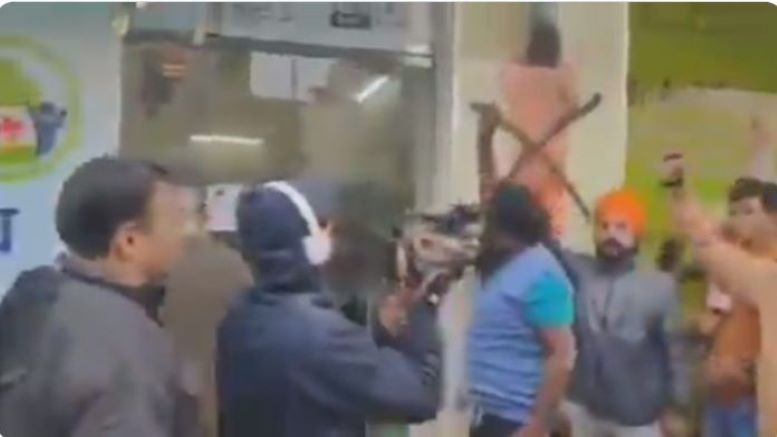 During the protest against the new farm laws, a group of ‘farmers’ vandalized a Patanjali Ayurved store in Kundli on the Delhi-Haryana border.

In a video, which has now gone viral on social media, the protestors were seen gathering outside a Patanjali store and shouting slogans calling for the store to be closed. They can be seen yelling “Bandh Karo, band karo (Close it down)”. One man was even seen tying a chain and lock around the entrance gate in order to shut down the business establishment.

Not only this but the protestors were also rasing slogans like ‘Ramdev haye haye (Down with Baba Ramdev)’, ‘Jo Bole So Nihaal’ and ‘Raj Karega se Khalsa’ (the Khalsa will rule). The poster of Baba Ramdev was blackened and a huge cross mark was put on the poster. The protestors also tried to shut down Jan Aushadhi Kendra owned by the government, which sells medicines at low rates to the poor and underprivileged people situated next to the Patanjali store.

Now what on earth does 'Kissan Ekta' gotta do with Baba Ramdas & Patanjali??
🤔 pic.twitter.com/iePo76rnqO

Despite the vandalism and forcible shutting down of the store clearly visible in the video, one of the protestors claimed that they were carrying out the protests in a peaceful manner. It beats one’s imagination as to what Baba Ramdev, Patanjali or even Reliance Jio whose towers were damaged by the protestors has to do with the farm laws. This is nothing but blackmail and vandalism in the name of protests.

This is also not the first instance of a Patanjali store being targeted by the protestors. Earlier shutters of several stores selling Patanjali products were forcibly downed in Tohana by the protesting farmers while calling for the boycott of the company’s products stating that Baba Ramdev was anti-farmer. This shows how religious extremists have clearly infiltrated the protests, a fact attested to by the AG based on IB reports during the hearing in SC.

This mindless vandalism is being promoted by farmer unions who are hand-in-glove with the opposition and are attempting to extract political advantage out of the situation.