Pari Khan aka Heer Khan and P Naveen: a contrast in approaches by Hindus and Muslims 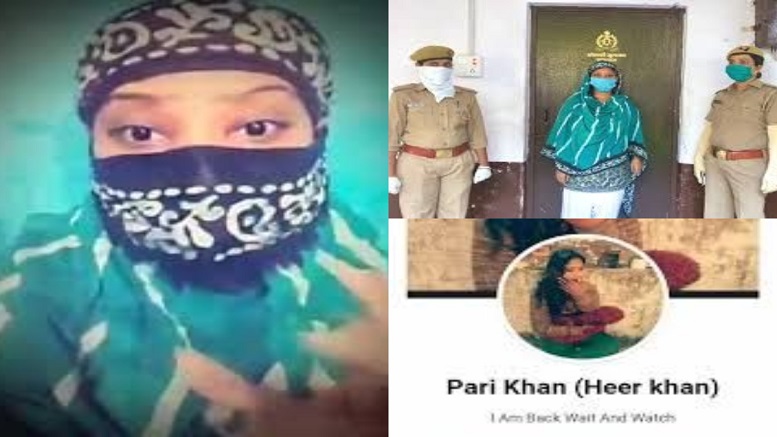 Pari Khan, who also goes by the name of Heer Khan made videos on YouTube which contained abusive remarks towards Hindu Gods. I watched just a few seconds of a video and the language was so vile that I, as a practicing Hindu, did not have the courage to watch further. In the viral video, she says that Ayodhya is a brothel and Goddess Sita is a prostitute. No doubt, the whole video has even more objectionable remarks.

She runs a YouTube channel and according to media reports, she had been making such videos, abusing Hindu Gods, since last 2 years and had threatened rape and riots to all those who oppose Muslims. She apparently supported both Jaish-e-Mohammed’s Maulana Masood Azhar and Rahul Gandhi. The titles of her video indicate that she is against CAA, NRC and other acts and events, that she claims are anti-Muslim in nature.

Quick action by UP Police

As soon as the videos went viral, there was a demand from a large section of Hindus to arrest Pari Khan. Many resourceful persons found her mobile number, city etc. from her online profiles, and reported the same to police. The UP Police launched a manhunt and soon identified her house, but she was absconding. She was finally arrested by Prayagraj Police from the house of a relative, and on the same day UP govt notified people through social media.

The response by Muslims and Hindus: a contrast

It is important to compare this case with the recent P. Naveen case of Bengaluru. The case was covered by HinduPost and involved a Facebook post of a picture with some content about Muhammad, prophet of Islam, that Muslims deemed objectionable. Although the picture quoted valid Islamic religious texts and Naveen claimed his account was hacked, that one picture was enough to rile thousands of Muslims to run riot in Bengaluru. Educated Muslims were seen campaigning on social media urging the violent mob to assemble, and many demanded public hanging of Naveen without any due process of law.

The mob went on to damage crores of property, including setting fire to house of a sitting Congress MLA, a Dalit, and dozens of policemen were injured in the clashes while two rioters died. It was after much difficulty that the situation could be brought under control. Let us see the key differences in the cases :-

Note: until recently, most Hindus have been apathetic about hate speech against them and anti-Hindu bigots got a free pass. While liberals & seculars applaud such ‘tolerance’, such apathy is condemnable and a sign of a society with zero self-respect. The change we have seen in the last few years of Hindus standing up to counter those who slander their Dharma and deities is very welcome.

From radicalised Muslims, to Christian missionaries, to neo-Ambedkarites, to stand-up comics, to liberal/Marxist intellectuals – hate for Hindus is real and damages the collective psyche of Hindu society when it goes unchallenged. New Hindu groups acting as community watchdogs and legal activists are adopting the right approach in tackling the menace of Hinduphobia. Now, it is up to the state to act swiftly and firmly against the anti-Hindu bigots to ensure the Hindu trust in the legal process is repaid.

This case serves as a warning to Hindus of Bharat. Islamism has spread its vile tentacles deep within the Muslim community. Radicalisation over the internet has turned many of them into hate filled zombies, who are ripe for recruitment by anti-national forces. Although, Pari Khan just made a video, people with such hate are potential terrorists.

It must be understood that it is precisely because of this hate against Hindus among radicalised Muslims, that CAA was necessary and a nationwide NRC is urgently needed. Every day we hear of atrocities against Hindus in Pakistan and Bangladesh. This should be highlighted by mainstream media, something it has failed miserably to do thus far.

The source of Heer Khan’s hate should be investigated and then closed for access. It may be some online video channel, some Maulvi giving sermon from a mosque or some other group of radicals. Heer Khan should face trial and be given exemplary punishment so that none other can dare to publicly abuse Hindu Dharma again.