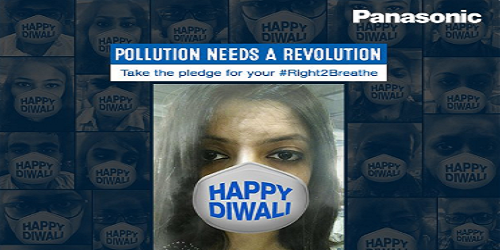 Panasonic India is facing a backlash on social media after becoming the latest corporate to dampen Diwali spirits. Like Honeywell, Panasonic too was trying to peddle its Air Purifier by relating the Hindu festival of lights and happiness with air pollution.

Panasonic started a ‘Right2Breathe’ campaign which shows a woman wearing a face mask with the words ‘Happy Diwali’ emblazoned across. 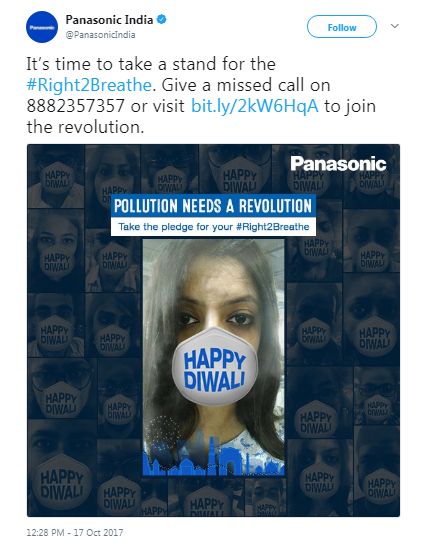 Reactions on social media were swift. It appears this ill-advised campaign might have the opposite effect to what the company had planned –

I was going to buy a Panasonic smartphone. Will not buy now. https://t.co/4sQpkBvudh

Product I am not going to purchase in future of any brand which are associated with @PanasonicIndia @panasonic @Panasonic_mob unless they prove me that their own products 100% recycle and does not contain any hazardous materials which harmful to mother nature. #Don‘tpreach

My family wanted Panasonic LED TV as Diwali gift. We would now bycot all Panasoinc products & also campaign against you for being anti-Hindu

Same here. Someone suggested I check out their smart TVs. Now that is no more an option as fast as I’m concerned.@PanasonicIndia

Thinking of canceling my order for panasonic eluga

I’ll never BUY @panasonic ever again.
What abt #RightToFreedom & #RightToReligion to celebrate #MyDiwaliMyWay.
E-waste cause Pollution too.

Same here,I had actually planned to go to the store today for LED tv, y’day only finalised the model and negotiated price,but not buying now

Was just about to order home theater from @PanasonicIndia well better go from other non anti Hindu brand now ? https://t.co/THAlFvVvHg

Dunno about others but I am not buying anything from @PanasonicIndia ever againhttps://t.co/d1jXx7jQyH

With such graphics they support use of fireworks on New Year but become all preachy about air pollution only on Diwali. pic.twitter.com/KvxQSXWqkg

I would dearly LOVE to see @PanasonicUSA take a similar stand during 4th if July. @panasonic . Want to take up the challenge, cowards?

Moreover, Tata group seems to have taken a special pledge to spread the ‘Diwali = pollution’ meme. After Tata-AIA insurance, it was the turn of Tata Power to come out with an outrageous tweet (now deleted) claiming that one Diwali night causes as much damage to the ecology as regular pollution does over the span of a year . Will Ratan Tata’s company share the study or research using which this startling claim was arrived at?

Clearly, common sense has been thrown out of the window in this free for all to denigrate the most important festival for Hindus. But then this was always coming – after what has been happening to Dahi Handi, Jallikattu, Ganesh Visarjan etc over the years. Time for Hindus to wake up and take control of their lives.