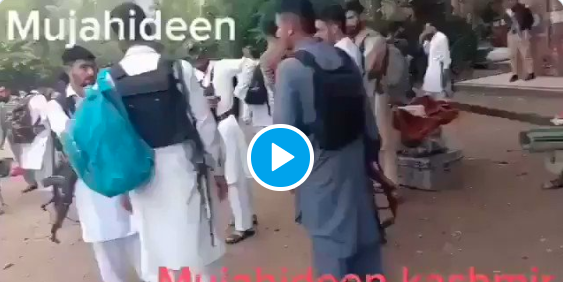 The following video (source @iaadiraj) appears to show a large collection of young men in Pakistan, most of whom are carrying automatic rifles gathered at some transit point.

The maker of the video says something (seems to be Pashto, but I am not sure) but one can hear clearly the words ‘Mujahideen Kashmir Jihad karawan’.

It is not clear whether these are military regulars in civilian clothing (a la operation Gibraltar in 1965) or private citizens who have gathered for Jihad.  Either way, they are heavily armed, and in good numbers.

Perhaps this is what our military GoC Northern Command Lt. Gen. Ranbir Singh was saying just yesterday: that 500 terrorists are poised to infiltrate into the Kashmir valley and create mayhem there.

Seeing this, a few thoughts did come to my mind:

1.) All these men are from parts of Pakistan presumably. They are all collected there, perhaps with their own purchased weapons, to try and fight Jihad against Bharat. For whom? For the supposedly oppressed Kashmiri Muslims, who are 99% of the population of the Valley. Mind you, not a single Kashmiri has died at the hands of Bharatiya security forces since August 5.

Now, compare to West Bengal.  There, on Dussehra day alone, no less than 8 Hindus were killed. 4 were of a single family—that of Bandhu Prakash Pal. He, along with his pregnant wife and 6-year-old son were slaughtered.

Do you see any Hindus gathered at transit locations hoping to go and protect their fellow Hindus in Murshidabad where Hindus have become a minority thanks to relentless infiltration from Bangladesh?

One would think that Hindus’ protective instincts would have been aroused by the fate of Murshidabad Hindus, but apart from a few social media handles, there is not even collective outrage.

Grudgingly, I say that these Muslim men are showing more “biradari” than we Hindus do, and that is our falling.

2.) These armed men again: do you know what stops their bullets from killing us? Two words: Indian Army. Had it not been for the Indian Army, these terrorists would have swooped down on innocent Hindus and killed and killed, for joy and for their religion.  It is the Indian Army that stops them. The next time you see a Jawan or an Army van, make sure you salute them.