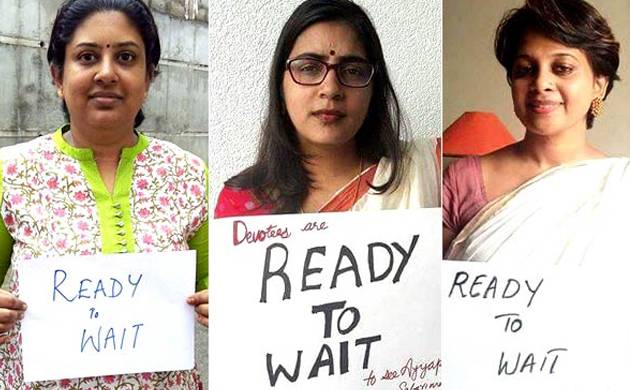 While Sabarimala temple has been celeberating Makaravilakku, rumours of Trupti Desai, heading to the temple in disguise are also going around. Campaigners of #ReadyToWait who stands for preserving the traditions and dignity of the temple, published an open letter in their Facebook page. The letter is as given below:

Reports say that you are in Kerala today, on the auspicious occasion of Makar Sankranti. Greetings! What prompted us to write to you today is the second part of that news report, which said you would attempt to “enter” Shabarimala, if needed, in disguise.

We are women who are associated with the campaign called #ReadyToWait, who stood up to speak against the utterly degrading conversations and labelling that intended to defame our beloved deity, Swami Ayyappan. Even while rejecting the claims of inequality and misogyny raised against the sanctum by teams including yours, we always have maintained decorum and accorded utmost respect to you and others. That was out of the belief that you are genuinely interested in women’s welfare and are fighting a battle which you think is righteous. But, your attempting to enter Shabarimala, especially using subversive tactics like disguise, have dented our respect for you.

You claim to fight to ensure constitutional rights to women, but your un-constitutional actions trying to force your way into a temple, whose entry is restricted by a constitutional body speak the opposite. Your actions smack of pure publicity mongering and intention to create mischief and anarchy for personal gains. These have led us to suspect your very intentions, in this campaign.

That led us to think. You, Ms.Desai, contested on a Congress ticket for elections. Your organization is almost 10 years old. You are from Maharashtra. In this tenure, what are the activities that you have undertaken to liberate, help or encourage women? Are your activities only focused on temples and places of worship and are you only interested in subjects that can give you easy publicity?

The red-light streets in Mumbai are within your immediate eyescope. Lakhs of women and children, literally live a sub human existence there. They don’t have access to any fundamental rights, leave alone the right to worship at will. They have no govt. benefits and are used and abused physically and mentally, on a day to day basis. They are trafficked and sold like mere goods and many have guards on their doors, preventing them from even stepping out. When you embarked on this journey to enable women to worship according to their whims and fancies, were you not aware of the plight of these lakhs who are denied even their basic wishes?

You say you are willing to take huge risks to your life and limb, and are facing threats while running the ‘Right to pray’ campaign. So, it is natural for us to assume that you refuse to help the women prostitutes and their children, not out of fear from their goondas, but out of sheer lack of interest. Or is it because unlike religious places where you can get easy publicity, the political risks are much higher in the red-light areas? Or are you not confident that the same chief minister who helped you in Shani Shingnapur, will not assist you to liberate the red-light street?

The fact that you choose to ignore lakhs of suffering women living a miserable life in your home state and travel to the remotest regions in Kerala just to enforce pseudo equality in one lone temple, speaks of your hypocrisy and nefarious intentions. Your campaign for entry into Shabarimala will not lead an average Indian woman’s life forward even by an inch. Their material life is not impacted by this issue. Education, finances, job parity, wage parity, health facilities and welfare are what an average Indian woman lacks equality in. And you have no interest in any of these topics.

The Ready To Wait team does not claim to be any brigade or movement. We are a part of the millions of Indian women who believe that such symbolic struggles are just tools used by people with political ambition, to gain mileage. We, the women of Kerala, boast of the best rates of education, wages and employment, no thanks to any such jingoistic NGO, but due to the social revolutions led by our saints and leaders of yore. They, unlike you, chose to focus on the right issues.

There is no gender inequality in Shabarimala. It is a shrine that embodies the beautiful spirit of a spiritual journey that entire families partake. Mere darshan is not what defines Shabarimala, it is a total of great discipline and sacrifice by the entire family. Since you already are in Kerala, we urge you to meet families of Shabarimala pilgrims and women of South India, who are as much a part of the pilgrimage as their men. May Swami Ayyappan bless you with renewed focus on real issues and the ability to see the sociological benefits of Sabarimala pilgrimage and how it betters the material life of lakhs of women.

The Sabarimala issue is actually in front of the Supreme Court, where the Ready To Wait campaigners under the banner ‘People for Dharma’ has also impleaded in the case. The matter to be noted here is that while the liberals and civil society are asking for the arrest of people who are conducting or participating in Jallikattu against the ban imposed by the Supreme Court, the same sect of people are trying to break an order passed by the Kerala High Court in 1991 banning the entry of women aged between 10 and 50 years, exposing their hypocrisy. Next hearing of the case is on 20th February disregarding which Desai is reportedly trying to gate crash into the Hill shrine.