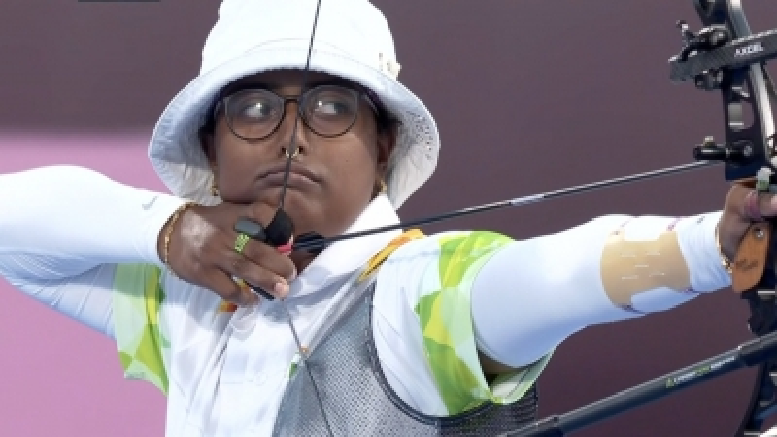 Deepika Kumari, Bharat’s lone contender in women’s archery, kept alive her hopes of a medal in the Tokyo Olympic Games by reaching the quarterfinals in women’s individual event on Friday.

Deepika defeated Ksenia Perova of the Russian Olympic Committee 6-5 in a one-arrow shoot-off after both the archers had tied 5-5 on set points in their Round of 16 clash at the Yumenoshima Park Archery Field.

Deepika shot a 10 off her shoot-off arrow while Ksenia managed only seven.

In the first duel of the day played in overcast conditions, both archers struggled for consistency. In 15 arrows, Deepika could manage only four 10s while Ksenia shot only two. In contrast, An San, the World No 1 whom Deepika will meet in the last-eight encounter, shot nine 10s in her 6-4 win against Japan’s Ren Hayakawa.

Deepika, who is participating in her third Olympics, shot a nine and10 off her first two arrows and followed it up with another nine in the first set while she shot a seven after two 9s to lose 28-25.

However, a seven by Deepika, the 27-year-old from Ranchi, after a 10 and nine helped Ksenia win the second set as she managed a 10 on her final arrow to win the set 27-26.

Deepika again took the lead as she was 28 (10, 9, 9) in the third set while Ksenia shot three 9s for 27. The two archers shot identical three 9s in the fourth set as Deepika went into the fifth set leading 5-3.

However, a poor seven on the first arrow and eight on the third in the fifth set meant Deepika could manage only 25 points while Ksenia shot a steady 28 (9, 19, 9) to level set scores at 5-5.

But Ksenia undid her good work in the fifth set by scoring seven in the shoot-off and Deepika topped her by shooting a perfect 10 to qualify for the quarterfinals and a match against world No. 1 An San of South Korea.