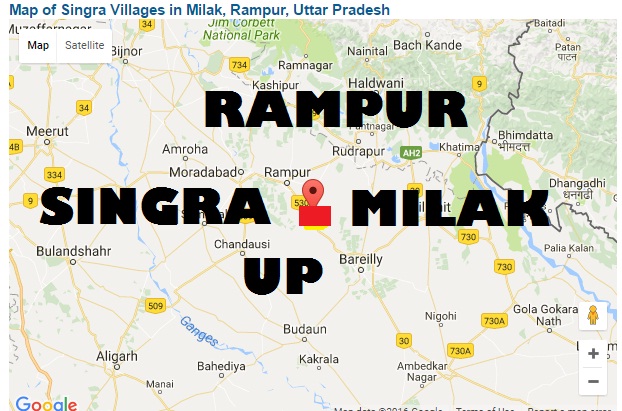 The interiors of western UP seem to be struggling with communal law & order issues. The news/incidents of interiors in Uttar Pradesh don’t seem to get reported in English mainstream media. Earlier it was Deoria district in UP that was burning with violence against poor Hindu families, this month saw protests in Milak Tehsil of Rampur district against laxity of local police regarding assault on an OBC family of Bhurji caste in 3rd week of October by some Muslims of the village.

It seems that the attackers entered this family’s house in village Singra during the night with the aim to abduct the family’s elder (minor) daughter, and when she shouted for help, the family woke up and tried to rescue her. It was then that the father and younger sister of the girl were attacked brutally by about half a dozen attackers, who were successful in abducting the girl. Hindi media has covered this news and have been updating it. There has been no report in English media.

The local police was callous and slow in trying to find the abducted girl. That’s when the villagers accused the police of going slow because the perpetrators were all Muslim. The sister of the girl died in a few days because of serious injuries while the father is struggling to survive. After this girl died and the police did not seem serious in locating the abducting girl, the Hindu organizations and villagers started protesting. Hindu Mahasabha, Bajrang Dal got involved and instead of arresting the culprits, police filed cases on the protesters. These protests have been covered by Hindi media : It may be noted Rampur district is the constituency of Azam Khan and it is alleged that the Hindu residents of this area live in fear as local police does not take action quickly if the accused are Muslims. Our ground sources have confirmed that only after various Hindu organizations did protests, collected villagers and threatened to have a mahapanchayat on 20th November, did the police spring into action. Finally, the girl was found after more than 3 weeks and few culprits were arrested, who are now in jail. Rest of the details are awaited. Hindi media has been updating on the news : The girl who has been been found is obviously in trauma. Her younger sister has died because of the assault and father is also struggling for life. Bhurji caste comes under Backward Class and is associated with the traditional family occupation of roasting gram and paddy works.

Recently we reported how another Dalit girl was abducted in Mewat, Haryana by some Muslims and it was not reported in English media. In another news, we had recently reported how a Dalit man was attacked by pro-Pak Muslim sloganeers in north west Delhi. While the urban Bhartiya population and the young students of various universities like JNU are being fed the lie of Dalit-Muslim brotherhood, the situation on ground is quite different.

The fact is, the issue of Dalits and Backward Classes is being grossly misused by politicians and social organizations, specially the leftists. Gradually but firmly, Bharat is addressing the issues of SC/ST/OBCs, and getting over the inequalities precipitated by invasions and distortions of real culture and history.

Another Hindu activist murdered by Islamists, this time in Rajasthan