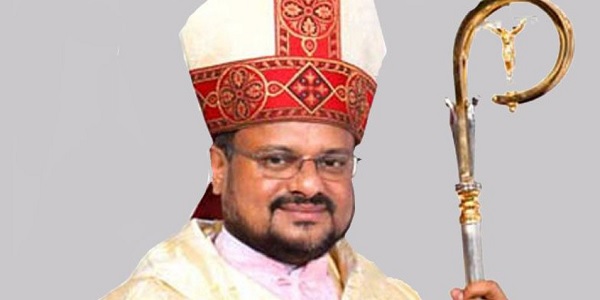 The noose of law seems to be tightening further for Latin Catholic Bishop Franco Mulakkal of the Jalandhar Diocese, accused of raping a senior Catholic nun several times, with the Kerala Police reportedly finding out that he was lying when he claimed that he was not at the place where the victim said he had abused her on the particular date she had mentioned in her complaint, reports The Pioneer.

When the police had questioned the Bishop on the night of August 13 at the diocesan headquarters in Jalandhar, Punjab he had told them that he was not present at a guest house attached to the St Francis Mission Home, the nun’s convent at Kuravilangad in Kottayam district on May 5, 2014, the place where and date on which she said he had raped her for the first time.

The police have now reportedly found that the Bishop had stayed at the convent in Kuravilangad on the particular date and not at a convent at Thodupuzha in Idukki district as he had told the police during questioning. According to the nun, the prelate had sexually abused her 13 times between 2014 and 2016 at the convent’s guest house at Kuravilangad.

The policed confirmed that the Bishop was lying about the place he was at on the particular date when they questioned the nun in charge of the Thodupuzha convent the other day. Though she was supportive of the Bishop initially during the questioning, she later admitted that he had not arrived at her convent on May 5, 2014.

This nun also told the police that she had initially given a different statement according to instructions from the Bishop. Also, there was no record for his visit on the particular date in the visitors’ diary of the Thodupuzha convent. The probe team, headed by K Subhash, Deputy Superintendent of Police, Vaikom, Kottayam, has taken this diary into custody.

Moreover, Nasser, Bishop Mulakkal’s driver, had in a statement given to the police said that he had dropped the prelate at St Francis Mission Home, the convent of the Missionaries of Jesus congregation that came under the Jalandhar diocese to which the nun belonged, at Kuravilangad on May 5, 2014.

The probe team is seriously thinking of questioning the Bishop once again in the context of the new development while rumours are still there that the police were hesitating to arrest him due to pressures from the police’s top brass and political leaders. The team would decide on the further course of action after discussions with superior officials.

Meanwhile, senior priest Fr James Aerthayil of the Carmelites of Mary Immaculate (CMI), a Syro-Malabar Catholic congregation for men, has admitted that he had tried to mediate with the rape victim on behalf of the Jalandhar Diocese in order to force her and other nuns of the Kuravilangad convent who were supporting her to drop the rape case.

As per reports, the CMI priest had told the police during a six-hour questioning late Wednesday night that he had no direct connections with Bishop Mulakkal but the prelate had contacted him through one Shobi George, a native of Kothamangalam, 44 KM east of Kochi, who is said to have close connections with the Jalandhar Diocese

He said the offer from the Jalandhar Diocese as communicated to him by Shobi George was that ten acres of land and a new convent could be provided for the victim and the nuns who supported her if they dropped their legal battle against Bishop Mulakkal. The police are expected to question the Kothamanagalam native in the coming days.

The police had booked Fr Aerthayil early last month for threatening the witnesses in the nun rape case and trying to derail the case after television news channels aired an audio clip containing a phone conversation between him and a nun supporting the victim through which he was heard making the promise on land and new convent and threatening them.

In the audio tape he was heard threatening the nuns with a question, “Don’t you know that they (Jalandhar Diocese) wouldn’t hesitate to do anything?” After the release through media of the audio clip, the CMI congregation had removed Fr Aerthayil from the charge of its St Anne’s Monastery at Kurianad in Kottayam district and transferred him to Idukki.