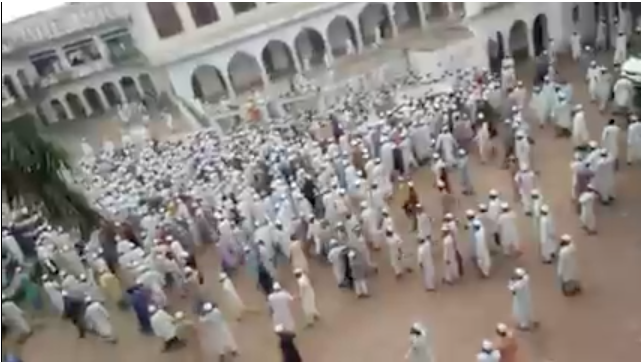 All seven were taken to New Delhi for further interrogation in order to extract information about their connections with militant groups and examine their direct or indirect link with subversive forces. Interestingly, the NIA has not so far gone public with their arrest of detention.

“The NIA is investigating a terror ring which it had cracked in December 2017 and arrested a seminary student Tauseef Malik in Kashmir. Tauseef was a third year student at the seminary and lived in its Darul Taleem hostel,” sources said.

As per reports, a NIA team reached the seminary on Wednesday evening and picked up seven Kashmiri youths undergoing Arabic education for interrogation.

Convener of the seminary, Habeeb Ahmed’s brother Maulana Mufti Nazeeb disclosed to local media persons that the NIA team reached the madarsa on Wednesday afternoon and grilled the students in a closed room for several hours.

While leaving in the evening, the NIA team took seven students hailing from Kashmir. However, the agency did not officially confirm or deny about the detention or arrest claiming that all will be released after quizzing.

Now, after Tauseef was recently arrested by NIA from Kashmir, the team again came to Banda to further examine the role of some other Kashmiri students in subversive activities.

Mufti Najeeb claimed that they along with the students extended all co-operation to the NIA team to carry out their investigation.

Jamia Arabia with 15,000 students, is one of the leading seminaries of the state and was established in 1933. Sources said that the raid caused anger among the students, who held a protest. Sources added that the NIA was developing information about some people who have studied at the seminary.

Incidentally, Wasim Rizvi,  Chairman of the Uttar Pradesh Shia Waqf Board, had recently pitched for modernisation of madrasas, saying some of them have even produced terrorists.

Bharat is home to one of the most prominent Islamic madarsas in the world – Darul Uloom, Deoband. Most Islamic terror groups which have emanated from South Asia like Taliban, LeT, SIMI etc. swear allegiance to the Deobandi school of Sunni Islam.

Last year, Yasmin M Khan, a Paris-based researcher had written an article series for Firstpost titled ‘How Deoband became shorthand for extremism and violent intolerance entered its ideology’ based on her visits to a collection of small and large madrassas in Delhi, Uttar Pradesh, Madhya Pradesh and Bihar.

Although the article romanticizes about Deoband’s “progressive role in the freedom struggle” (the truth is that Deoband supported the Congress’ freedom efforts in order to avoid splitting Muslims and to finally convert Bharat into an Islamic State) and juxtaposes Deoband’s hardline and exclusivist Islamic teaching against “syncretic Sufi Islam” (read about the Islamization of Bharat by Sufis in this 3-part series), it still makes for instructive reading on the deep radicalization of the Indian Muslim mind that such toxic madrassas have produced.

We reproduce an extract from the first article of that series-

“The Deoband brand of madrassas, which has mushroomed all over Asia and beyond, preaching an orthodox version of Islam and radicalising Muslim youth, is one of India’s most popular exports.

Recently, the Financial Times reported that the word ‘Deobandi’ (a graduate of Darul Uloom, Deoband) has become “shorthand for a Sunni Muslim extremist”. The “ubiquitous” Deobandi madrassas, described as “dens of jihadism and violence”, it said, were everywhere – estimated to run into “tens of thousands”. “Wave after wave of Deoband graduates have gone on to found their own madrassas across [the] region,” wrote the paper’s South Asia bureau chief Victor Mallet in a comprehensive survey of madrassas on the subcontinent.

…. By propagating a narrow and selective interpretation of Islam and its texts that portray women as inferior to men and non-Muslims as “kafirs”, they sow seeds of extremist thinking. They promote a harsh and intolerant version of Islam and insist that their understanding of the Quran and Sharia alone is authentic – and those who don’t accept it are not ‘true’ Muslims.

Experts in the West call it the “conveyor-belt effect” whereby madrassas initiate the process of radicalisation putting them on the path to further – and often violent – radicalisation.

A friend of mine who lives in Meerut decided to send her ten-year-old son to a madrassa during summer vacation to learn the Quran and “something about Islam”, told me she was shocked when after a few weeks the child started asking “strange questions” like why she didn’t wear burqa; and was it “haram” to watch movies and have photographs in the house? When she asked him who had told him these things he said his “maulvi saheb” at the madrassa had.

“But I was really upset when one day he asked if our Hindu maid was a ‘kafir’. I told him to stop talking such nonsense and decided that he was not going back to the madrassa,” my friend told me.”