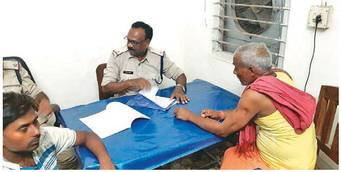 A temple in Raigarh, Chattisgarh has been vandalized by a gang of Muslim youth who took umbrage at being asked not to drink in the temple premises, Hindi daily Dainik Bhaskar has reported.

Around 4-5 Muslim youth gathered last night to drink in the temple premises in Khairpur area of Raigarh. The temple pujari and some other Hindus living nearby told them not to drink liquor at a religious place. But this infuriated the youth who called up some friends. Soon a mob of around 20 Muslim youth gathered and started abusing the pujari and others, and broke flower pots and uprooted flags planted in the temple premises.

They fled when they heard that the police has been called. Police arrested one youth around 11.30 PM yesterday, while 3 more were arrested near the railway station as they were planning to abscond.

Police are tight-lipped about the whole incident, and are neither confirming nor denying it.

(We thank @Shankhnaad for bringing this news to our attention)