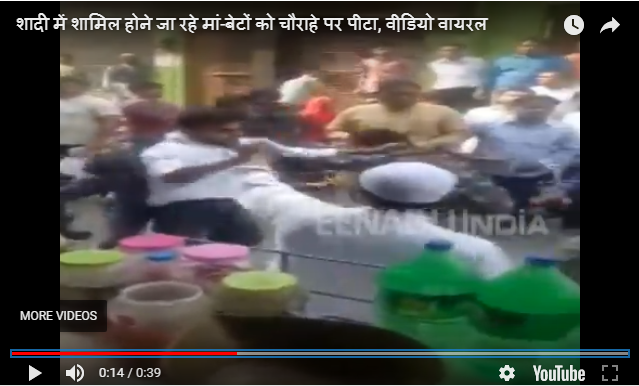 A Jain lady and her two sons going to attend a marriage were brutally assaulted by a group of Muslim youth in broad daylight at the busy Punjab National Bank (PNB) chowk in Kandhla police station area of Shamli, West UP.

A bystander shot a video of the assault –

The two brothers, Siddarth and Naman were going for a marriage along with their mother. When they reached the PNB chowk, the Muslim youth parked a bike in front of their car.

When the brothers asked for the bike to be removed, the Muslim youth started abusing them, and then dragged them out of the car and brutally assaulted them. Even their mother, who was pleading the attackers to stop, was assaulted – the horrific thrashing lasted for a full 15 minutes.

It is alleged that the police remained a mute spectator through this all. The Jain community was so terrorized that they refused to even register a police complaint. Police claims to have started looking out for the accused Muslims based on the video which went viral.

Kandhla is a stone’s throw away from Kairana which became infamous last year after the exodus of Hindu families following a prolonged spell of lawlessness during which numerous Hindu businessmen were killed, kidnapped, women molested and raped. Below is a map of where the incident took place –

Despite direct testimony on camera by those who fled and the remaining Hindu families who were contemplating to leave, our secular political class like SP & Congress, and the entire left-liberal media-intellectual-activist nexus to this day plainly deny that the Kairana exodus took place – instead they berate those who bring up the issue for ‘communalizing’ the public discourse.

The NHRC conducted a fact-finding mission which concluded that the fear and terror in the Hindu community of Kairana was real, and that there was a systematic attempt to make them leave. NHRC found that that over 250 Hindu families had indeed left Kairana due to fear of the members of a particular community (Muslims) which was in majority in the area.

What the latest assault on Dharmics in Shamli shows is that despite Yogi Adityanath’s ascent to power, a significant section of the Muslim community feel entitled to do as they please, having been fed a secular appeasement diet for many-many years.

(We thank @divya_soti for sharing this news)