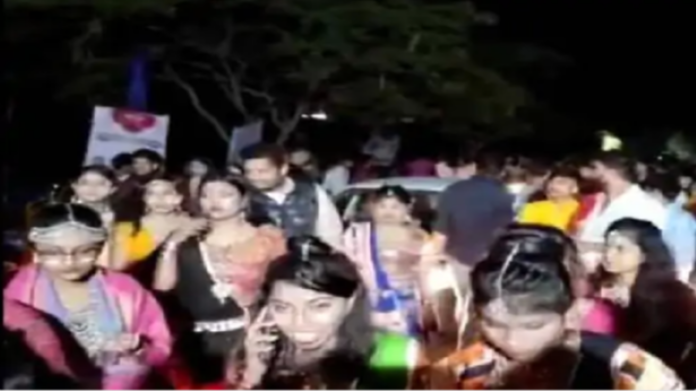 When Muslim men were admitted to a Garba event held in Indore’s Oxford College, Vishwa Hindu Parishad (VHP) and Bajrang Dal (BD) raised objections regarding the same. Hindu organizations have demanded strict action against the organizer Akshanshu Tiwari stating his actions amounted to encouraging ‘grooming jihad’. The police are said to have taken cognizance of the incident. They’ve taken five people into custody against whom action has been taken under section 188.

As per reports, Gandhi Nagar’s Oxford College director Akshanshu Tiwari had organized the event on the occasion of the Hindu festival of Navratri. The administration had been given permission for 800 attendees whereas thousands gathered for the event. It has been alleged that even Muslim men were allowed entry into the event. Further, allegations are afloat regarding the black-marketing of tickets with tickets worth INR 150 said to have been sold for as high as INR 600.

After Hindu organizations raised objections, IPC section 188 (disobedience to order duly promulgated by public servant) was invoked against Tiwari and four others. The section provides for jail or fine or both for those who knowingly violate the order passed by a public servant.

It must be mentioned here that VHP had put up posters saying “entry for non-Hindus is barred” across Durga Puja Pandals in MP’s Ratlam. VHP has clearly stated that since Hindu customs aren’t incorporated by non-Hindus, they can’t be allowed to attend Garba events.

“As you all know murti puja is a crime in Islam. If it is a crime in their religion, then why do they come to Garba events? If you look into history, Hindu temples have been demolished. So if they really love Garba and idol worship, then why not send their sisters and daughters to these programs?” questioned VHP’s Chandan Sharma.

In September, the BD had asked organizers of Garba and Dandiya events to bar entry of non-Hindus and had appealed to them to insist on AADHAR cards for entry. BD had cited that these measures were essential to ensure the safety of Hindu women.

BD Media Convener S Kailash had stated that the appeal was made to the organizers so that non-Hindus weren’t allowed inside the venue and non-Hindu bouncers were also not appointed by them. He said that non-Hindu men attend these functions only to harass and misbehave with Hindu women and not because they have affinity towards Hindu festivities.

As is their wont, MSM attempted to present this as a case of “right wing bullying” as was evident from the manner in which NDTV reported the matter. They accused BD of “targeting” Muslims.

The report also insinuated some sort of ‘protection’ being afforded to Hindu organizations from the ruling BJP state government. Such attempts by the media to vilify Hindu organizations while turning a blind eye to certain very real Hindu concerns is by no means shocking considering MSM’s overenthusiasm to portray the majority community as ‘oppressors’.

Whether or not MSM acknowledges it, concerns of Hindu women being deceived by Muslim men who take on a Hindu identity is very much real as is seen from the spate of such instances. That such incidents are on the rise across Bharat in general shouldn’t simply be brushed under the carpet.

Here is a list of such recent events where Hindu women were trapped by men assuming a fake Hindu identity:

1) February 2021 – Two Muslim men from Indore, identified as Sohail Khan and Hasan Qadir, were booked in a grooming case under MP’s new religious law (MP Dharm Swatantra Adhiniyam 2020) for allegedly hiding their real identity and forcing two teenagers to marry them and to convert into Islam. It has also come to light that when the girls refused, the men molested them.

2) March 2021 – 3 Muslim men were arrested after locals leveled allegations of grooming minor Hindu girls and assaulting locals who confronted them.

3) April 2021 – In yet another grooming jihad case, gym trainer Mustafa was booked under MP’s Freedom of Religion Act for hiding his Islamic religious identity from his Hindu wife before marriage. The pregnant woman found out his real identity when he produced his identity card at a maternity hospital where they had gone for her check up.

4) July 2021 – Afzal (24) created a fake profile on Instagram under the name ‘Golu’ to befriend a minor. Afzal aka Golu introduced himself to the minor as a businessman dealing in coolers and freezers. Trapping her in his bogus story, he persuaded the 15-year-old teenager to elope with him.

5) August 2021 – A Muslim man named Faizan was accused of posing as Kabir first befriended a 35-year-old Hindu woman running a beauty parlour in Kanadia area, Indore. The woman was then raped by Faizan at knife-point and an objectionable video was shot of her. Using the video, Faizan continued to blackmail and sexually abuse the woman.

These are only some of the instances reported from Indore, add to this numerous such incidents come to the fore from across Bharat and we would know why Hindu concerns need to be addressed and not brushed under the carpet as most naysayers do.