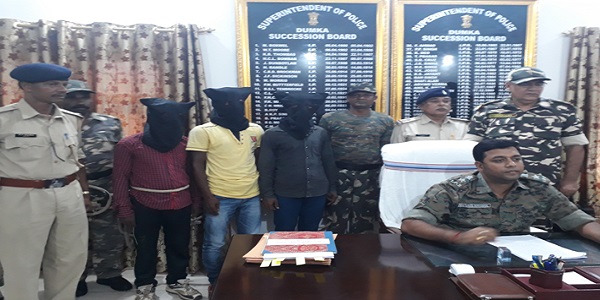 Police was successful in nabbing three named accused in the rape case of a tribal student in the naxal affected area of Kathikund of Dumka district on 2nd June. SP Kishor Kaushal confirmed the incident in the press conference organised in the residential office.

The incident took place on 30th May. SP Kaushal told that according to the FIR registered by the victim, on the day of the incident she was out with her friends to attend a marriage ceremony in the village. When she went out to relieve herself, the accused who were premeditatedly waiting for her took her into the bushes at a distance of 700 metres and raped her.

Police registered a case against the named accused and started their search. Police has sent for DNA test in the incident along with forensic test of the inner clothes of both the victim and the perpetrators. Victim is a student of degree 1.

Among the arrested accused, Muzaffar is 24 years old. The age of other two accused is said to be around 35 and 36 years. DSP Ashok Kumar Singh was leading the search operation as per the instructions of SP Kishor Kaushal.