Muslim man chews off finger of co-passenger on Mumbai local, threatens to throw him out 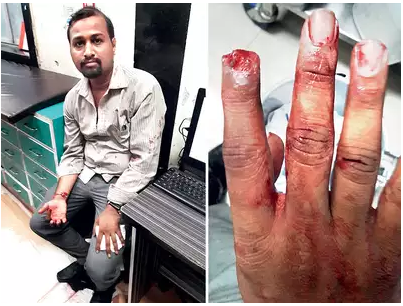 It began as the sort of verbal spat which is common on Mumbai locals, but which usually ends with both parties cooling down and getting on with the business of life in the hurly-burly of the maximum city.

But on a packed Asangaon peak-time local on Thursday evening, things took a bloody turn. When Asif Yusuf Shaikh (25) boarded the first-class compartment of the train at Kurla, he tried to forcefully make space next to Mahesh Pandurang Dhumbre (34) and two other commuters already standing next to the door.

As there was hardly any space left near the door and because Shaikh was stopping other people from getting in, Dhumbre pulled him inside the compartment. Shaikh took offence at this and pushed Dhumbre away.

Both men got into a heated argument and eyewitnesses told GRP (Government Railway Police) personnel that Shaikh used abusive language with Dhumbre and pulled his collar so hard that his shirt buttons came off. Dhumbre fought back and held him by his neck, which is when Shaikh bit his finger and held it tight between his teeth.

Speaking to Mumbai Mirror, Dhumbre recalled that the pain was so sharp that he screamed and shut his eyes tight. A few second later, when he opened his eyes all he saw was blood on Shaikh’s shirt and his mouth. “I thought I had injured him. But then I saw a dislodged part of my finger in his mouth. It was me who was bleeding profusely,” said Dhumbre, who lost one cm distal phalanx of the index finger of his right hand.

Dhumbre said he stood shocked as Shaikh continued to hurl abuses at him after spitting out the bloody piece of finger. According to the FIR registered with GRP Kurla, Shaikh threatened to throw Dhumbre out of the train but was held back by fellow commuters. One of the passengers called the railway helpline number. When the train pulled in at Thane station, two GRP personnel arrested Shaikh after a short chase.

Dhumbre underwent a corrective surgery on Friday evening and his elder brother Yogesh said, “The doctors say they are not sure if they will be able to salvage the finger completely, but will try to restore the portion for the nail to grow back.”

Shaikh has been booked under sections 325 (voluntarily causing grievous hurt) and 504 (intentionally insulting and provoking to break the public peace) of the Indian Penal Code.

In June 2017, Muslim youth Junaid Khan died after an argument over train seat sharing got heated and he called in his brother & friends to board the train and attack the other group. That incident was blown out of all proportion by media, a communal twist was given by falsely claiming that the Muslim group was ‘taunted for beef eating’ and Junaid Khan’s brothers & friends’ statements were taken at face value and they were projected as innocents at the mercy of ‘hateful, violent Hindus’.

But the attack on Mahesh Dhumbre will not make it beyond the Mumbai tabloids and inside pages of mainstream papers. No one will care to investigate what motivated Asif Yusuf Shaikh into such a rage that he bit off another man’s finger. No one will try to analyze why such a skewed proportion (relative to their population) of cases involving violence over trivial matters, or murderous attacks on police, involve Muslim perpetrators.