Muslim girl, 18, tied to tree and whipped for trying to elope with Hindu boy – Bihar 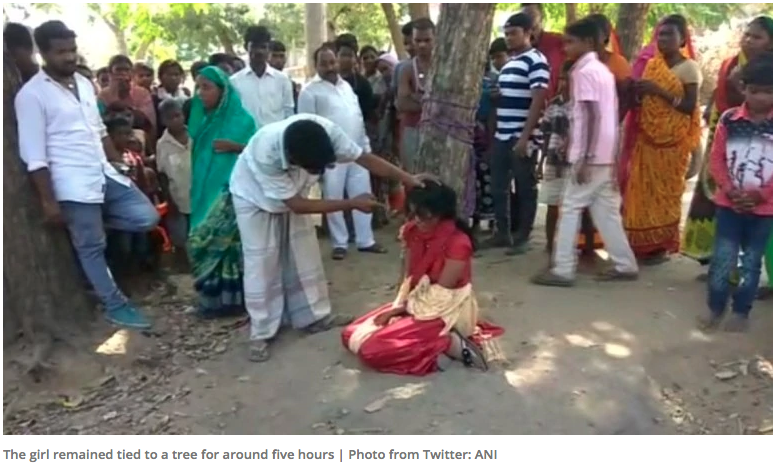 An 18-year-old Muslim girl in Nawada district, Bihar was tied to a tree and caned by her family members for loving a Hindu boy. Her punishment was allegedly a result of the village panchayat’s diktat.

The incident happened on Wednesday (October 3) in Jogiya Maran village falling under Rajauli police station in Nawada. The girl remained tied to the tree for around five hours.

When she was being thrashed, no one came to her rescue.

The 18-year-old girl, daughter of Mohammad Farid Ansari, fell in love with Rupesh Kumar who hails from a neighbouring village. Both of them wanted to marry but the girl’s family was against the union.

On September 30, the girl fled form her village to stay with Kumar. When the family learnt of her absence, they started looking for her. The girl’s family came to know that she was with Kumar and soon went to his place to bring her back.

Thereafter, the panchayat was convened which directed the girl’s family to punish her for dishonouring the village. The girl was then tied to a tree and caned.

Shocking video footage shows the girl lying on the ground while tied to a tree, with a crowd gathered around her. A man is seen lifting her head by her hair while another holds a whipping reed in his hand. Another clip sees her tied so tight to the tree that she is unable to move. Local news reports that the teenager had remained defiant and wanted to stay with her boyfriend.

The police received the incident’s information and reached the spot. They took the girl’s statement. The alleged perpetrators were not arrested but instead were given a warning.

The police are also looking for Rupesh Kumar who is on the run.

1.) Many left-liberals will try to create a false equivalance between this and how Hindus oppose Love Jihad. That is a fallacious argument. Love Jihad is the entrapment of non-Muslim girls (often minor) by assuming false Hindu identity or using other means like blackmail, threats. In this case, Rupesh Kumar did not assume the name of a Rahil Khan to fool the girl, and neither did he try to blackmail her with intimate videos or threats to harm the girl’s family. The girl wanted to marry the Hindu boy completely of her own volition, as several news report state.

2.) In most cases when a Hindu girl is trapped by a Love Jihadi or even if she elopes of her own volition, Hindus just lack the muscle and organization to do what the Ansari family did in this case – storm Rupesh Kumar’s house and snatch the girl back. In fact, Kumar should consider himself lucky he is not dead. Even when a minor Hindu girl is abducted and illegally converted & married by a Muslim, Hindus rely on an apathetic police force as we have seen in cases from West UP to West Bengal. This is what a Muslim man told the father of the minor Hindu girl he had abducted – “Ladki maine le li hai, tujhse wapas li jaaye to le le (I have taken the girl, take her back if you can)”.

3.) If you are shocked by the fact that police in this case did not arrest the perpetrators who thrashed the girl and merely let them off with a warning, don’t be. This is the result of decades of conditioning by the secular-liberal establishment due to which our law & order machinery now has an unwritten protocol for handling crimes committed by ‘minority’. “Let them be” seems to be the police motto as we saw in this case and also in extreme deference to Church before finally, almost reluctantly, arresting rape-accused Bishop Franco Mulakkal. Contrast it with how UP police swung into action against its own when some a lady cop beat up a Hindu girl for having an affair with a Muslim.

4.) Media and Lutyens’ Delhi will down play this incident – but if perpetrators were Hindu, we would have seen mass outrage, op-eds and TV debates about patriarchal Hindu society.

The advocates of Constitutional morality need to focus on the 200 million Muslim ‘minority’ of this country who have been repeatedly told that their religion is above any Constitution.