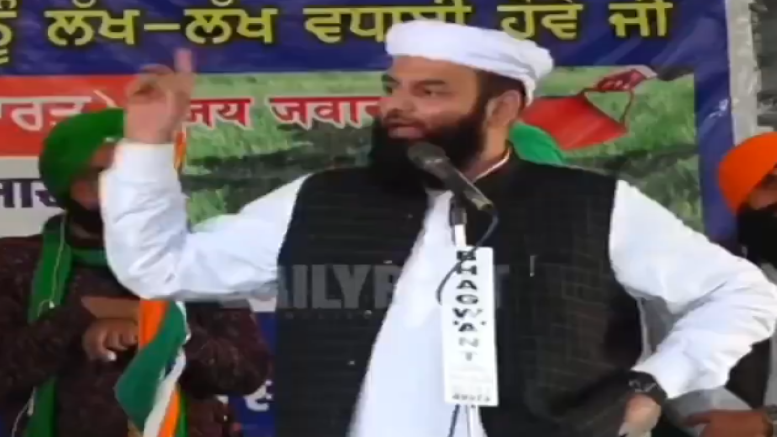 Muslim clerics in Punjab have now come out in support of Rakesh Tikait, who is one among several farmer leaders against whom the Unlawful Activities (Prevention) Act is to be invoked for the Republic Day violence. Two videos have emerged on social media showing clerics taking out rallies in support of Tikait and alleged farmers who have been protesting and even issued statements in their favor.

The first is a rally that the clerics undertook from Jama Masjid in Punjab’s Ludhiana. These clerics were headed to the Singhu border where so-called farmers have been protesting for some time now. Those assembled raised slogans against the Modi government “Modi sarkar murdabad” (death to Modi government).

“History will record that when farmers were fighting for their self-respect, Godi media was busy licking boots of government.” Muslim cleric from Punjab’s Ludhiana roaring from Singhu border. #FarmersProtest pic.twitter.com/6KSOqehKQ7

While warning the government to withdraw the bills or be ready to be voted out, the cleric is also seen taking potshots at the national media. He also insinuated that channels such as India TV, Zee News, and News 18 were spreading lies but this is a historic moment. The cleric also congratulated Hindudveshi Rakesh Tikait who had earlier spoken against Hindus and Hindu temples using the smokescreen of farmer protests. He even spoke in favor of raising the Sikh religious flag which was hoisted on the Red Fort during Republic Day after having uprooted the Bharatiya tricolor.

It must be mentioned here that the second video by Punjabi Channel Daily Post whose anchor was seen excitedly celebrating the storming of the Red Fort by Sikh extremists as also raising the Khalistani flag as told by the anchor himself. Hindupost had reported this incident.

Two separate clips have been in circulation ever since Tuesday, one showing a man hoisting a Sikh flag on a flagpole within the Red Fort complex while throwing away the tricolor handed to him by someone in the mob. Another video shows a man atop one of the domes of the Red Fort, where he hoists the Sikh flag – if you watch the full video of the second clip which was live recorded by  ‘Daily Post’ Punjabi channel, you will hear the breathless Sikh reporter shout excitedly when the Sikh flag is hoisted at the spot where the tricolor is usually hoisted…at one point he even says Khalistani flag, before quickly correcting himself to say Khalsa flag has been hoisted!

The clerics coming out in support of Khalistanis and the likes of Tikait who were inciting the mobs before Republic Day and attempted to deflect the blame post the Republic Day violence. The Khalistani bigotry behind the Red Fort violence having been proved beyond doubt, there seems to be a sinister plan to create an alliance of anti-Bharat forces such as Islamist, Khalistani, and Communist among others.

That there is a deliberate attempt to grab international attention is clear from several foreign non-entities choosing to comment on the ongoing farmer protests in Bharat without any inkling of prevailing ground realities.

Hindupost has already brought home the point that there is a sinister alliance of #BreakBharat forces, both local and foreign which was brought out in the open albeit unintentionally by Greta Thunberg. Make no mistake every perceivable anti-Bharat force has come together, having failed to a large extent during the anti-CAA protests, with the intention of creating utmost trouble and damage to the Bharatiya state.

The battle is less about farmers’ rights and more about the Hindudveshi and anti-Bharat agenda as is apparent from the coming together of forces inimical to the interests of Hindus and Bharat.