Muslim Man Kills A Hindu Girl & Her Mother After Being Spurned In Meerut, UP 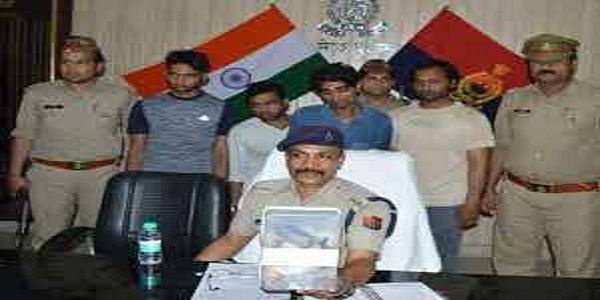 A horrific case of murders of a girl and her mother on 6th of April has come to light in the city of Meerut in Uttar Pardesh. While Hindi media has covered it in detail, there is hardly any detailed news in English mainstream media. The Meerut SP city did a press conference explaining the horrible murders committed by Shoaib and accomplices, of a girl named Neha (Anushka) and her mother Sumanlata. This girl used to work in Shoaib’s office and the tiff seems to have started with her friendship with a boy named Ankit which was not liked by Shoaib. It also seems that Shoaib used to know Sumanlata from last many years. Quoting parts of these news reports :

Shoaib had murdered Neha and thereafter shot her mother also inside a car. Nazish,  Naved, Amit and Sandeep,  who helped Shoaib in committing this merciless murder, unraveled the entire incident to police. Police too was dumbfounded after finding out the real cause and procedure of murder.

In a press conference, SP city Alok Priyadarshi spoke that Shoaib was an acquaintance of Sumanlata, Neha’s mother, which brought Neha and Shoaib closer. Neha who used to work with Shoaib in his office had another close friend called Ankit. The closeness between the two itched Shoaib a lot and it came out in its worst form when Neha on the day of crime, got a call from Ankit asking her to help him in shopping.

Shoaib tried to stop her from going with him, but she went on with Ankit after getting permission from her mother. Thereafter Shoaib rang her 10 times in 2 hours while she was with Ankit. Neha did not pick his calls and this infuriated him immensely. When she came back, Shoaib spewed profanities on her. She retaliated and soon the quarrel turned into a barbaric murder case. He strangled her to death by using wire. Once done he immediately called his friend Amit, who was with his wife. He soon came to him in the office. There they found Neha still breathing. Then they both smothered her till no life was left in her. The brutality didn’t end here. After the murder, Shoaib hired an echo from Lavad.  He asked Amit to bring Neha’s mother Sumanlata in Echo car, when she inquired about her daughter.

Amit took her from her home to Abulane situated on a flyover. He told her that Neha has gone for a seminar. Then Amit wandered here and there in car with Sumanlata. Meanwhile Shoaib came back in his Skoda after disposing Neha’s body off. He picked Sumanlata from there on the pretext of making her meet her daughter. They took her to Lavad where Shoaib parked his Skoda car and sat in Echo with Sandeep (driver) and Sumanlata, and Amit left. Then Shoaib took his gun out and shot her point blank.

After murdering Sumanlata too, they drove towards graveyard where Shoaib’s father and another boy were waiting for them. Once they reached, Shoaib threw Sumanlata’s body out and asked Sandeep to take the car away. Sandeep took the car back to Lavad to Nazish, the garage owner and narrated entire incident to him. Nazish without a second’s delay washed the car. He also stole money and jewelry from Sumanlata’s purse.

Though the four of them have been arrested, the mastermind Shoaib is still absconding. The police has failed to track Neha & Sumanlata’s bodies. The police is searching for Shoaib. They have recovered the black Skoda of Shoaib and  belongings of Sumanlata.

This is another case of gruesome violence against women in UP which has not made it to the headlines shown by mainstream media, and urban population is not aware of it except locals of Meerut. Of course, if the victims had been Muslim and the mastermind a Hindu, the news would have gone international by now. Those who mock anti-romeo squads created by CM Yogi Adityanath have no idea of the deep insecurity that Hindu women in UP feel.