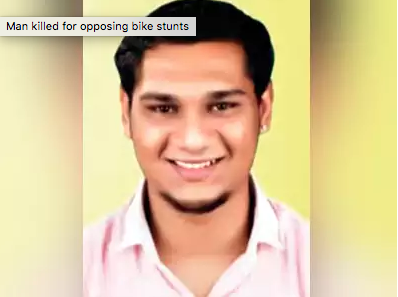 2 men, Shahzada Usman Shaikh and Anus Shaikh, have been arrested for allegedly stabbing to death BMC parking attendant Bhavesh Koli (24) who had opposed speeding by the accused and others performing bike stunts in Mumbai’s Byculla area.

“Seven bikers allegedly stabbed a man to death for opposing speeding on the ES Patanwala Marg.
According to the police, the biker got enraged after 24-yearold Bhavesh Koli tried to stop them from speeding and performing stunts

The Byculla Police have arrested four of the accused, and are searching for the remaining three. Two of those arrested are minors. Those arrested have been identified as Shahzada Usman Shaikh and Anus Shaikh, both residents of the nearby chawls.

Koli, a resident of Parel, was manning a BMC parking on the ES Patanwala Marg on Sunday when he saw some bikers speeding and performing stunts. He tried to stop them, but they went away, the police said. After some time, when the bikers returned, Koli asked them to stop. However, they again left the place, but soon returned with more bikers. Armed with sticks, rods, belts and knives, bikers allegedly assaulted and stabbed Koli. The badly injured man was admitted to JJ Hospital where he was declared dead.

“They (the accused) are all school dropouts and used to do stunts on the road. As Koli opposed them, they got into an argument with him and stabbed him to death,” said an official from Byculla police station.

“We are still searching for the remaining three more accused, and are hopeful that we will find them soon as we have some clues. All of them are residents of Irani Chawli and Pradhan Chawl area in Mazgaon,” said the official.”

Such violence by Muslim youth when checked or questioned is not new. In August 2016, Mumbai police constable Vilas Shinde (52) died after being assaulted by Ahmed Qureshi (21) for hauling up Qureshi’s 16-year-old brother who was driving without a helmet. In 2015, two traffic policemen in Delhi were brutally assaulted by traffic violators -Shahnawaz (22), his brother and their father Sagir Ahmed (65) – after the officers asked the accused to pay a fine for not wearing helmets.

What such periodic violence is telling us is that there exist Muslim-dominated pockets across the country which are considered ‘no-go’ zones even by police & municipal authorities, and where the law of the land exists merely on paper. The place where Bhavesh Koli was stabbed to death – Byculla – is one such area in Mumbai. Watch this interview with Shri RK Ohri (retd IPS) to understand more about these ‘no-go’ areas and how they pose a clear threat to national security.

Another phenomenon which this incident highlights is the growing menace of biker gangs who run riot on our streets, especially on the night of  the Muslim festival of Shab-e-Barat. This article ‘Militant bikers as horse-riders of Jihadism’ shows just how the ubiquitous motorcycle is turning out to be another vehicle of choice for the jihadi element in our country and across the world.