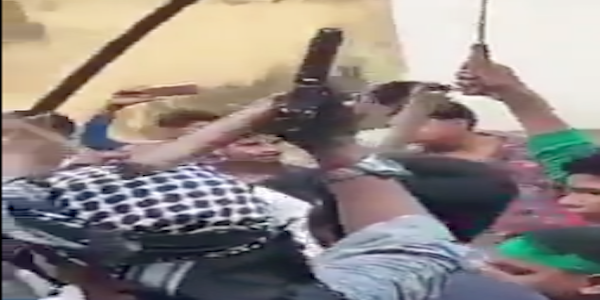 Multiple incidents of vandalism and violence, inadvertent or otherwise, by weapon-wielding Muharram processioners have been reported in the last week.

A Muharram procession in the upper Assam town of Dibrugarh turned ugly after cars were vandalised, and visuals of processioners damaging the cars went viral. There were allegations that police remained mute spectators as the procession passed through on the busy HS Road.

Two men were later arrested for the vandalism, but released on bail.

There were also reports of people casually brandishing guns and other deadly weapons like swords during Muharram processions in other parts of Assam.

In Malda, West Bengal, a 6-year-old boy standing by the roadside with his father to watch a Muharram procession suffered bullet injuries in his chest after some men fired in the air. Display of firearms was also reported from Kaliachak, which had witnessed communal clashes in 2016. Participants in the Muharram rally there flaunted firearms only a stone’s throw from the Kaliachak police station, despite the district police’s ban on the use of firearms, swords and other weapons.

"Peaceful" Muharram procession in Kaliachak, WestBengal where carrying open arms, swords is legitimate. But during RamNavami carrying even a toy sword or a stick is prohibited. @AmitShah @AmitShah @HMOIndia @BJP4Bengal #Muharram2019 pic.twitter.com/yxtw9IVcCa

In a video which has gone viral on social media, Muharram processioners can be seen surrounding a biker, forcing him to dismount and then completely destroying his bike. Date and place of the video could not be ascertained.

In Bihar, 60-year-old cut his own neck by mistake & died while showing off his swordsmanship during a Muharram procession in Bihar Sharif.

In Prayagraj, UP, a car which got stuck during a Muharram procession was first vandalized and its window panes broken. The mob then proceeded to assault the 3 Hindu occupants of the car. Later, locals jammed the road demanding arrest of the accused.

Senior police officers managed to calm the crowd and make them disperse late at night. SSP said that the incident had been ‘blown out of proportion’ and that police would take action against those spreading ‘false’ messages that many cars & passers-by were attacked.

Such incidents of violence during Muharram processions are reported almost every year – exhibit 1, exhibit 2.

Muharram is a festival where Shia Muslims mourn the death of Muhammad’s grandson Imam Hussain Ali by hitting themselves with sharp objects and carrying out “tazia” processions. A “tazia” is a replica of the tomb of Ali. But for some strange reason, this open & deadly display of weaponry, and disturbing self-flagellation invites almost zero commentary from the chatterati who find fault in every and any Hindu celebration. This tweet from last year sums it up quite well –

Realities of UP. Every year. Note how no urbanist/urbanista is bothered or upset like with Kanwariyas.

Shias constitute roughly 15% of Muslim population across the world, and the same proportion holds true for Bharat. Shias and Sunnis (the mainstream sect of Islam) have been locked in a bitter, violent struggle over the question of leadership succession soon after the death of Mohammad in 632 CE.

Shias and other minority Muslim sects are heavily persecuted in Sunni-majority Pakistan, even though both communities (and other Muslim sects like Ahmadis) joined hands during partition for creation of Pakistan as a separate homeland for all subcontinental Muslims.