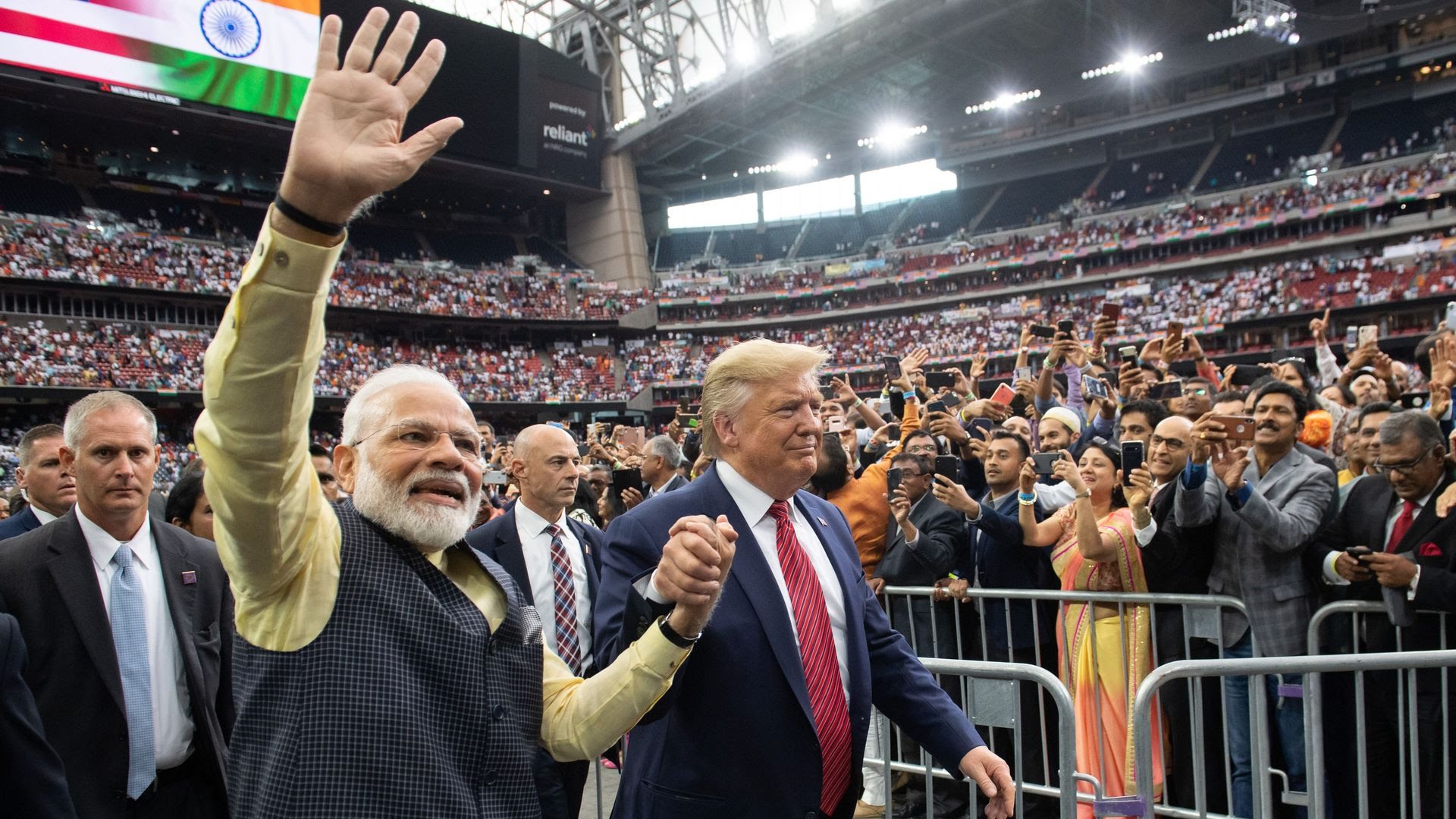 Prime Minister Modi took Houston by storm even as the state of Texas was still recovering from nature’s own fury. Modi’s resounding voice resonated from the podium of the NRG stadium in Houston, Texas as President Trump looked on in awe at the popularity of his counterpart.

Prime Minister Modi virtually launched President Trump’s election campaign amongst the 50,000 plus Americans of Bharatiya origin as he reinvented his own winning slogan with” Phir Ek Baar Trump Sarkar”.

Modi did not stop there and in an unprecedented gesture after finishing his impromptu address, he made Trump do a victory lap around the stadium with hands held together putting their security details in a tizzy.

Apart from providing an impetus & much needed thrust to Trump’s 2020 election campaign amongst the 4 million plus Americans of Bharatiya origin, Modi’s victory lap with Trump had a strong message for the Democrats for their anti-Bharat rhetoric just prior to his visit.

The camaraderie & bonhomie notwithstanding, Modi did not let go the opportunity to collar Pakistan for harbouring & shielding terrorists even as he reminded America that 9/11 in New York & 26/11 in Mumbai both had their genesis across Bharat’s border.

Trump also echoed his words when he talked about the threat emanating from radical Islamic terrorism. Putting his seal on the Indo-US partnership, Trump said amidst thunderous applause that Bharat will not find a better friend in the White House.

In a jibe at the anti-Bharat lobby in America which was incessantly ranting about human rights, Modi set the record straight on the abrogation of article 370 saying that all benefits will now be available to the people of Jammu, Kashmir & Ladakh.

To reinforce his point & to silence the gibberish regarding Article 370 in the US, particularly when more than a dozen US lawmakers were present in the stadium, Modi reiterated that even though his government did not have a majority in the upper house, the abrogation of Article 370 was passed by two thirds majority in both houses of parliament.

Even as all channels zeroed in on the Modi-Trump mega show, there were a couple of idiosyncratic & old-fashioned Western media outlets which decided to give the coming together of 2 heads of states of the largest & oldest democracies of the world a miss because they had ‘more important’ things to show their audience.

Thus, American CNN, known for Trump bashing, chose to harp on the possible impeachment of Trump because of his alleged attempt to use his office to influence the Ukrainian President to act against his political opponent Joe Biden’s son for his business interests in Ukraine, just as the US President took to the podium in Houston.

BBC, another eminent mouthpiece of the Western world, also did not think it worthwhile to air this event celebrating the partnership of 2 great & vibrant democracies of the world, but ran an interview on Paul McCartney & childhood photos of him brushing his teeth in different poses, even as PM Modi’s voice was reverberating across Houston.

Perhaps the colonial hangover & the monarchial tendency still persists towards nations which were once ruled by the British, even though these nations have outgrown British imperial tyranny long ago.