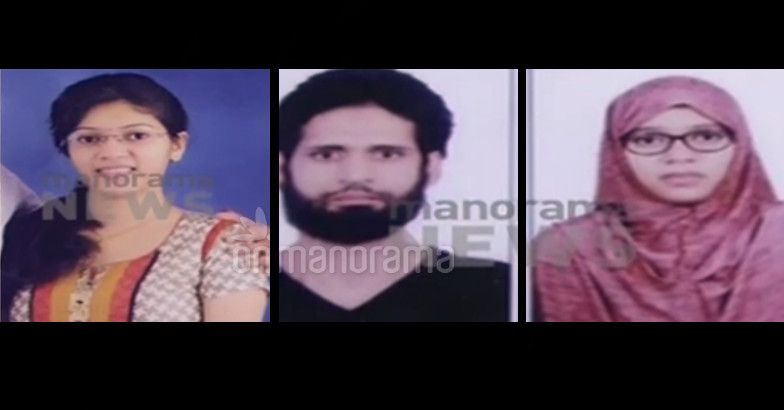 Recent news from manoramaonline.com has raised serious questions on the aggressive religious radicalization and conversions going on in Kerala. The state has recently seen 21 missing youth, who have most likely joined IS as per various reports.  The missing youth include 2 couples; both the boys and 1 girl were Christian, while the other girl was Hindu, and all of them converted to Islam. The Hindu girl, Nimisha, was a student of Kasargod medical college and was indoctrinated, married and converted in just 4 days.

As per ManoramaOnline, “Kasaragod district panchayat member V.P.P. Mustafa said that during Eid, the parents of two missing youth received this WhatsApp message ‘We are not coming back. Here there is Divine Rule. You also should join us’. ‘We have joined IS to fight US for attacking Muslims’, read another message.”

The father of the above mentioned 2 Christian boys has revealed that his sons Eesa and Yahiya, who along with their wives (original names – Nimisha & Mariam) were inspired by the Islamic preacher Zakir Naik.

While the parents and opposition parties are aggressively asking the state government to hasten the probe, unconfirmed reports suggest more people are missing from different parts of Kerala. Various Hindu and Christian organizations are demanding that this issue cannot be swept under the carpet.

Here are the details of people missing in kerala – at least 4 of them are Christian converts and 1 is Hindu. There are 2 children as well in the missing group. The parents of missing youth are narrating how they turned into such hardliners. Most are well educated, some are doctors and engineers, and were doing good financially. Quoting from  Indian Express, a parent says,

“My eldest son Dr. Ejas and his wife, a dental student, took their two-year-old son away, too. Ejas’s wife was carrying their second child and preparing for her final-year exam. My second son Shias, a management graduate, left with his pregnant wife, a physiotherapist“.

The Hindu girl Nimisha’s mother has expressed her anguish and met the Kerala CM. As per reports, she tried to stop her daughter from proceeding but was not successful. There is no doubt that religious extremists are leaving no stone unturned to lure youth into the fanatic ideology of IS – they have infiltrated educational institutions, hospitals etc. while Muslim organizations are not truly bothered about it except defending Islam ideologically.

There appears to be an industry of religious conversion running in Kerala. While Christian organizations lead in religious conversions, Islamic preachers seem to be leading in religious radicalization. In 2012, the then Kerala CM had revealed that a total number of 7713 persons were converted to Islam during 2006-2012. Interestingly, he had said no statistics were available as to the number converted to Christianity during the period. Among those converted to Islam during 2009-12, 2667 were young women of which 2195 were Hindus and 492 were Christians.

Quoting this IndiaToday article of 2012 – “According to top sources in police as many as 15 lakhs have been converted to Christianity in the last 20 years as per official statistics provided by the State Converted Christian Corporation. “Muslims have only two institutions and Hindus only one who have the authority to convert. But every Christian church has this right” said a top police official.

The current Kerala CM, Pinarayi Vijayan has termed even discussion on this worrying development as an ‘attempt to create anti-muslim sentiments’ and issued the anodyne statement ‘terrorism has no religion.’ Though the state government has said that it will coordinate with central agencies in the probe, the CM remains defiant on tackling the issues of religious conversion and radicalization by both Islamic forces and Church organizations.