Meet Qaiser Ameen Bhat: the Stone Pelter Who Died During the Nowhatta Attack on CRPF Vehicle 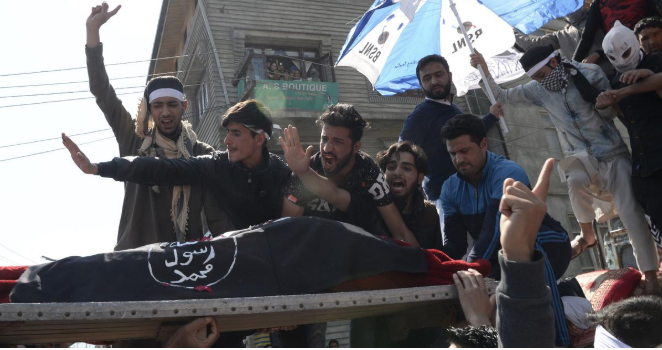 By now everyone in Bharat has seen the video: a CRPF gypsy, returning from inspection of a deployment (i.e., not doing a policing operation in Nowhatta) was spotted and attacked viciously by a mob of hundreds, from 3 sides.

The mob used stones, sticks, and even a bicycle to attack the gypsy. All the while, they were trying to open the door of the gypsy so that they could drag out the CRPF jawans. Why? Not to garland them with malas, but to lynch them—something they had done to Mohammed Ayub Pandit (the J&K policeman deployed outside the same mosque these youngsters had heard a sermon in) a year ago.

Now, if you read reports on this from separatist propaganda outlets like Kashmir Times, Rising Kashmir etc. (see for example this piece, : you will think that Qaiser Bhat was a peaceful man, in bad economic condition, taking care of his two sisters (their only “sahara” a la a Hindi movie), who wanted to create a good life for himself, and was mercilessly slaughtered by the cruel Indian CRPF.

What is the truth? Let us find out

The most in-depth eye-witness account of this episode can be found in the left-leaning, Hinduphobic outlet Scroll. Here are the relevant parts:

1. Qaiser Bhat was a regular stone pelter since 2010! Here are his relatives speaking:

According to relatives, Bhat had been a regular at the stone-pelting protests in Nowhatta since 2010. “He used to be clever enough to defend himself,” one of Bhat’s cousin said. “I don’t know what happened this time around.”

2. The viciousness and intensity of the attack on the CRPF is described by the eye-witness here:

Scores of young men rushed towards the white Gypsy, hurling stones, bricks, and even bicycles at it. Moments before the vehicle reached the square, it slowed down and protesters surrounded it. Only the top of the vehicle was visible from the pavement on which I was standing.

3. The mob had actually managed to open the door of the gypsy at one point. Here is the eye-witness:

Some men attempted to climb on top on the Gypsy, while others pushed the vehicle to the side. At this point, said one protester, the passenger door of the vehicle was opened.

Seeing the intensity of the attack, the driver, Vishal Ji Pawar (25), stopped briefly but the furious mob tried to force open the door of the co-driver where SS Yadav (54) was sitting.

Yadav recalled, “They tried to pull me out but luckily the CRPF soldier behind me forced the door shut. I knew gun was not an option, there would be casualties. No one would have fired till I said so.”

The eye-witness says that after the gypsy left, some protesters were angry at others for failing to drag out the CRPF jawans (so that they could be lynched). This is the type of protester we are dealing with in Kashmir. Not exactly peaceful….

4. Qaiser Bhat was in no economic difficulty, and was rather comfortable. Again here is the eye-witness report:

According to the cousin, though Bhat had lost his parents early, he had no financial difficulties. Their house in Fatehkadal had been rented to tenants and the three siblings were taken care of by their uncle and aunt.

5. Finally, perhaps speaking most clearly to the type of person Qaiser Bhat was, and what ideology he subscribed to, his coffin was draped in a ISIS flag! Here is the picture:

I will leave the reader to ponder whether this person was an innocent person, in lot of financial difficulty, who the CRPF could have avoided killing (without being lynched themselves), or was he a hardline Islamist, a regular stone pelter, living a comfortable life, whose death was unavoidable if our CRPF jawans were to protect their own lives.