I was going through CNN on line just a while ago, and the following two news items caught my eye:

First, the news of Ms. Anny Divya, the youngest captain of a Boeing 747 (Air India), featured by CNN. 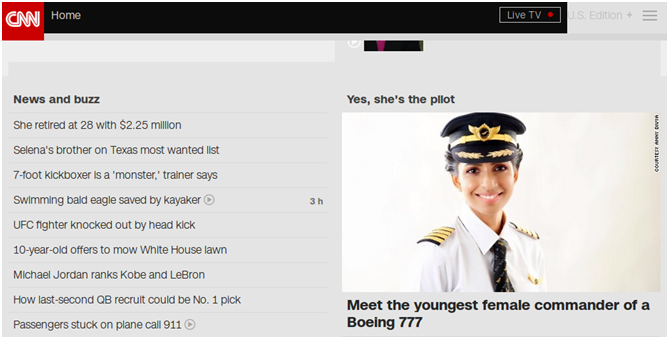 I read it, felt happy and proud.  Then I scrolled further down, and the following report also appeared. 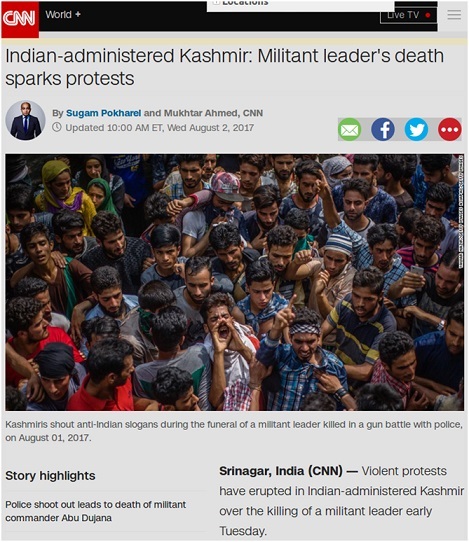 This news is about the massive protests (violent) witnessed in Kashmir to protest against the killing of the Lashkar-e-Toiba terrorist Abu Dujana by the security forces.  It has not been that long since the murder of 8 Amarnath pilgrims—6 of them women—by a LeT and Hizbul team (perhaps guided by Abu Dujana).  At the time, we witnessed no protests in the valley (something I wrote about).  Indeed, what we got instead was an assurance by some high-profile, but unfortunately shallow-in-their-knowledge journalists that “every Kashmiri I know has condemned the attack.” Furthermore, such people then tried to foist their “optimism” about this reaction (as real as the emperor’s clothes), upon average Bharatiyas.

Well, to my fellow Bharatiyas let me say this: THIS is what a Kashmiri protest looks like.  Thousands of people take to the streets.  Anti-Bharat slogans are chanted.  Security forces are targeted by mobs of stone-pelters.  Bandhs are called for and observed (mind you, no one called for a bandh when Hindu pilgirms were slaughtered).  It is an international event—CNN feels it necessary to cover it and reports the dead terrorist as a “militant leader” unmindful of the fact that he belonged to an organization (LeT) designated as a terror organization by both US and Bharat.

I have no axe to grind, and I don’t make my living fooling the people of Bharat by spinning preposterous theories about Kashmiri sentiment. I go by the facts on the ground that are reported by serious media channels. And from these facts, I can tell you one thing: there was NO Kashmiri protest, let alone backlash, when Hindu pilgrims were slaughtered. Indeed, I would wager that a large number of average Kashmiris felt not-too-bad about it.  If the reports from Yatri survivors that shop keepers laughed at their plight can be extrapolated (and I would any day give more credence to such a method than to theories by self-appointed pundits of our media), then Kashmiris felt fairly good about the Amarnath butchery.

And they felt very bad when Abu Dujana – an LeT commander, no less – was killed by our security forces.

And as evidence, I only offer the facts on the ground.  No protests when Amarnath Yatris slaughtered (a few shamless insults to their memory instead). But thousands gather when Abu Dujana is killed. People of Bharat are not stupid. We are the oldest living civilization in the world – we didn’t come so far by being stupid.  You can judge for yourself.  The pictures and reports are in front of you.  Make up your own mind.

(In memory of the 8 Amarnath Yatris who were slaughtered, for no reason other than that they were Kafirs)