Maridhas stands vindicated as HC quashes another case against him 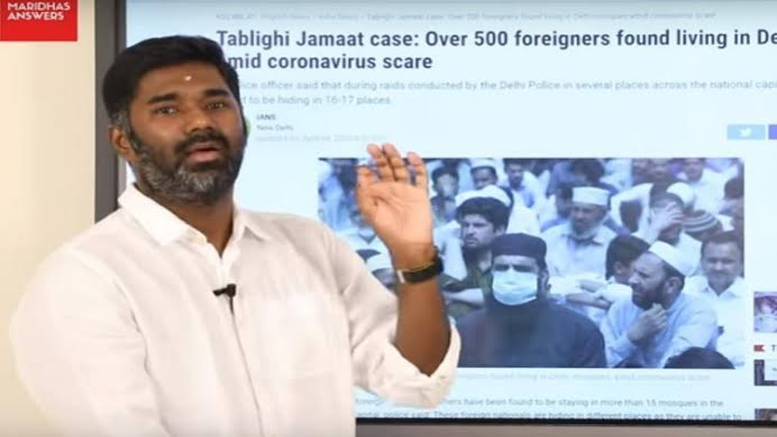 Another frivolous case filed against Youtuber Maridhas has been quashed by the Madurai bench of Madras High Court. An old case on Maridhas for his video exposing Tablighi jamaatis was revived to keep him in jail. But the court felt that he had only criticised the jamaatis conduct and not the religion itself and quashed the case.

Maridhas was earlier booked for exposing Dravidianist social media accounts that celebrated and mocked CDS Bipin Rawat’s death. He had questioned whether Tamil Nadu was becoming like Kashmir with DMK coming to power as separatist elements are given freehand. The Madurai bench of the Madras HC declared the charges invalid and quashed the FIR. But Maridhas was arrested again for another case filed by Tamil Nadu Muslim Munnetra Kazhagam (TMMK) in 2020.

Islamists had lodged a complaint against him for his video exposing Tablighi jamaatis intention to spread Covid-19 virus. He had called out their conduct in going absconding and spreading the virus or d instead of undergoing treatment. At that time TN government found it difficult to contact trace Tablighi jamaat members who had gone missing without a trace after attending the super spreader event at Nizamuddin Markaz in Delhi.

The case was heard by justice GR Swaminathan who had earlier given bail to the jamaatis after police had booked them for violating Covid-19 norms and other pandemic rules and regulations. He was the same one who heard the first case against Maridhas and quashed it. He had faced unimaginable casteist abuse from Dravidianists for quashing the case. The judge observed that in the early days of the pandemic Tablighi jamaat came under severe scrutiny and criticism in the entire media.

He said that if the criticism of the media can be accepted then the “slightly exaggerated comments from Maridhas can also be accepted“. After going through the transcription of the entire video, he felt that Maridhas had not questioned the religious beliefs of Muslims but only asked the attendees of Nizamuddin Markaz event to get themselves checked and treated. Terming the registration of the FIR as illegal, the judge said that “sharp criticism against an organisation would not attract the offences mentioned in the FIR“.

Maridhas is still not free though, as another case of forging an e-mail still stands to be quashed. Meanwhile another YouTuber Kishore K Swamy who was booked under Goondas Act for exposing DMK leaders’ amorous past has also been given relief. The Madras HC quashed the order passed by Chennai police commissioner to detain him under the goondas act. A whopping 6 cases were filed against him for which he was allowed to apply for individual bail by the court. Another social media influencer Shibin who was arrested under the IT Act was given bail today.

TNBJP president K.Annamalai took to Twitter to criticise the DMK government’s eagerness to suppress dissenting voices and announced that the BJP legal team secured Shibin’s bail. He also tweeted that “BJP will continue to support our other functionary Kalyan Raman who is lodged under Goonda act under frivolous charges”. With case after case being quashed by the courts, fascist DMK government’s efforts to muffle dissenting voices stand exposed.