Are Maoists Losing Steam In Their Stronghold Areas? 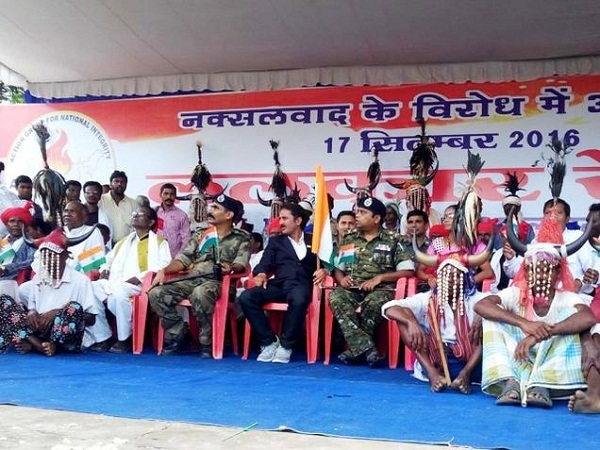 Bastar in Chhatisgarh saw a lakh of people getting together for a rally against Maoists . As per this news report :

“It was convened under the aegis of Action Group for National Integrity (AGNI) – an organisation spearheading anti-Maoists protest in the region for past few months.

“Around one lakh people participated in the rally and unanimously raised voice against Naxals and violence,” AGNI national convener Anand Mohan Mishra told PTI. Bastar has been bearing the brunt of violence for over three decades and facing dearth of development works due to the menace. But now, the people of the region, particularly tribals, want to see peace and development, he said.

People and representatives from at least 70 social communities, school and college students and local citizen voluntarily took part in the rally which clearly indicates they are fed up of the Maoist violence, he said.

The move has also encouraged security forces fighting Naxalism in the region, Mishra said. Folk dance and other cultural programmes were also performed by tribal artistes during the rally.

Meanwhile, Inspector General of Police, Bastar Range, SRP Kalluri said, earlier people did not have the courage to speak against Naxals, but now the situation is changing. By extending support to the rally, the residents of Bastar have indicated that they are with us. The day is not far when Bastar will be free of Maoist menace,” Kalluri said.”

Many people on social media voiced out support for the rally. One of the government secretaries of Chhatisgarh posted :

It seems that local residents of Bastar are also fed up with lack of development in the region and have finally mustered the courage to speak against Naxalism. Going by this news report :

“According to the Union home ministry, the number of Maoists killed and surrendered in 2016 so far has surpassed all records since 2011.

According to the data of the Union home ministry’s Left Wing Extremism (LWE) division, there has been a significant fall in the incidents of Maoist violence and deaths of civilians since 2011.

It seems that BJP government in Chattisgarh is cracking whip on Maoist violence. Our ex PM, Manmohan Singh had said on record during his tenure that Maoist violence can be called as the biggest internal threat to our country. While many pro-naxal politicians, NGOs and legal groups still allege that police force fighting naxals are more cruel to local residents and naxals are fighting for ‘freedom’, people of Chhatisgarh, particularly Bastar, have come out bravely in large numbers to protest this kind of terrorism.  This rally is an answer to the likes of Marxist Maoist comrades like Sitaram Yechury and Kavita Krishnan, who promote absolute lawlessness and violence against helpless in the name of social freedom.

Incidentally, in June, villagers of Kumakoleng, Nama and Soutnar in Bastar district had complained to police that visiting faculty from JNU (Jawaharlal Nehru University) & Dehi Unviersity, accompanied by CPI-M workers, have been spreading disaffection regarding the State of Bharat, and instigating villagers to support the Naxalite/Moaist terrorist movement.

People of Nepal have also condemned openly the Maoist attacks on educational institutions by ‘Young Communist Force’ demanding free education for children. No major casualty was reported but educators and parents have come out strongly against these attacks, condemning these as highly deplorable violent acts.

This part of the world seems to be rising against the instability and loss of life & resources caused by Maoist terrorism and these Naxals are beginning to lose steam in their stronghold areas.