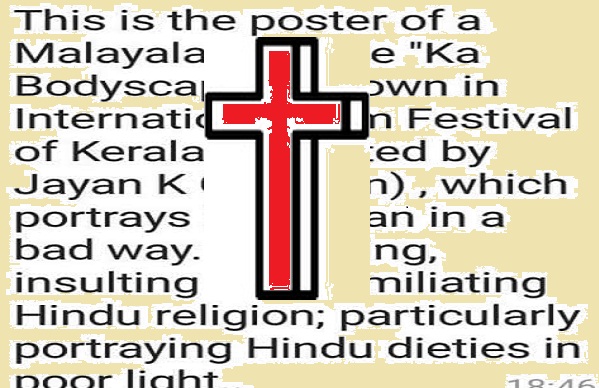 US based Malayalam Filmmaker Jayan Cherian chose to insult Hindu deities and Hindu religion in his latest movie ‘Ka Bodyscapes‘. The movie was released in US in 2016, but the Censor Board in Bharat refused to certify the film even under ‘A’ category citing many reasons, one of which was insult of Hindu religion. In the movie, a gay painter is shown painting his object of desire, a kabbadi player named Vishnu, as Hanuman (shown nude), who is flying carrying different books / gay literature over a temple. The painting also shows RSS members flying kites shaped as cows. Here is the image of the painting shown in the movie : The synopsis of the movie Ka Bodyscapes is quoted here :

In the city of Calicut in the Indian state of Kerala, three young people grapple with entrenched structures of patriarchy – the free-spirited painter Haris, his love interest and friend, the athletic, mild-mannered Vishnu, and a fiery young woman, Sia. The air is filled with protests and challenges to the rising religious and economic right wing. KaBodyscapes cuts out a slice of contemporary Kerala, recreating in fiction the struggles of the young to gain space in the face of Hindu right-wing aggression in particular and community and class oppression in general. Haris, a talented but struggling young painter, is on the verge of being catapulted to fame. As he prepares for his first solo exhibition, he persuades Vishnu, the object of his desire, to join him in the city. Vishnu is fully within the grip of his Hindu right-wing family, which limits his choices; his desire is muted. But he joins Haris and stays with him in his tiny rented apartment as a reluctant yet willing lover and model. It is perhaps no coincidence that he is a kabbadi player – kabbadi being a game in which members of two rival teams must enter and exit each others’ delineated spaces alone, challenging the rival team to capture them. KaBodyscapes opens with Vishnu making precisely such a challenge to a rival team as Haris watches adoringly – and fails to return safe to his own space. It forebodes the tragic denouement of their romance.

Parallel to the doomed lovers’ tale runs the story of Haris’ friend and confidante Sia, a white-collar worker in an export firm. Sia struggles both at home and at work. At home, she battles the misogynist restrictions her conservative Muslim relatives impose on her even as they deny her economic security. At work, she questions the violent and humiliating labor controls, and the dehumanizing surveillance. Like Haris and Vishnu, Sia’s struggle is lonely and uphill, even when her friends rally around her in critical moments. As Haris, Vishnu, and Sia hurtle towards a confrontation with Hindu right-wing forces and predatory capitalism, their struggles cannot be but against the abjection of body and desire in the everyday life of the city. Haris’ deeply cosmopolitan art, which reclaims the body and desire, invokes the Egyptian Ka, the spiritual body-double, thus seizing the body from its degradation and elevating it as the necessary vehicle of Ka. Vishnu, however reluctantly, awakens to his body and slowly learns to answer its desires. Sia protests against the misogynist punishments meted out to menstruating women workers, and in moments of solitude, explores her own body through intense and loving touch. Each of these defiant acts provokes severe punishment and for these young people, it marks entry into adulthood in a challenging world.

The movies mixes up various issues and seems to primarily give the message that Hindu Dharma is the root of all restrictions on humans. The Censor Board in Bharat refused to pass this film even under ‘A certificate’ and reiterated this decision in the court too.  Parts of the CBFC’s whole statement are produced below, this statement is mentioned on the film website : 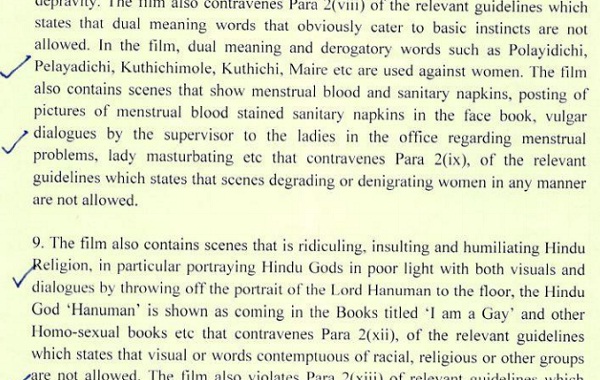 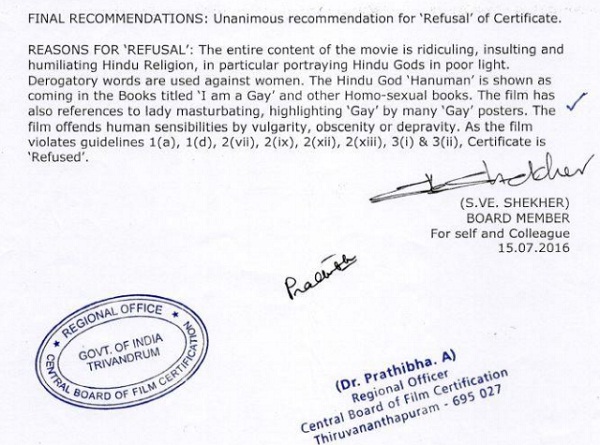 The mainstream English media has been supportive or neutral about this film through out. Going by these news reports, this filmmaker gives a very lame defense, ‘it isn’t actually the painting of lord Hanuman, it is actually the painting of character Vishnu in the film’. The depiction is however too clear, vulgar and in the face. Knowing fully well that Hanuman ji was a brahmachari (bachelor yogi) in Hindu texts, his nude depiction related to homosexuality will offend any sane Hindu.

The synopsis of the movie can be criticized on many levels, most obvious being the relationship shown between homosexuality and Hindu religion. There really is no relationship. Hindu Dharma doesn’t ask to kill homosexuals unlike Islam. Nor does Hindu Dharma encourages homosexuality. Christianity considers homosexuality as a sin, with Catholic teaching condemning homosexual acts as gravely immoral. Kerala today has a high population of Muslims and Christians – close to 50%. If the director really intended to take up cudgels on behalf of homosexuals, he would be better off taking on the Church and Muslims clergy who are the most vocal defenders of the Victorian-era Section 377 of IPC (Indian Penal Code) which criminalizes homosexuality.

Another very weird aspect of the film is, the name of the Muslim protagonist ‘Sia’. It is interesting to note that the filmmaker Cherian, chose to name the Muslim character fighting misogyny as ‘Sia’. How often does one see Muslim families naming their daughters after Hindu goddesses? May be, this was a clear attempt by the filmmaker to avoid vandalism by Muslim mobs, which would be difficult to avoid if the name would be a common Islamic name!

Coming to the homosexuality theme of the movie, it is only obvious that many in society do not promote abnormal tendencies. Not that homosexuals should be criminally prosecuted, (after all how many are actually jailed), but the claim in the synopsis that ‘Hindu right-wing family of Vishnu has muted his desires’ is too funny and bizarre. To be honest, what desires is the movie talking about? Homosexual desires? Knowing fully well that the world is still far tilted towards straight sexual tendency humans and that a civilization progresses only when a male and a female mate, how can it even be considered normal to have homosexual desires? Is the movie trying to force homosexual tendency into Hindu society?

Then, of course, saving and respecting all forms of life, specially cows as a tradition of Hindu culture is obviously mocked. So is RSS.

Finally, no surprise that Christianity does not find a mention in the synopsis of this movie. Of course, the filmmaker  Jayan Cherian says it has nothing to do with his own religion and he can’t change his parents.