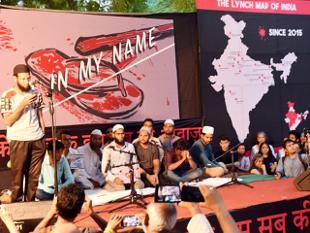 The tragic murder of a Muslim youth in an argument over a train seat in Haryana, has resulted in a social media campaign #NotInMyName and protests in a few cities across Bharat. The protesters, led by film-maker Saba Dewan, call it a ‘citizens protest against the recent spate of targeted lynchings of Muslims in India’. They further add –

‘These attacks on Muslims are part of a pattern of other incidents that involve Dalits, Adivasis, and other disadvantaged and minority groups across the country. Through all these heinous crimes the Government has maintained a brazen silence, a gesture that is being read as the acquiescence of Indians’

The protest appears to be inspired by a 2015 ‘Not In My Name’ campaign carried out by some Muslim groups ‘to show how ISIS misrepresents Islam’ in the wake of a terror attack in Paris, France.

In this article we will look to analyze the protesters’ chilling message that Muslims in Bharat are under threat from blood-thirsty Hindu mobs who have the backing of the NDA Government.

That mob justice is an ugly reality of life in Bharat will not be disputed by anyone. Colonial-era laws, lumbering judiciary, and a heavily politicized and underfunded police force inspire no confidence in ordinary citizens and embolden criminals. Add to that, social strife spawned by the #IdeaOfIndia intelligentsia who have encouraged sectarian identities under the garb of secularism and diversity – and you have a combustible mixture.

Bharat is a democracy and every citizen has a right to protest for issues that affect her/him. But any objective observer for the last 3 years (since the Modi Government was sworn in) will tell you this – the idea that Muslims and other minorities are being lynched and attacked as part of a targeted campaign by ‘Hindutva extremists’ with the tacit approval of the NDA Government is at best a distortion, and at worst sheer propaganda.

MSM (Mainstream media) through its Rising Intolerance, Church Attacks, Award Wapsi narratives has played a key role in embedding this perception in the minds of some urbanites. But in the day & age of social media, where MSM lies are routinely called out, there really is no excuse to fall for their agenda if one is willing to look at things dispassionately and with an open mind.

We do not have the resources to conduct detailed research like a media house or Delhi think-tanks. But crowd-sourced databases like this, our own repository of articles from the last 18 months, and research by twitterati like @ARanganathan72 and @audit_uscirf, clearly show that –

1.) Lynchings of Hindus at hands of Muslims are far more common. Islamists also threaten Muslim atheists or those they consider munafiq (hypocrites)

3.) The latest #NotInMyName campaign is a selective portrayal of facts to project a false narrative.

Our aim is not to gloss over the murders of Junaid, Pehlu Khan and Akhlaq, but to bring about a sense of balance when such sensitive issues are being debated, and to make us all think about why other victims of mob violence like Sawan Rathod, Pankaj Narang, Ramesh Jadhav, Mohammed Ayub Pandith, Kaushik Purkait, Rohit Tanti and many more barely register with us?

3.) West Bengal, 2016 – Indrajit Dutta from Birbhum was lynched to death for refusing to contribute for Moharram observance.

5.) West Bengal 2016 – 22-year-old ITI student Kaushik Purkait was beaten to death in Diamond Harbour by a TMC leader-led mob that mistook him for a buffalo thief

7.) Maharashtra, 2016 – Mumbai Police constable Vilas Shinde (52) was battered to death by Ahmed Qureshi (21) for stopping Qureshi’s 16 year old brother who was driving without a helmet

10.) West Bengal, 2015 – 5 Hindus from OBC community were lynched when they crossed a mosque while returning from a Dharmic religious function.

11.) Maharashtra, 2014 – Ramesh Jadhav was lynched in his home by 5 Muslim men after he tried to stop them from harassing and attacking a woman in the neighborhood.

There have been dozens of brutal hackings of Hindu activists in Kerala, Tamil Nadu, Karnataka and other states such as the brazen daylight murder of RSS worker Rudresh R in central Bengaluru by a fanatical Muslim gang. But these lynchings are brushed away as ‘routine political violence’ by left-liberals.

Here is a list of lynchings reported from 2013, when UPA was in power – data gathered by @ARanganathan72 – 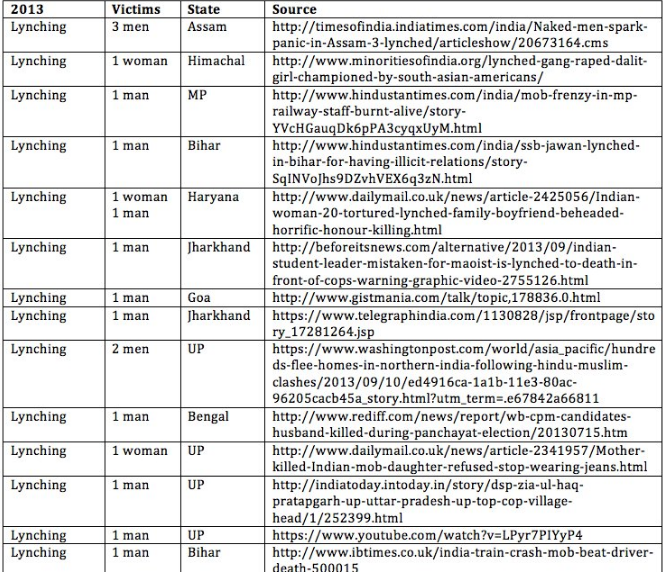 Ranganathan further digs into NCRB data to find that ‘From 2009 to 2013, Crime against Dalits rose by 17.94%. 1 crime every 15 minutes. For 5 years running.’ He questions why no one back then asked if intolerance against Dalits was rising under Man Mohan Singh, or whether UPA mainstreamed violence against Dalits?

This excellent analysis shows how the current #NotInMyName has clear political undertones and appears to be a successor to the #GrowingIntolerance campaign that started in 2015 to guilt trip the Hindus who had voted for Narendra Modi.

The hidden hate-soaked agenda of these ‘protesters’ can be seen through anti-Hindu banners, directed against ‘Hindu terrorism’ and ‘Brahminism’. They want to make this an international issue and there have also been calls for foreign investors to refrain from investing in Bharat over this issue.

“16-year-old Vipin Kumar and his friends held on to signs that read: ‘Muslim Lives Matter, All Lives Matter’.

“Our teacher told us about a boy who was killed on a train last week. We never thought twice about not showing up here today,” said Kumar.

Inspired by the ‘Black Lives Matters’ movement in the US, Kumar’s teacher Azad Khan, who teaches “life skills” to the boys in an NGO in Mehrauli, got the group to paint signs. “We need to be inspired by other such movements from around the world,” said Khan.”

But this fight is not between those who support Narendra Modi and those who oppose him. It is a fight for the Hindu mind – will the Hindu finally learn to see things as they are, or will he/she again fall for the irrational self-loathing which vested interests want to trigger within?

The #NotInMyName campaign has succeeded in one part of their mission, which was to gain credibility by eliciting a response from the PM.

Killing people in the name of Gau Bhakti is not acceptable. This is not something Mahatma Gandhi would approve: PM @narendramodi

This statement all but confirms the theory that Junaid was murdered by ‘gau bhakts’ whereas the facts at hand show that it was a tragic outcome of a squabble over a train seat. Unfortunately, this will be used by propagandists who want to push their narrative that ‘cow vigilantes’ are running amok in Bharat.

But, the PM’s statement is also a wake-up call for Hindus. Modi surely understands that he came to power on the back of a Hindu vote against the apathy, corruption, lethargy and anti-Hindu actions of the ‘secular’ front. Yet, he felt compelled by the agenda-setting power of the left-liberal coterie to blame a large section of Hindu society (gau bhakts – i.e. those who adore the cow) for a crime they did not commit.

This clearly shows that despite the advent of social media, the Hindu voice is still not heard or taken seriously in the corridors of power. Instead of feeling helpless and breast-beating, this is the challenge that all Hindus of this generation must take head-on over the next decade.  Re-electing Modi in 2019 is just one of the things we need to do, but creating space for the Hindu voice in bureaucracy, academia and policy spheres is as important.