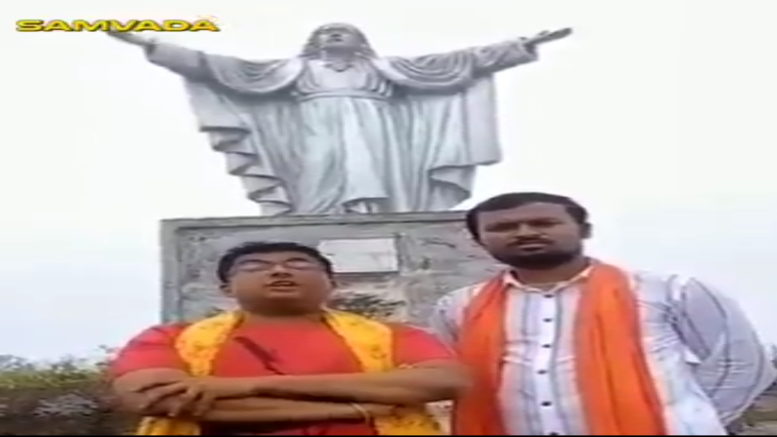 LRPF (Legal Rights Protection Forum) has brought out a serious matter of forest land encroachment in the Chikkamagalur district of Karnataka. In their complaint to the Additional Principal Chief Conservator of Forests (Vigilance), LRPF has highlighted the erection of a Jesus statue atop a hill that falls under the jurisdiction of the forest department.

The Jesus statue sits atop a hill located in Malleshana Gudda of Mudigere Taluqa in Chikmagalur District (Karnataka). The violation came to light when two members of Sri Ram Sene posted a video of the same on Social Media (SM). They have also mentioned the difficulty in trekking up the hill and the rough terrain that leads up to the top where the statue has been erected. They have further stated that one would have to cover at least an eight kilometers stretch to the top only on foot.

Considering the above information, it seems highly unlikely that the structure would have come up in a single night or that the transportation of materials would not have attracted any attention. The encroachment of forest land is a serious violation of The Indian Forest Act and cognizance of the same needs to be taken at the earliest.

This is not just a violation of the forest act but attempts to contempt of court as well. Speaking to Hindupost on the issue, LRPF Working President Shri AS Santosh stated “Hon’ble Supreme Court of India its Judgement vide citation: Special Leave to Appeal (Civil) No: 8519/2006 dated 29-09-2009 clearly stated that no unauthorized construction of any religious institutions namely Temple, Church, Mosque or Gurudwara, etc., shall be permitted on Public Street/Public Space. So, such encroachment also comes under Contempt of Supreme Court”.

LRPF has requested the Additional Principal Chief Conservator of Forests (Vigilance) to look into the matter and ensure removal of the violating structure as there are chances that the illegal encroachment may turn into a religious place attracting more people as well as encouraging encroachers to grab more forest land.

In view of the seriousness of the issue, it is expected that the forest department would act in haste and remove the statue at the earliest. Furthermore, an investigation into the matter needs to be initiated with regards to transportation of construction material, etc. and probe the possible involvement of forest department officials without whose help the entire construction seems difficult.

Only a thorough impartial inquiry would reveal the truth. In addition, action must be taken to ensure that such encroachments do not take place in the future.