For a nation steeped in passivity and which has forgotten its own civilizational legacy that some sacrifice is a must to preserve your heritage, the actions of the indomitable Bharatiya students at NIT Srinagar is a massive inspiration.

After days of perseverance in the face of a brutal police assault by J&K police, threats from senior Kashmiri students and even some teachers, angry Kashmiri mobs outside the campus, and faced with an indifferent national media  &  apathetic State Government – the students finally managed to achieve what they had set out to do, raise their national flag with pride.

Flash: JKP OUT of the campus CRPF helping to hoist Indian Flag #NITSrinagarpic.twitter.com/kUrmezGh9b

Many of these are first year students – they have braved physical and mental intimidation that would have broken many a mature adult. For most of them, this would be the first experience of staying away from parents, and one can only imagine the safety-first message coming to them from back home – “son, dont get involved in all this…think about your career.” And one can’t fault the parents for this – this is how most middle class families think. But the resilience shown by these students is astounding. We salute their spirit and hope it spreads to all corners of the country – inspired youth can change the prevailing mindset in the country of ‘mujhe kya, mera kya‘. (whats in it for me, why should I care?). And the girl students were not behind in any way!

Watch this video of one student taking 15 full-blooded lathi blows to his body, and a couple of vicious kicks…without falling down.

This is true heroism – not the manufactured paper heroes like Kanhaiya Kumar & Umar Khalid (to arrest whom the Delhi police waited patiently outside the JNU campus, unlike the marauding J&K police who entered even hostels to thrash innocent students). For our media, the students at NIT don’t qualify as worthy of coverage in the same fashion as the JNU leftists or Rohith Vemula – after all, there is no politics to be played over a bunch of middle class Hindu kids being beaten up. This defining image says it all – 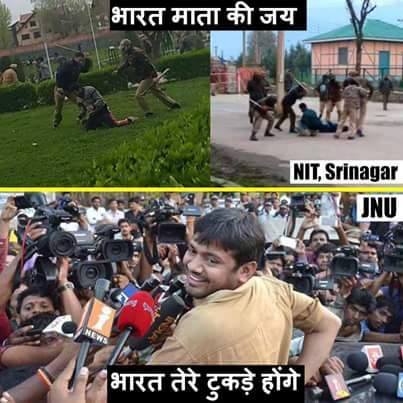 The below video exposes the lies of J&K Police that their lathi charge was in response to stones being pelted by students.

Of course, our ‘national’ media is lapping up the police version –

But this is just the beginning of the struggle these students will face. Once the spotlight shifts, these students will face a vicious withchunt – they have been threatened by college staff that their grades will suffer, outsiders have issued threats of dire consequences once ‘police leaves’, and many students have received threats on social media. It is now up to us to stand firm and support these students, and ensure that their security is non-negotiable and their academics is not marred due to this episode. #SaveNITStudents is a long term project – they stood for the nation, will the nation stand for them?