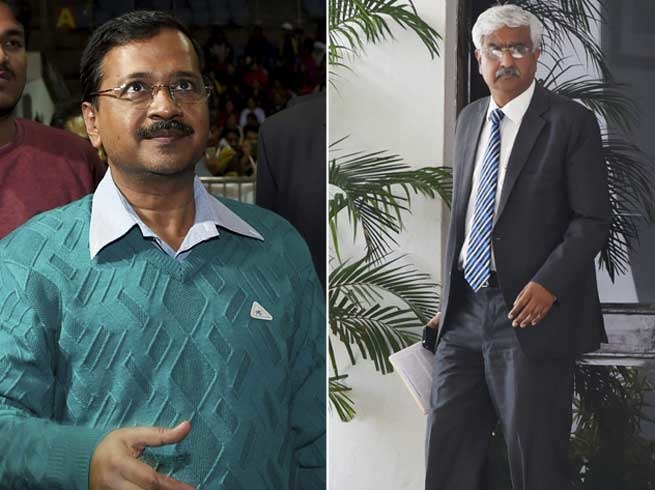 The formal complaint lodged by Delhi Chief Secretary Anshu Prakash regarding the way he was assaulted during a mid-night meeting on Monday at Delhi CM Arvind Kejriwal’s residence will send a chill down anyone’s spine – if this is the way a senior Government officer can be treated, what chance does an ordinary Delhi citizen or anyone (like volunteers, leaders) who fall foul of the Kejriwal coterie stand?

This is what an Urban Naxal govt looks like.

Highly deplorable behaviour exhibited by public representatives towards the top most bureaucrat of Delhi administration. Anshu Prakash #DelhiChiefSecretary my batchmate is a thorough gentleman and I strongly condemn the way he has been manhandled.

Arvind Kejriwal was the great hope for the liberal media in the 2012 – 2016 period, when he was plugged as the clean, young challenger to Narendra Modi. The sheen has worn off considerably from Kejriwal due to the tragicomic events involving AAP over the last 3 years, but there are still many die-hard Kejriwal fans in our national media.

One of them is Zakka Jacob from CNN-News 18 who is well known for his shrill, unbalanced anchoring style.  Jacob claimed that his channel had obtained CCTV footage that showed the CS “walking out just fine, not like a man who has been assaulted.” The sensational hashtag that he chose for the tweet -#AAPVsBabus – giving the impression that somehow the whole IAS lobby was plotting against AAP.

In the video, CS seems to be walking out just fine. Not like a man who has just been assaulted. #AAPVsBabus https://t.co/3eFKbGhbzZ

What is this video that Jacob and his channel were bandying about as ‘clinching evidence’ of AAP’s innocence?

Yes, it appears from the video that the CS Anshu Prakash is walking out from Kejriwal’s residence in the video. But did the CS claim that he was assaulted with sticks & sharp weapons that would leave hims bloodied or with clothes tattered? No, he said that he received blows on his head and temple – the kind of assault designed to leave no easily discernible trace. And even if the CS had received just one slap, are Jacob and his ilk saying that is acceptable?

Until #ChiefSecretary was carried on stretcher he wouldn't be considered as assaulted,after all who can walk after few slaps or fist full blows? investigative journalism at its best.. 😬 https://t.co/obh3wW5BA9

Incidentally, Anshu Prakash’s medical examination, conducted on Tuesday night at a Government hospital in Delhi after an FIR was registered for the assault, has shown injuries on his face and elsewhere – tenderness and mild swelling behind both ears, swelling over the right zygomatic (cheekbone) region and a bruise on the lower lip (1cm x 0.5 cm size).

Such is the solid reputation that Anshu Prakash enjoys, that even ace Lutyens’ operator Shekhar Gupta, who has mastered the art of Lutyens’ access journalism & ‘running with the hare and hunting with the hounds’, was forced to acknowledge the polite and soft-spoken nature of Anshu Prakash.

As a journalist, I’ve known & interacted with Anshu Prakash for decades, esp when he was aide to Sushma Swaraj in various ministries. He’s polite and soft-spoken to a fault. Can’t see him provoking a physical or even verbal clash. Most unfortunate this turn of events

But even in this tweet, Gupta managed to play both sides – while on the one hand he says that it is difficult to imagine the mild-mannered Anshu Prakash provoking any clash, on the other he hints at Prakash’s closeness to a BJP leader and calls what happened “unfortunate turn of events”. So the message between the lines is – ‘BJP could very well have stage-managed this whole episode”. There is no outright condemnation for the liberal (hence obviously morally superior) Kejriwal, unlike the contemptuous torrent of insults that would have ensued if BJP MLAs & CM had been similarly accused.

Kejriwal, Lalu, Rahul, Mulayam, Mamata, Owaisi, Sonia, Yechury are truly blessed in that they possess the “outer paint of left-liberalism” that deflects the sort of criticism and scrutiny that other politicians, especially those from the ‘indescribably evil and fascist” RSS/BJP camp have to face.