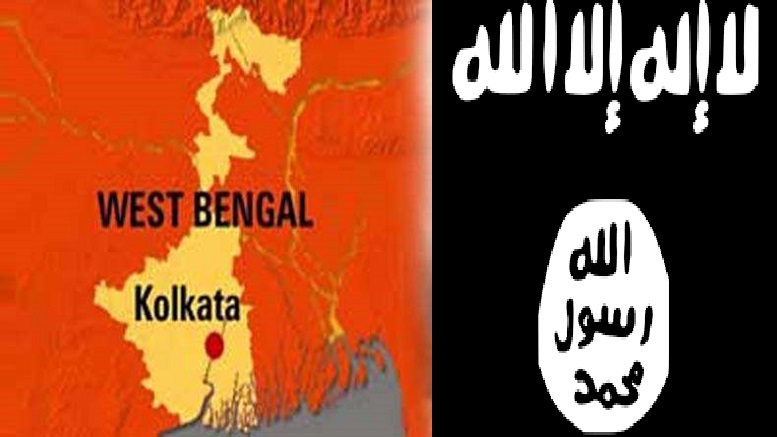 The impunity with which the writ of radical Islamists runs in large parts of West Bengal was once again on display in the form of leaflets carrying Islamic Dos & Donts fatwas (Islamic decree) for non-Muslims being distributed across various districts of West Bengal. The leaflets have the ISIS flag printed in the top right corner.

The English translation of the Bengali leaflet reads as below –

1. All commercial establishments (Cop rightE) need to have ‘bismillah-ur-rahman-ur-rahim’ (‘In the name of God, most Gracious, most Compassionate’) painted on the front doors and the premises need to have the holy Quran

2. CE need to put up the picture of Kaaba sharif (a building at the center of Islam’s most sacred mosque, Al-Masjid al-Haram, in Mecca)

3. No forms (idols or pictures or any other forms) of any Devi/Devtas and indecent pictures to be kept or put up. If any, they need to be taken down immediately as they may harm the Muslim’s imaan (faith)

4. CE need to ensure all necessary arrangements are made for the ease of offering namaz by the employees by providing space, arrangements for ablutions and enough caps so that namaz can be offered by muslims however they are

5. CE are prohibited from keeping anything HARAM (forbidden in Islam) – includes food and other items. If a muslim goes to a Hindu establishment and desires to eat cow meat, then he cannot be stopped. Similarly no muslim can be stopped from eating meat if others around are vegetarian. Christian establishments selling/ consuming haram pork meat need to stop immediately. Any haram items found on the menu are liable to punishment as per Sharia law. Similarly medicines and toiletries manufacturing cannot use haram ingredients.

6. During the Ramzan month of roza, ALL food selling establishments (hotels/restaurants/canteens) need to stay shut and none to eat in front of people observing roza. Also, for Eid, all muslim employees are to be given leaves between 4 days to 1 week compulsorily

7. As per Islamic sharia, any kind of music and playing musical instruments is haram, hence anything except hamads (a poetic piece in praise of God) praising Allah and islamic ghazal, i.e all other forms of music need to be stopped.

8. For women to step out of homes to work and roam about without purdah (female seclusion in Muslim communities) are punishable offences as per Islamic sharia. All those giving them jobs/allowing them to work are equally guilty. Hence, all women employees need to be let go immediately. In case of special circumstances where women need to be kept employed, they need to be kept in purdah and will have to wear burqa (enveloping outer garment worn by Muslim women)“

The warning signs regarding Islamization of West Bengal have been flashing for long, and the process has accelerated under the Mamta Banerjee led TMC regime, which unfortunately looks likely to come back to power for a 2nd term when state election results are announced tomorrow. Even the recent Muslim mob violence at Malda made only a minor dent on the national public consciousness,   as compared to events at JNU or Hyderabad University. Will those who shout themselves hoarse about every real/imagined incident of anti-beef activism as a sign of ‘growing intolerance’ raise their voices about the very real prospect of West Bengal turning into a sharia compliant zone akin to the Afghanistan-Pakistan border area?