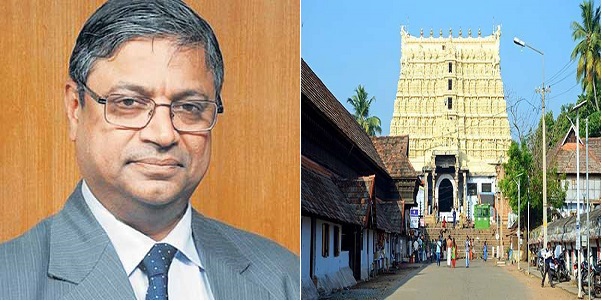 The famous Sree Padmanabha Swamy temple at Thiruvananthapuram has been in news after international attention was drawn to the collection of jewels being unearthed from the temple. Eventually, the erstwhile royal family of Travancore lost the control over the management of the temple, and since then a five-member committee appointed by the supreme court runs the temple. Besides this public stripping of authority over the temple, several instances of systematic grabbing of the temple assets by vested interests also have occasionally been revealed. Media has been detailing allegations of Land Grab at Sree Padmanabha Swamy temple. In March 2015 it was reported that the Temple authorities obtained evidence suggesting the existence of a gang which forges documents and illegally possess land owned by the temple.

Ammini Amma mother of Padmanabha Das, executed a will, to gift 14 cents of land and three buildings to R Chadrankutty who was the leader of INTUC – affiliated union of temple employees. All the four deeds were registered in 2014 after the Supreme Court-monitored process for the listing of the temple assets began.

As per revenue records, the land under survey number 560/268 is assigned as ‘Sarkar thanathu nellukuthu pura’ (government’s own paddy crusher unit). The properties under the temple are listed in the records as government-owned as it had been so before independence since all land that was not owned by anyone by default has been vested in Lord Padmanabha for he was the supreme ruler of the Travancore State. The temple priests used to process paddy to get rice for nivedyam in the old nellukuthu pura at west nada.

Interestingly the three settlement deeds are about providing land to two daughters of Padmanabha Das, a former employee of the temple who was expelled by the previous management (under the Royal family) but later reinstated as per the directive of the amicus curiae Gopal Subrahmaniam. Page 452- 453 in the final report of amicus curiae explains in detail how the persuasion by him played a vital role in the reinstatement of Padmanabha Das. Moreover, Amicus Curiae in his report (pages 452, 495) has cited the depositions by Chandrankutty, and Padmanabha Das as examples of irregularities and malpractices to discredit the Royal family.

Chandrankutty, a prominent Congress trade union leader in Thiruvananthapuram has been a lead voice among those who accused the Royal family of corruption and malpractices while he with Padmanabha Das allegedly grabbed the land belonging to the temple. Although some devotees had brought the issue of land grab & alleged forgery by temple employee and Congress party leader into the notice of the temple administration, till date no action has been taken against the perpetrators.

This blatant misappropriation of the wealth of Shri Padmanabhaswamy by the same people who were in the forefront to remove the Royal family from the temple’s helm raises serious questions over the investigations carried out by amicus curiae who used the statements of these land grabbers as evidence for discrediting the Royals. The voices asking for another independent probe by scrapping Gopal Subramaniam from the case has been increasing steadily, and this time with this revelation it seems difficult to ignore them.