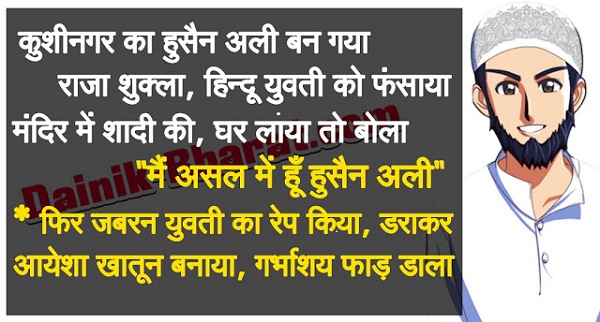 In another shocking case of #LoveJihad, a Muslim man named Hussain Ali faked himself as a Hindu named Raja Shukla and married a Hindu girl by fraud. The man is a resident of Kushinagar (village Kurmauta), Uttar Pradesh. The news has been reported in Hindi media.

The girl was from Maharashtra, and belonged to a poor family. Hussain Ali was working as painter in Baramati, Pune and gradually made friends with the entire Hindu family living nearby. The girl used to often visit her maternal uncle’s house and Ali would meet her there. He finally proposed the girl and the girl was married off to him in a nearby temple with the permission of all her relatives. The girl did not have a father.

Upon marrying her, Hussain Ali brought her to his village in UP, where she was shocked to find out his real identity. He forced her into a nikah with him, raped her. She got pregnant while living with him. On pretext of getting her checked up, Hussain Ali took her to a doctor and got an abortion done without her permission. Not only that, the victim says that he has got some procedure done on her uterus because of which she cannot ever become a mother.

The victim has reported that Hussain Ali used to torture her / cut her with blade frequently. Also, she was beaten regularly. Earlier this month, she was finally forced to sign a blank paper and was thrown out of the house by Hussain Ali and his family. It seems that after many days of delay, the local police has finally filed a case against the accused.

HinduPost spoke to Kasya police station, where the victim has filed a complaint as per news reports, to confirm this news. The concerned police authority said that the case has indeed come to them but they are treating it as a case of marital disharmony. Their reasoning – the victim has been married for 6 years and she has come to the police only now. We hope police does a through investigation, and there is no miscarriage of justice in the case.