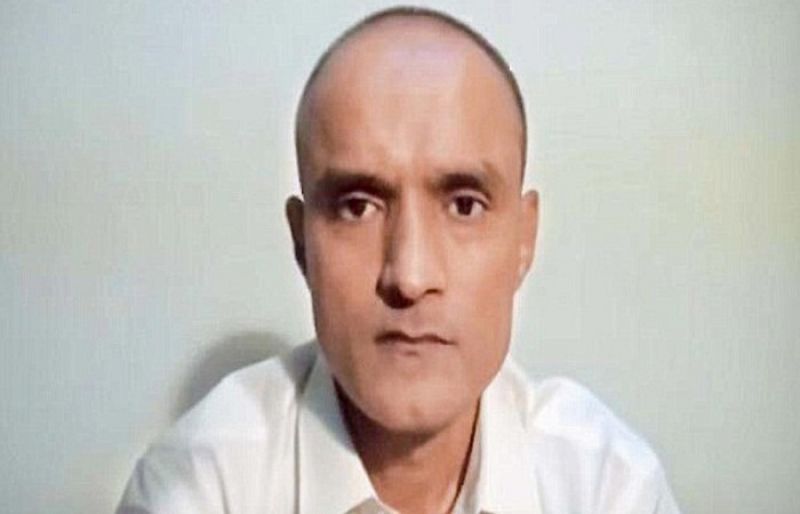 Kulbhushan Jadhav, the former Bharatiya Naval officer who in March 2016 was abducted from Iran by Jaish ul Adl, the network of Pakistan-backed terrorists operating against Iran, and later handed over to Pakistan’s spy agency ISI, has been sentenced to death in Pakistan on Monday. The charges framed against him are, waging war against Islamabad and espionage.

Reacting strongly, Bharat’s ministry of foreign affairs, in its press release, stated: “If this sentence against an Indian citizen, awarded without observing basic norms of law and justice, is carried out, the Government and people of India will regard it as a case of premeditated murder.”

The matter has once again brought to fore the utter barbarity and rogue nature of Pakistan. The reports of Jadhav being sentenced to death came out on Monday on behalf of the Military Tribunal, signed by the Pakistani Army Chief General Kamar Javed Bajwa. After these reports, the Bharatiya government summoned Pakistani High Commissioner, Abdul Basit and registered a strong protest against the death sentence. 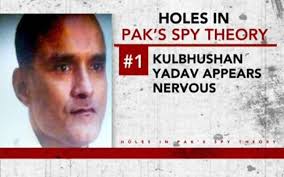 With 102 cuts, Pak army released a badly spliced ‘confession video‘ of Jadhav’s interrogation in March last year. In the video of about 358 seconds (about six minutes), more than 102 places had been unearthed as broken. Jadhav has been convicted on the basis of that fraudulent confession.

In its official statement, Bharat has made clear that there was no connection between Jadhav and the government or any Bharatiya intelligence agency. He had taken an early retirement from the Navy and was in Iran on personal business.

Jadhav was quite frightened during interrogation in the video released by the Pak army. Jadhav had appealed to the Indian Embassy officials before the questioning, which was not considered by Pakistan. The Government of Bharat, through its High Commission in Islamabad, has repeatedly sought consular access to him, as provided for by international law. Requests to that effect were formally made 13 times between March 25, 2016 and March 31, 2017.

Foreign Secretary S. Jaishankar said that the process adopted against Jadhav, which led to his execution is ridiculous. He said, “The death sentence that has been heard without any convincing evidence is ridiculous.” It is preposterous that our High Commission was not even told that Jadhav was being brought to trial.

Seasoned Pakistani journalist Nazam Sethi has indicated that the sudden verdict of death sentence to Kulbhushan Jadhav is a knee-jerk reaction by Pakistan to protect its own image from getting tarnished in the international community. Sethi went on to say that Jadhav was abducted from Iran by Jaish ul Adl, a Sunni terrorist group and an offshoot of Al-Qaeda and later sold to the Pakistani army.

It is eminently possible that Pakistan had abducted Kulbhushan Jadhav last year in order to play victim – accusing a ‘RAW agent’ of meddling in their troubled Balochistan province in front of the world, right before the visit of a high-profile Iranian delegation.

Pakistan is also increasingly desperate that the Chabahar port project being developed trilaterally by Bharat-Iran-Afghanistan will provide competition to the Gwadar port being developed by China as part of the controversial CPEC (China Pakistan Economic Corridor). “The biggest hurdle in the way of the Chabahar project, as well as all development work being carried out by Bharat in Afghanistan, is the security of people involved and any terrorist threat can significantly delay the project. Chabahar was targeted in the recent past in a suicide bombing by Jundullah in 2010, soon after the execution of Jundullah leader Abdolmalek Rigi by Iran.

Jaish-ul-Adl and its predecessor terrorist organization Jundullah were found to have links to Pakistan and Iran had often shelled its hideouts in Pakistan. 5 Iranian soldiers were kidnapped and carried away into Pakistan by Jaish-ul-Adl terrorists in 2014 in an incident that had led to heightened tensions in Iran-Pakistan relations back then.

Moreover, the Taliban continues to cultivate opium in Afghanistan. Opium and opiates like heroin are then smuggled to the sea coast of Pakistan and Iran by various networks of drug smugglers, terrorist organisations like Jaish-ul-Adl, and sometimes with the complicity of Pakistani security forces. Thus, the levers of these narco-terrorist networks lie with Pakistan’s military establishment and presently they seem to be testing what damage they can do to the Chabahar project.”

It is also noteworthy that a Pakistani Army officer Lt. Col. Mohammad Habib has gone missing from Nepal, near the border with Bharat. It is being speculated that Pakistan might have hastily announced the death sentence for Kulbhushan Jadhav to pre-empt any possible espionage charges against Habib.

“India’s security establishment is of the opinion that Kulbhushan Jadhav was tried by a non-transparent Pakistani military court, established soon after the December 2014 attack on an army-run school in Peshawar, as the Pakistani government did not have enough evidence to prove its claims about Jadhav being an Indian spy in a civilian court.

In fact, the flimsy evidence against Jadhav was revealed by Sartaj Aziz, adviser to the Pakistani PM, when he told a Senate chamber in December 2016 that Pakistan’s dossier against the retired Indian naval officer contained “mere statements” and no conclusive evidence.

German ambassador to Pakistan Gunter Mulack had said that Jadhav had been actually caught by the Taliban in Iran and sold to Pakistani intelligence.

Sources said no information was shared regarding Jadhav’s ongoing trial by the Field General Court Martial under the Pakistan Army Act. “Pakistani military courts have, over the last two years, gained disrepute of not being transparent and violating all provisions of a fair trial,” an intelligence officer said.

Statistics shared with TOI show that of the 274 convictions since February 2015 by these courts, 161 were sentenced to death. Of these, 144 convicts had “confessed” to their crimes. “Not only were these trials kept under wraps, but the accused also did not have the right to appeal, which is a key component of a free and fair trial,” an official of the Indian security establishment said.

The official said the International Commission of Jurists had in 2016 said the Pakistani “government and military authorities had failed to make public information about the time and place of their trials; the specific charges and evidence against the convicts; as well as the judgments of the military courts including the essential findings, legal reasoning, and evidence on which the convictions were based”.

External Affairs Minister, Sushma Swaraj on Tuesday issued a stern warning to Pakistan, cautioning them that they should keep in mind the consequences of carrying out the death sentence of Kulbhushan Jadhav, on the bilateral relations between the neighbouring countries. Swaraj, making a statement in Rajya Sabha, said that the NDA government would do all it can and vowed to go “out of the way” to save Jadhav. “Our position is very clear, there is no evidence of wrongdoing by Kulbhushan Jadhav,” Swaraj said.

Earlier, the Home Minister Rajnath Singh said, “It is clear that Kulbhushan had an Indian passport and after this there is no question that he was a spy. He was abducted from Iran. We were not given access to the him. Every possible effort to save him would be made.”

This is not the first time when Pakistan has murdered innocent Bharatiya prisoners. Their brutal treatment stands in stark contrast to Bharats’ excessively soft treatment of Pakistani prisoners.

Few of the significant cases are as as follows :

Kirpal Singh, who belonged to Gurdaspur in Punjab, accidentally crossed the Pakistan border in 1992. There, a lawsuit for bomb blasts in the Punjab province of Pakistan was filed against him. He remained in jail for 25 years. Despite being acquitted by the Lahore High Court, Pakistan did not liberate him. He died in Lahore’s Kot Lakhpat jail under mysterious circumstances.

On February 2014, the news of the death of Bharatiya fisherman, Kishore Bhagwan, in Pakistan’s prison broke in the media. He was accused of entering Pakistan without complete documents and the Maritime Security Agency of Pakistan arrested him. In 2013, Kishore tried to flee from jail, but was caught. He later died in jail due to unknown reasons.

Sarabjit Singh of Tarnaratan district of Punjab was accused in 1990 of involvement in bomb blasts in Punjab province of Pakistan. He too had accidentally crossed the Pakistan border when he was arrested.  While in prison at Kot Lakhpat Jail, Lahore in April 2013, he was attacked by fellow inmates and died six days later.

Sarabjit’s sister Dalbir Kaur has urged the government to take all possible measures in the case of Kulbhushan Jadhav, including approaching the International Court. She said, “I can understand the pain of Jadhav’s family”.

The Pakistani Army arrested Chamel Singh in Jammu district in 2008 for charges related to spying. According to his family, he accidentally crossed the border while working in the fields. In 2013, he lost his life by the beating of policemen in Lahore’s infamous Kot Lakhpat jail.

Inspite of such heinous crimes being committed by Pakistan, there are political parties in Bharat which still stand in favour of unconditional dialogue between the two nations.

How long can Bharat afford to be magnanimous with Pakistan. Enough is enough. For starters, we should immediately recall our High Commissioner from Pakistan and downgrade diplomatic relations to the bare minimum. If Pakistan still proceeds with the cold-blooded murder of Kulbhushan Jadhav, we need to declare Pakistan a “terror state” and break all diplomatic ties.

Pakistan, being the hub of global terrorism, trains and nurtures terrorist shamelessly (accepted by their retired generals and defense ministers) and carries out its dual-faced policy against Bharat.  A country ruled by the collaboration of the ISI and the Army deserves not more dialogue, but more surgical strikes.