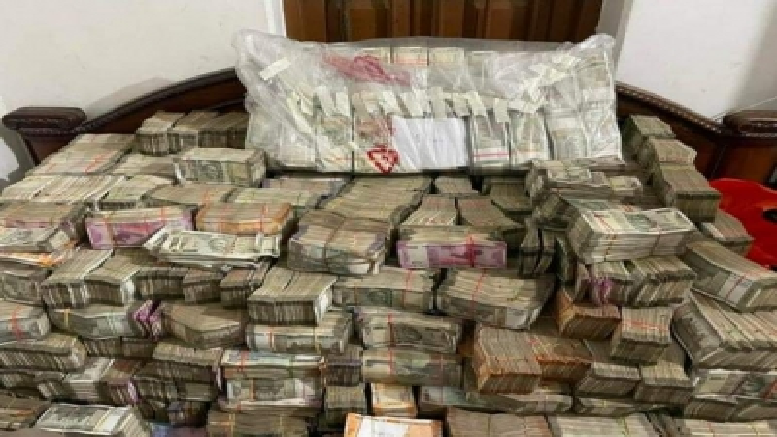 As counting of notes seized by the Enforcement Directorate (ED) from the residence of city-based businessman Nasir Khan and his son Amir Khan in connection with the mobile gaming app fraud continues on Saturday evening, more Trinamool Congress leaders are coming up with their own logic to criticise the central agency action.

According to sources, over Rs 16 crore have been recovered till now from the Garden Reach residence of Amir Khan, who allegedly launched a mobile gaming application named E-Nuggets, which was designed for the purpose of defrauding the public.

Veteran Trinamool leader and three-time Lok Sabha member Saugata Roy claimed that the ED raids are deliberately meant to deprive the Trinamool Congress from any assistance from the business community in the future.

“This is not happening just in case of Trinamool Congress. This happens in any state which is not ruled by the BJP. The idea is to conduct raids and search operations at the premises of businessmen so that they refrain from helping the Trinamool in future. But ultimately such ploys will not work out. In the past, there had been several actions by the central agencies in the state. But nothing happened,” Roy said.

Earlier on Saturday afternoon, when the recovery amount was Rs 8 crore, state minister and Kolkata Mayor Firhad Hakim said the continuous raids and search operations by the central agencies, in his opinion, are part of the Union government and BJP’s ploy to show West Bengal in bad light and to destroy the state’s economy.

Incidentally, the residence of Nasir Khan and Amir Khan at Shahi Astabal Lane in Garden Reach falls under the Kolkata Port Assembly constituency, which is held by Hakim since 2011.

Meanwhile, ED sources said that Amir Khan, who is the mastermind behind developing and launching the mobile gaming application that duped people of several crores of rupees, is absconding and his three mobile phones are switched off since Saturday morning.

ED officials are currently questioning his family members to find out his whereabouts.

As opposition leaders have started targeting Hakim alleging his connections with Nasir Khan, Hakim has said that recovery of money from the residence of a businessman that comes under his constituency does not make him an accomplice in the matter.

ED started conducting raids on Saturday morning under the provisions of Prevention of Money Laundering Act (PMLA) at six premises in Kolkata.

According to sources, the case was registered at the Park Street police station based on a complaint filed by Federal Bank authorities against Aamir Khan and others.

“Amir Khan had launched a mobile gaming application named E-Nuggets, which was designed for the purpose of defrauding public. During the initial period, the users were rewarded with commission and the balance in the wallet could be withdrawn in a hassle-free manner. This provided initial confidence to the users, who started investing bigger amounts for greater percentage of commission and a greater number of purchase orders,” said an ED official.

The official said that after collecting handsome amounts from the public, all of a sudden withdrawal from the said app was stopped at one pretext or the other.

Thereafter, all data, including profile information, was wiped out from the said app server.